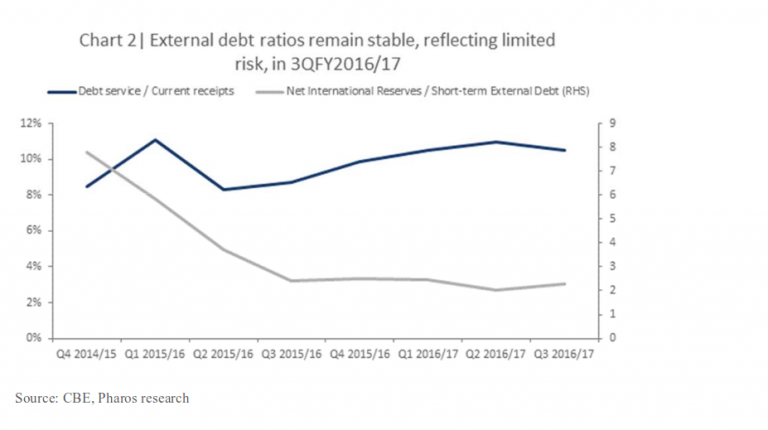 A recent research issued by Pharos said that Egypt’s external debt ratios continued to reflect limited risks, as the foreign debt pile of the most populous Arab country represented 42.7% of GDP by the end of the fourth quarter of the fiscal year 2016/17.

Moreover, the government contribution to the increase in the total external debt recorded 3.6% on May’s USD3 billion international bond issuance, followed by ‘other sectors’ contribution,  which includes the private sector, recording 2.7%.

The cash-strapped country has been borrowing from abroad to fund its budget deficit and boost its balance of foreign reserves after a years-long dollar shortage sapped its ability to import and slowed economic activity.

Egypt’s net foreign reserves have been rising steadily, hitting a record in September.

The increase has been driven by heavy external borrowing as investors pour money into Egyptian assets following the government’s lifting of most currency restrictions and the IMF’s approval of a $12 billion loan.

A total of $14 billion have flowed into Egyptian treasury bills, which are among the highest yielding in the world.

The Egyptian financial year starts early July and lasts until the end of June of the following year.

Debts to the foreign oil companies represent a massive share of the country’s total external debt, which amounted to $3.4 billion last June. The government paid $100 million accumulative arrears owed to foreign companies in 2015/2016.

Since the beginning of last year, Egypt has embarked on a plan to introduce a number of fiscal reforms, including fuel subsidy cuts that increased prices by up to 78 per cent, as well as imposing new taxes to ease a growing budget deficit that is currently estimated at 12.2 per cent of GDP.

The country has been negotiating billions of dollars in loans from various lenders to help revive an economy hit by political upheaval since the 2011 uprising, and to ease a dollar shortage that has crippled imports and driven away foreign investors.

Earlier this month, the country received the final instalment of the first $4 billion tranche of a $12 billion loan from the International Monetary Fund (IMF).

In mid-August 2016, Egypt reached a staff-level agreement with the IMF over the three-year $12 billion loan to endorse the country’s fiscal reform programme, which the government embarked on in 2014 in an attempt to curb the growing state budget deficit.

The country is expected to receive a third instalment of $2 billion from the IMF between December and January, following the next review to take place between November and December, finance minister Amr El-Garhy told Daily News Egypt in an interview last month.