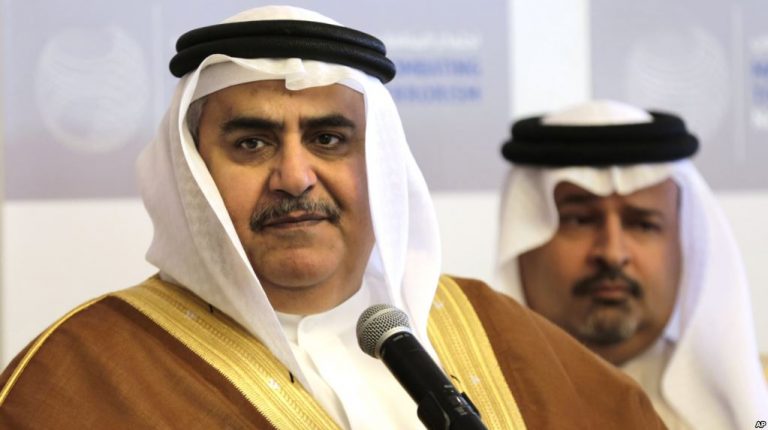 Bahraini Minister of Foreign Affairs Khalid bin Ahmed Al-Khalifa said Sunday, that his country may not attend the upcoming summit of the Gulf Cooperation Council (GCC) which is set to be in December in Kuwait, unless Qatar changes its position.

“The right step to keep the GCC is to freeze Qatar’s membership until it uses its brain and agree our countries’ demands,” Al-Khalifa said in a tweet on his account on Twitter.

The Bahraini minister accused Doha of approaching to Iran and bringing foreign forces to the region. “If Qatar believes that its stalling will give it time until the upcoming summit of the Cooperation Council, it would be wrong, if the situation remained as it is now we will attend the summit,” he added.

Meanwhile, the ministers of media of the four countries boycotting Doha met on Sunday in the Bahraini capital city Manama. They accused Doha of inciting hatred and isolating the Qatari people, as well as intervening in the internal affairs of the Arab countries.

In an interview with the US TV CBS, Emir of Qatar Sheikh Tamim bin Hamad Al-Thani expressed his country’s readiness to involve in direct dialogue hosts by the US to end the Gulf crisis, and he is waiting for the response of the four countries on the invitation of US President Donald Trump for dialogue.

“We want to end the crisis, but our sovereignty is a red line. We don’t accept anybody interfering our sovereignty,” Tamim said. He also added that “the difference between us and them during the Arab Spring is that we stood by the people. They stood by the regimes.”

22% growth in electronic payments market in Egypt throughout 2016