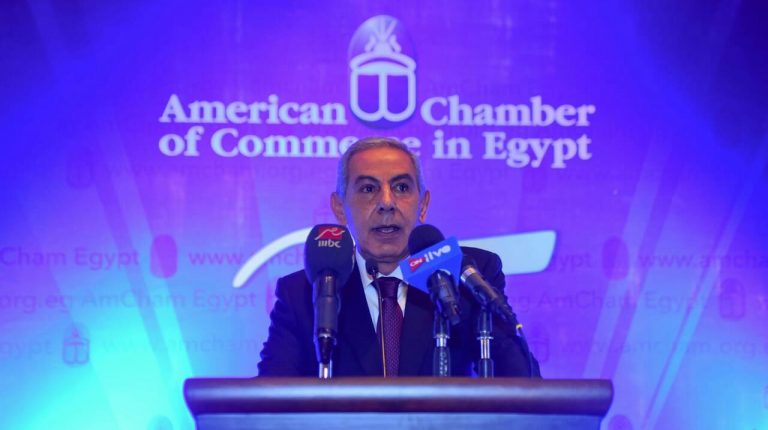 Minister of Trade and Industry Tarek Kabil said that the ministry is still holding negotiations to reduce the proportion of the Israeli component, but stressed that the role of the American side is very important in these negotiations because of its ability to influence the Israeli side.

The minister said during his meeting yesterday evening with members of the American Chamber of Commerce in Cairo (AmCham) that reducing the Israeli component is not of great importance, as it will only contribute by $20m to exports.

According to the minister, the ministry is working to expand the QIZ zones and to raise awareness of their importance, since this is more important than reducing the proportion of the Israeli component, and will achieve a greater boom in exports.

Kabil stressed the commitment of the government to implement measures to reform the Egyptian economy and take serious steps to achieve its objectives, noting that the government will go ahead with its economic programme despite the great challenges it faces.

“The current government has been forced to implement the most aggressive economic programme, but all economic indicators confirm that we are on the right track,” he said.

“We are trying to strike a balance between tough reform measures and low income citizens.”

The government seeks to create an environment of joint cooperation with the private sector and support all initiatives aimed at overcoming the obstacles facing the business community. He called on the member companies of AmCham to maximise the benefit of the economic reform system implemented by the current government to serve the interest of these companies and the Egyptian economy.

Moreover, during the meeting, Kabil noted that the second part of the industrial map within two days to encourage investors to pump money in Egypt.

Kabil said the ministry had issued 3,536 approvals of new industrial projects with investments of EGP 70bn, which created 136,000 new jobs in the past fiscal year. In addition, the ministry granted 1,407 approvals of expansions with investments of EGP 83bn, which created 98,000 jobs, as well as establishing three industrial complexes in Beni Suef and Fayoum, next to allocating 900,000 sqm to build four new industrial complexes for small and medium enterprises in Sadat and 10th of Ramadan cities.

The minister pointed out that the procedural facilities implemented by the ministry included the issuance of industrial licenses in less than 30 days, most only after 7 days, compared to 634 days in previous years, noting that the ministry provided 11.5m sqm of industrial lands in 2016, compared to 9.5m sqm in 2008 through to 2015. These lands are in Port Said (1.5m sqm), Quesna (500,000 sqm), 10th of Ramadan (5m sqm), Sadat City (2.4m sqm), Badr (1m sqm), in addition to Kafr Dawar and Mahala.

Kabil said the ministry launched a strategy to promote foreign trade, which included the development of export infrastructure. This includes training of 3,743 exporters on export and logistics operations. The ministry also supported participation in 142 foreign exhibitions, as well as financing delegation for 1,000 exporters, mostly from Africa, in addition to financing imports for 22 companies with a capital of EGP 841m and expanding in establishing logistics centres and establishing promotion and service centres for exporters.

No free trade zone with the US any time soon: Kabil