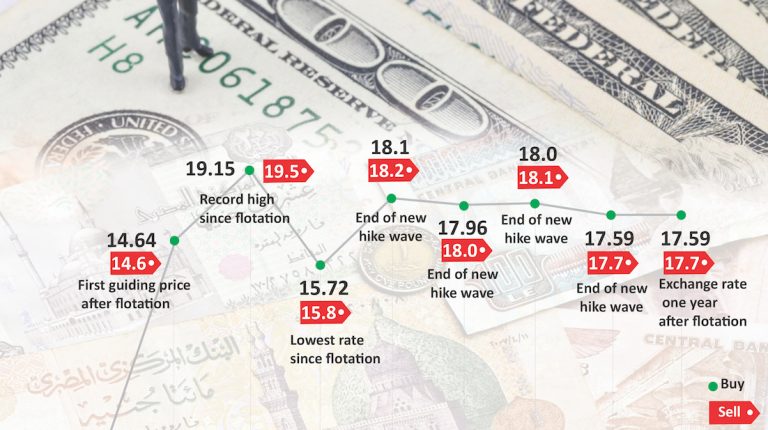 On 3 November 2016, the Central Bank of Egypt (CBE) took its boldest decision to be ever made in the history of the Egyptian financial and economic sectors: the flotation of the national currency.

A year has since passed, and the economic condition has seen many developments.

Flotation supporters and critics have spoken out. But the fact remains: the CBE took this step and will not retreat.

Exchange rate doubled to rate prior to flotation

The exchange rate moved up and down quickly in the first two weeks of the flotation decision. Officials of the exchange rate departments at banks described these moves as normal.

According to the CBE, the dollar price jumped nearly a month and a half after the flotation, on 20 December 2016, to EGP 19.153 to buy and EGP 19.5605 to sell. This was the highest exchange rate of the dollar against the pound in history.

Before the end of December 2016 through to the beginning of September 2017, the dollar has embarked on several up and down cycles, a few days each.

The exchange rate hike after the flotation led to high tides of prices, especially the imported goods. This reflected on inflation, which soared 35%—a record high. Some of the prices have also been affected by the subsidy cut plans that Egypt has embarked on recently.

In a bid to curb inflation, the CBE raised interest on the pound 7% three times. The interest rate has hence reached its highest record.

According to the CBE, foreign investments in government debt instruments since the flotation until now amounted to $18bn, compared to $25m before the decision.

As government debt instruments become more attractive, while obtaining the approval of the economic reform programme from the International Monetary Fund (IMF), Egypt returned again to international financial markets. The Ministry of Finance has put forward three issues of treasury bonds in January 2017, through which it attracted $4bn. It also successfully presented another offering on 31 May 2017 worth $3bn.

As Egypt obtained the first tranches of the loan from the IMF and the CBE managed to obtain several billions of dollars from a number of countries, such as China, foreign exchange reserves at the CBE started to increase again quickly, from $19bn before the flotation to over $36bn by the end of September 2017, which can cover Egypt’s imports of basic commodities for over eight months.

Despite the negative consequences, the flotation was a gold pot for banks in Egypt, as foreign cash started, once again, to funnel into them.

CBE Governor Tarek Amer said that inflows of hard cash since the flotation until now reached $80bn, including $35bn from Egyptian clients, $18bn of foreign investments in treasury bills, $20bn of external loans, and $7bn of dollar-denominated bonds offering abroad.

A big bulk of the funds obtained by banks, if not all, have been channeled to meet their clients’ needs of hard cash, especially for imports that have been listed according to priority by the CBE. On top of the list were the basic commodities.

As the hard cash availability problem eased, banks have then mitigated their restrictions on electronic card usage abroad, which were imposed during the peak of the problem.

Moreover, the CBE itself lifted some restrictions on repatriation of funds and became more capable of paying the installment of loans and foreign obligations compared to the period before the flotation.

Jump in deposits and loans

The decision to liberalise the exchange rate also had an impact on the banks’ deposit and loan numbers, which witnessed a big jump following this decision.

Total deposits at banks, aside from the CBE, recorded EGP 2.224tn at the end of October 2016. This figure hiked to about EGP 3.07tn at the end of July—only four months from the flotation. This reflected an increase of over EGP 846.177bn, according to the CBE.

A senior official at the CBE attributed this increase to the rise in the exchange rate following the flotation and the re-evaluation of the deposits and loans in hard cash on basis of the new rate.

This scenario also happened with the hard cash loans portfolio at banks, where the size of loans in foreign currencies at the end of October was at EGP 286.74bn, hiking to EGP 547.543bn at the end of July 2017.

The official who spoke to Daily News Egypt said that banks, at the end of each month, re-evaluate the assets and liabilities in foreign exchange, including deposits and loans.

According to the head of the treasury sector of one of the banks operating in the local market, the CBE sets an exchange rate for banks on the last day of each month, on which basis the loans and deposits denominated in hard cash are re-evaluated.

The CBE figures show that the jump in deposits was not only a result of re-evaluation assets, but also from issuing the high-yield investment certificates, some of which were offered with an interest of 20% for 18 months, which attracted EGP 200bn from outside the banking sector.