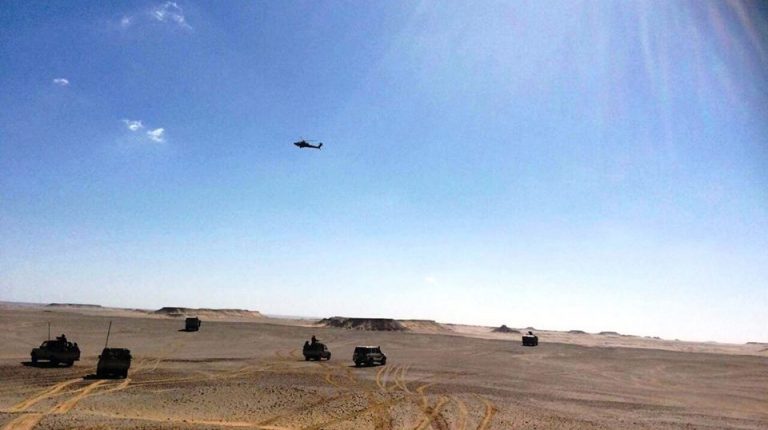 A new militant group called Ansar Al-Islam on Friday claimed responsibility for the deadly attack that targeted Egyptian security forces on 20 October. The attack resulted in the killing of 16 policemen, according to the Ministry of Interior.

The announcement came two weeks after the attack, which killed 16 policemen, close to Wahat Road 135 km south of Cairo, in the Wahat Desert in Egypt’s Western Desert, after the national security had received information about the camp.

The group did not provide any evidence proving its responsibility, but just a statement.

“It is the lions’ den battle in the Wahat Al-Baharia region on Cairo’s borders that we started our jihad and we got victory—with the help of God—on the campaign of the enemy,” the statement of Ansar Al-Islam read.

The group said that it had captured a policeman during the attack and the Egyptian navy forces attacked the group 11 days after the attack, leaving a number of casualties among the militants. “We have freed all the conscripts,” it said, calling on the Egyptian people to join and support the group.

The statement pointed out that one of the militants, named Emad Ahmed Abdul Hameed, was killed during the attack. Reuters quoted an official in the Ministry of Interior saying that he cannot ensure or deny the announcement of responsibility.

Two security officials and a doctor at the Forensic Medical Authority said that the DNA of the militants who were killed in the military and security operation proved that Abdul Hameed is one of the dead. They added that he was a former officer in the Egyptian army and the deputy of former military officer Hesham Ashmawy, according to Reuters.

On Tuesday, the Ministry of Interior announced the rescue of police officer Mohamed Al-Haith during a raid against terrorist suspects in western Fayoum, which included a military air strike. Al-Haith went missing during the security operation on 20 October.

The targeted suspects are believed to have been involved in the Wahat shootout, which killed 16 policemen according to the Ministry of Interior. The ministry said that 15 militants were killed during the operations in the Western Desert.

On Wednesday, the military spokesperson said that it had conducted another air strike in coordination with the police, which targeted and eliminated the rest of the perpetrators who escaped Tuesday’s operation. The forces targeted a hideout in western Fayoum, where they also destroyed four vehicles.