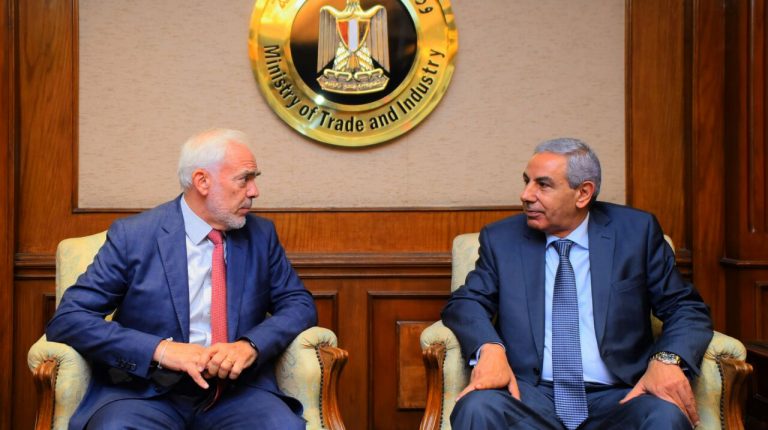 Minister of Trade and Industry Tarek Kabil said that the volume of trade exchange between Greece and Egypt increased 2.8% this year in the period from January to September compared to the same period last year.

He explained that the trade exchange reached €894.5m this year in the period from January to September compared to €869.6m in the same period last year.

Kabil added that the value of Egyptian non-oil exports to Greece rose by 39% in the first nine months of this year to reach €136.6m compared to €98.3m in the same period last year.

He pointed out that the value of Greek investments in Egypt is $155m, represented in 160 projects in the sectors of industry, services, construction, tourism, ICT , finance, and agriculture.

This came during the minister’s discussion session with the Greek Ambassador to Egypt Michel Christos Diamisis.

During the session, they discussed the ways of enhancing bilateral economic relations between the two countries and the possibility of increasing bilateral trade and joint investments between Egypt and Greece during the coming period.

Furthermore, they discussed preparing for the participation of the minister on behalf of President Abdel Fattah Al-Sisi in the activities of the second session of the Arab European Summit in Athens from 9 to 10 November under the slogan of “Towards a Strong Alliance”.

He pointed out that the summit will discuss ways to strengthen bilateral relations and promote economic partnerships between the countries of Europe and Arab countries.

Kabil pointed to the need to increase rates of intra trade and joint investments between Egypt and Greece to keep pace with the level of political relations distinguished between Cairo and Athens.

The summit aims to bring European and Arab officials together with representatives of the business community to encourage further discussions on economic and political cooperation since its first edition.