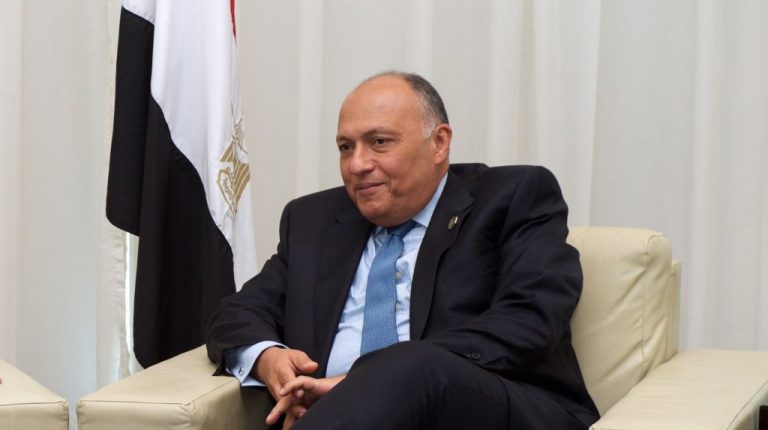 Foreign Affairs Minister Sameh Shoukry wrote a new article published on the ministry’s blog, coinciding with President Abdel Fattah Al-Sisi’s launching of the International Youth Forum in Sharm El-Sheikh. The forum was also the subject of other op-eds in Sunday’s daily local newspapers.

Shoukry dedicated his article to presenting the efforts of the Egyptian government in empowering the youth. Two facts he stated are that young people led the change in 2011 and 2013 and they represent over half of the population.

“As a starting point, the government recognizes that education reform is key to improve human capital and achieve social and economic development,” the article reads, continuing that there are “many ongoing projects” to develop the educational system, in addition to political and economic empowerment considered as top priority for the current leadership.

The ongoing youth forum comes among a series of similar conferences attended by Al-Sisi.

State-owned daily Al-Ahram covered the forum as its main story for Sunday’s issue. Managing editor Abdel Mohsen Salama, also the Head of Press Syndicate, praised the conference which he said was taking place amid serious challenges in Egypt and the Middle East , the most dangerous one being terrorism, “promoted by older people but trapping the younger ones.”

On the other hand, Mohamed Saad Abdel Hafiz,  Al-Shorouk private newspaper journalist and member of the Press Syndicate’s council opposition front – wrote a sarcastic piece in which he warned authorities to be cautious about whom they invite to the forum, of which the slogan is “we need to talk.”

Abdel Hafiz pointed out that European journalists invited to the forum might raise undesirable questions about press freedom in Egypt such as the blocking of independent media websites or request information on detained journalists or state control of all types of media.

Meanwhile, Makram Mohamed Ahmed Head of the Supreme Council of Media and journalist in his column addressed Emir of Qatar Tamim bin Hamad Al-Thani’s interview with Charlie Rose on CBS’ 60 Minutes raising criticism regarding the policies of Qatar in the Middle East arguing that it is helping Iran expanding its powers in Lebanon, Syria and Iraq.

Ahmed argued that despite the admission of such threats, US President Donald Trump’s tone has eased on Qatar to safeguard US-Qatar interests, while the four boycotting states remain cautious. FM Sameh Soukry met with his counterparts from Saudi Arabia, Bahrain and the UAE Saturday discussing the latest development on the Qatar crisis.

Journalist and TV host of a show on the pro-state Sada El-Balad channel Hamdy Rizk’s column’s was titled “Critical information in the Regeni case”, which wasn’t as much focused on the murder but rather on defending the Italian student’s academic supervisor and Cambridge professor Maha Abdel Rahman’ “patriotism” by denying her links to the Muslim Brotherhood.

Rizk claimed to have received information by Abdel Rahman’s family saying the professor was falsely reported in the media as another Islamist researcher – who founded the Turkey-based Egyptian Revolutionary Council of the Muslim Brotherhood in the aftermath of 2013.

Another piece by artist and writer Waguih Wahba featured in the newspaper reviewed La Repubblica’s Thursday report claiming insincerity on behalf of Abdel Rahman, stating that the Italian media is still pointing fingers to the Egyptian security bodies and directly accusing the Sisi regime of covering up for murderers and torturers.

He opinionated that the Egyptian state did not implement a smart media plan which made it easily put under suspicion, although he wrote that he fells the Regeni murder was not “an intended crime by the state.”