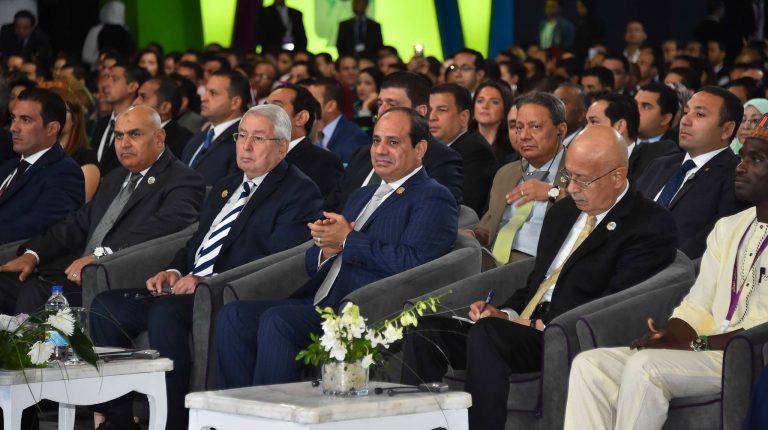 President Abdel Fattah El-Sisi participated Monday in the ‘Egyptian Experience in Creating Future’ session amid the second day’s activities in the World Youth Forum (WYF) held for the first time in Sharm El Sheikh between 4 and 10 November.

Egypt has a major challenge of communicating with the Egyptian youth, Sisi said, asserting that the state has a true political will to support the young people and pave the way for them to participate in building the country’s future.

El-Sisi pointed out that Egypt has millions of unemployed youth representing a huge challenge for the state. He stressed that facing this challenge requires cooperation between both the government and the society.

Furthermore, the president noted that the national mega projects launched by the government in recent years aimed partly to provide millions of jobs for youth in different fields, even if they are temporary. These projects, such as road networks, the new Suez Canal, power plants and industrial zones, also changed the “image of Egypt” and boosted the country’s capabilities.

He added that the state adopted many employment initiatives, most notably the Central Bank of Egypt’s (CBE) initiative in 2016 to provide EGP 200bn to 350,000 small and medium enterprises (SMEs) with a declining interest rate of 5% on loans over the next four years.

Moreover, he mentioned that Egypt had a significant experience in the 25 January revolution which embraced the importance of communication with youth to boost their confidence, stressing that the youth can play a great role in building the modern Egypt.

On the other hand, El-Sisi tackled the housing problem in Egypt, saying that the government made a plan to provide affordable housing units for different community segments. He added that the ministry of housing set a timetable until 30 June 2018 to build 200,000 housing units for the inhabitants of slums and poor areas.

El-Sisi applauded the government’s efforts in establishing the EKB that offers massive amount of knowledge free of charge for everyone.

El-Sisi concluded his word with renewing his commitment to examine cases of young Egyptians detained since the events that followed the 25 January revolution through the presidential committee formed for this purpose.

The session speakers included the Minister of Planning and Administrative Reform, Hala El-Said and the Minister of Education, Tarek Shawky, as well as some graduates of the Presidential Leadership Program.

They discussed Egypt’s experience in establishing platforms for the rehabilitation of young people in different fields, notably the National Youth Academy for Training and Empowerment and the Presidential Leadership Program. The speakers reviewed what has been achieved so far in this regard.

Egypt launched on Sunday the WYF, calling on the Egyptian and global youth to adopt objective dialogue and peaceful coexistence without discriminating against age, race, gender or party in order to build the future and civilization.

The forum, which concludes on Friday, brings together over 3,200 youths from 113 states representing different parts of the world under the slogan of “We Need to Talk.”

The idea to hold an international youth conference in Egypt came during the third National Conference of Youth (NCY) in Ismailia.
The forum includes 46 sessions and workshops to discuss various key issues, including the youth employment to achieve sustainable development, as well as fighting terrorism, extremism, and illegal immigration.