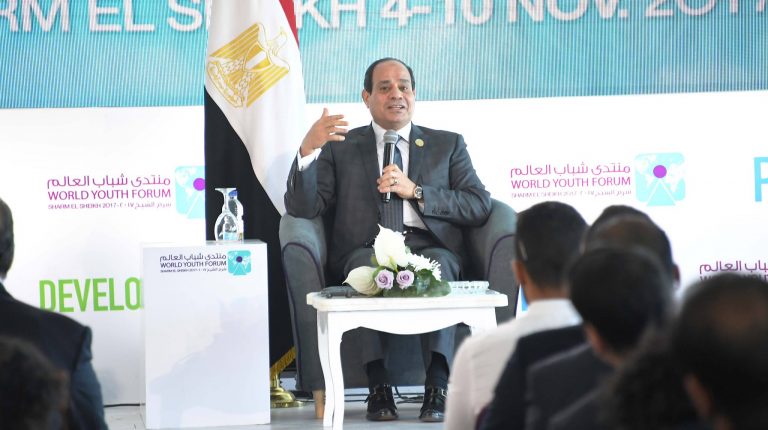 President Abdel Fattah Al-Sisi said that he is not supporting an amendment to the 2014 Constitution, during his interview with US news channel CNBC that came on the sidelines of the World Youth Forum (WYF).

Al-Sisi asserted that he respects the current constitutional article stipulating that the country’s president can only serve two four-year terms.

In mid-August, there were calls raised in parliament by some members to amend the 2014 Constitution to extend presidential terms from four years to six.

The upcoming presidential election is scheduled to take place next April or March. The president has never publicly mentioned that he is going to run for the next election. Every time he has been asked about the possibility of his candidacy, he states that he will not oppose the will of the people.

Al-Sisi confirmed that he is not going to run in the election if people did not call him to do so, in his interview with editors-in-chief of national newspapers in August, and during a discussion about presidential elections at the third National Youth Conference.

He added that there is already great development occurring in Egypt regarding the situation of the president.

“What we have to bear in mind is that there is no president who would be able to to take power against the will of the Egyptian people, and will not be able to continue for another period without the people’s approval,” the president continued.

In late October, a campaign named “To Build It” announced that it collected 3,770,300 signatures from citizens to support Al-Sisi to run for a second presidential term, according to state media.

Founders of the campaign said in a press conference that the number of signatures collected in a short period reflects the popularity of Al-Sisi. They added that the campaign will also continue in other governorates, and launch a website to reach more Egyptians home and abroad.

Al-Sisi came to office in 2014 after the ouster of former Islamist President Mohamed Morsi in 2013.