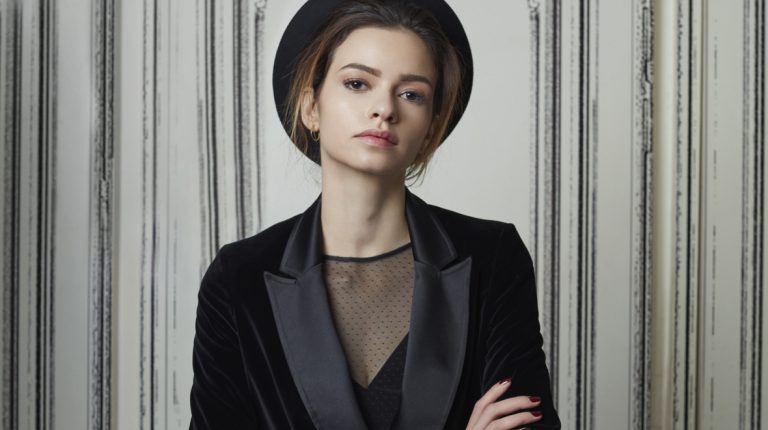 As she makes her way through every day’s morning routine, she recites the ongoing to-do list of the day ahead. She glances at the clock every few minutes; attempting to calculate the number of duties she will be able to fulfil in a matter of few hours.

As her head drifts to the notes stashed in her briefcase regarding the upcoming meeting at noon, she also smiles in a relief as she remembers the girls’ dinner waiting for her at the end of the day.

With many things lined on her schedule, she reaches into her wardrobe and picks one of her newest fashion finds; a not so classic blazer. While the crawling guipure suggests a flirtatious night under the spotlight, the traditional grey wool and structured tailoring makes it a fit for the meeting room.

The lady Nancy blazer is a wearable representation of how the concepts of muscularity and femininity currently walk hand in hand after years of societal campaigns and political shifts. This particular design is one of many other blazers that intent to capture attention and tackle the thinning lines between modern gender roles.

Parallel is a FW18 collection dedicated to blazers, which unfold the societal shifts that forever changed the barriers surrounding women and keeping them grounded to their households. Designed by Farida Nagib, this collection is a new chapter told by the King’s Mother.

The local fashion brand, which has fully embraced the goal of reshaping the traditional perimeters of blazers, is known for exquisite tailoring and innovative cuts. Season after season, the ready to wear label manages to prove how far a blazer can go in order to interpret new concepts and connect with a wider audience.

Their designs are a fashion investment that balances the wearer’s personal statement as well as the timeless flair of blazers. From pleated sleeves to lace high-necks, the collection embraces glimpses of softness that shine against the masculinity of fabrics and silhouettes.

On parallel, Nagib once again depends on high-end fabrics including traditional Saville Row soft wool-twill made in the heart of England at Dugsdale Brothers, season’s favourite material, velvet, and structured jacquard, as well as playful pleated chiffon.

On the other hand, lace is introduced through several techniques such as the removable vests that can be added to many of the blazers; giving the wearer an easy path at recycling the same blazer.

Daily News Egypt met Nagib to talk inspiration, being specialized in one type of garments and future plans.

What is the main inspiration behind the new collection?

In the early 1900’s, the world saw a shift in gender roles after the First World War. This era witnessed an extreme reinterpretation of women’s stereotypical roles. The working woman rouse to the forefront after developing a newly found self-confidence.

Women had done much to keep the world working during the war – and by obtaining the right to vote, the world order started to change, never going back to how it was. From playing a domestic role to being providers for their families as well as being active members of society, women were becoming more economically independent in the process.

Changes in women’s roles predictably were reflected in the fashion of the time. Our new collection focuses on this particular shift; portraying it through mixing femininity and masculinity through aesthetic, cuts and fabrics.

Why did you choose to name it Parallel?

I chose Parallel because it defines the parallel worlds of men and women in our current day. The collection captures the societal shift, when women took over the roles of men in many households post the WWI.

Parallel also portrays how the concepts of masculinity and femininity have developed from that moment in time until our modern day; as today they seize to represent complete opposites, instead they walk in parallel lines.

How long did it take you to come up with this collection?

I have always known that I wanted to do a collection based on this concept in order to portray that contrast through the mix of fabrics; I am always intrigued to showcase the contrast between opposing subjects or items.

The development stage of researching, designing, sampling and finalising our samples took six months to reach the collection, which you see today.

Why did you pick Sane as the launch venue?

We picked Sane because it is a hub for art and design for all ages. Meanwhile, its location in central Cairo makes it easily accessible for everyone.

Can you tell us more about the collection’s star item(s)?

What encouraged you to start a brand specialised in blazers?

I have always wanted to have a product-specific brand that can then evolve and grow to include other products; but, to always be recognised for the initial star product. Just in the same fashion DVF has the iconic wrap dress and Burberry has the iconic trench coat; I want The King’s Mother to establish the iconic blazers as the go to blazer.

How does being specialised in blazers reflect on your brand in terms of awareness and sales? Does it make your brand further stand out or does it puzzle the majority?

They go hand in hand, the concept is new to some people; nonetheless, when explained, they like the idea and the vision behind the brand. For others who have blazers as a staple in their wardrobe, they are very interested and it makes the brand further stand out to them.

Where do you dream to see your designs?

Our goal is to see The King’s Mother obtaining more international presence in different markets and to continue growing in all aspects.

34% of Egyptian families are headed by women, equivalent to 8m families

Colours of Joy: a rainbow of local eyewear for every woman