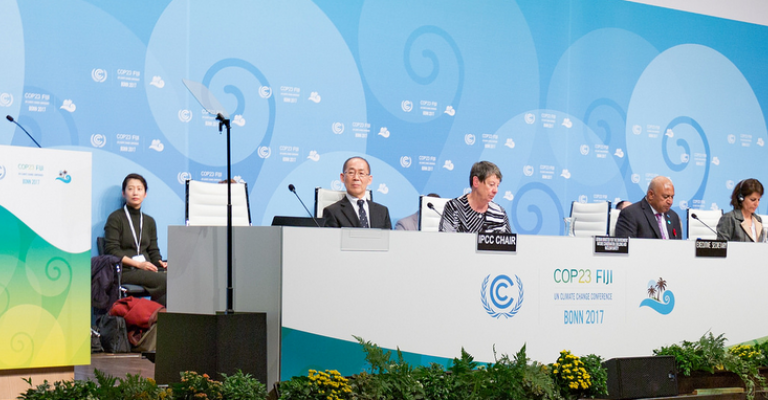 The 23rd annual UN climate conference (COP23) kicked off in Germany’s Bonn on Monday, with about 20,000 participants representing 200 countries, calling for a strong stance to maintain the path of the Paris Climate Change Agreement.

“All over the world, vast numbers of people are suffering—bewildered by the forces ranged against them. Our job as leaders is to respond to the suffering with all means available to us,” said the newly elected COP23 president, Fijian Prime Minister Frank Bainimarama. “This means to meet our commitments in full, not back away from them.”

He added that Fiji is working to build a “Grand Coalition” throughout the year between governments at every level, civil society, the private sector, and faith-based organisations, according to the statement of the conference.

The year 2017 is expected to be the hottest year in non-El-Niño years, as concentrations of carbon dioxide in the atmosphere surged at a record-breaking speed in 2016 to the highest level in 800,000 years, according to a new report by the World Meteorological Organisation.

The abrupt changes in the atmosphere witnessed in the past 70 years are without precedent.

Espinosa underlined that immediate progress was urgent. “We need to move forward to fulfil the commitments that are due in 2020. In this regard, finance and pledges to cut greenhouse gas emissions are key,” she said.

Fiji is the first small island to chair the conference, and it is one of the most vulnerable countries for climate change.

At the end of 2015, in the Paris Climate Change Agreement, countries committed to decreasing the emissions of gases that cause global warming.

Schellnhuber: ‘Scientists have to take to the streets’ to counter climate denial