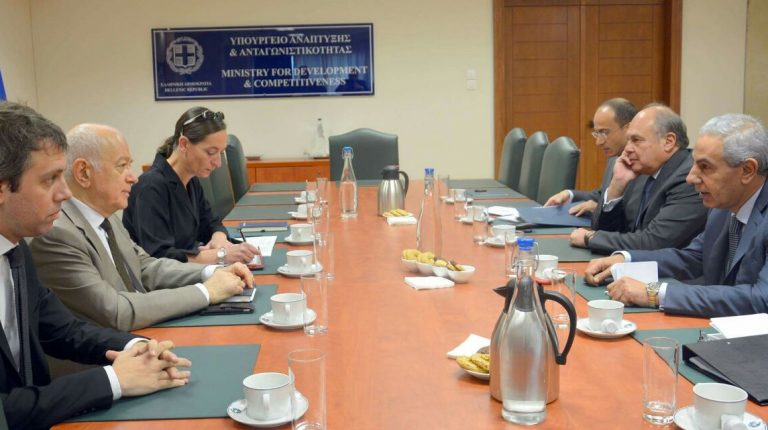 The Egyptian Ministry of Trade and Industry and the Greek Economy and Development Ministry have agreed to set up a new mechanism to enhance and develop cooperation between the two countries in order to facilitate bilateral trade between both countries over the upcoming period.

Egyptian Minister of Trade and Industry Tarek Kabil said that a joint work group of the two sides will be formed in order to follow up on the implementation of the development of the joint economic relations. The work of the group will start by arranging visits by the Greek business community to Egypt in order to create familiarity with the most important available investment opportunities and establish partnerships between both sides.

This came during the discussion session held by the Kabil with Greece’s Economy and Development Minister Dimitri B. Papadimirious as part of a sequence of meetings held on the sidelines of Kabil’s visit to the Greek capital, Athens, in order to take part in the Arab European Summit on behalf of the Egyptian president. The meeting was also attended by the Egyptian ambassador in Greece, Farid Mounib, and the commercial advisor, Manal Abdel Tawab, head of the commercial bureau in Athens.

He explained that Egypt and Greece are facing unprecedented development and recovery challenges, noting that the determination to adopt drastic economic reform programmes reflects the abilities of the two countries to overcome all the challenges and difficulties standing in the way of growth.

He pointed out the importance of activating the role of the Joint Business Council to activate and push trade and investment between the two countries, especially after the ministry launched the first investment map for the industrial sector, which helps investors become familiar with the real feasible investment opportunities in the field of industry.

Total Greek investment projects in Egypt, according to Kabil, are worth nearly $155m. There are nearly 160 projects in the fields of industry, services, tourism, financing, communications, information technology, and agriculture.

Kabil added that the meeting also addressed the readiness of Greek companies to cooperate with their Egyptian counterparts in terms of transferring expertise and technology, which some Greek industries have, such as the food industry and fish farms, in addition to new and renewable energy. He pointed out that it is important to find a work alliance between Egyptian and Greek companies, especially in the field of construction, transportation, tourism, and banks, in areas such as the Balkans, given that Greece is the doorway to these countries and Egypt is Greece’s doorway to African countries.

In this regard, Kabil pointed out that there are many Greek companies that have expressed their desire to transfer their activities to the Egyptian markets—a matter greatly supported by the Greek government.

Papadimirious noted that his country welcomes increasing Egyptian investment opportunities in the Greek market and entering into partnerships. He added that the Greek government encourages the private sector to inject new investments into many development sectors using the system of public-private partnerships.

Topics: Egypt Greece The Egyptian Ministry of Trade and Industry the Greek Economy and Development Ministry

Trade exchange volume between Egypt, Greece increases by 2.8% in first 9 months of 2017: Kabil