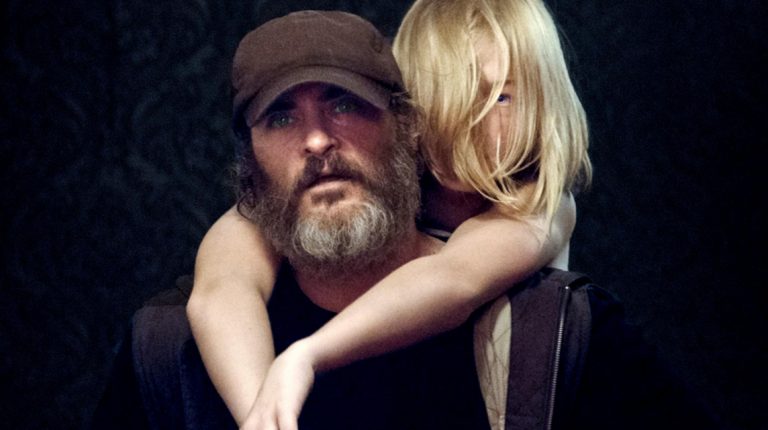 “You Were Never Really Here” premiered at the 2017 Cannes Film Festival on the last day of the main competition. Critics and film professionals were shocked, or at least did not expect such roughness from Lynne Ramsay, who unlike many other directors, has tensed up the performance and the edge of her films, following a period of inactivity.

As her fourth feature, the hitman thriller is a fast-paced, but kindred cinematic spirit, where the director follows a hired-muscle, or enforcer named Joe (played by Joaquin Phoenix), who takes hit jobs at times, and tries to end his life at others.

Phoenix’s performance as an actor translates modern frustrations of a man, a New-Yorker, who lives with his sick mother. His violent assignments do not prevent him from returning home to clean and prepare food for his mother.

The film goes back and forth, as the plot escalates, to drream-like sequences, showing us who this character is that we are seeing. Joe is a loner hitman with a beefy, grizzly body, who clearly has a history of abuse, as does his mother. In these dream sequences, we see him hiding, and his mother confronting his abusive father. The way Ramsay shifts between the violent scenes when Joe is on a job and cuts back to an abuse scene reveals a lot about the character. We are also briefly introduced to another chapter of Joe’s history, when he served in the military (possibly in Iraq), and worked with the FBI on human trafficking cases. In one of those choking scenes, we see him on a case that left a pile of dead Asians in a truck.

The combination of being abused as a child and working in law enforcement blends an interesting combination. Joe takes a job to rescue a politician’s daughter, and falls into a snake’s pit, finding himself in the midst of a major human trafficking organisation. After being hired by a senator to rescue his pre-teen kidnapped daughter, Nina (played by Ekaterina Samsonov), Joe finds himself entangled in bringing justice by freeing her from a sex slavery-facilitating organisation.

Comparison here might be helpful. “You Were Never Really Here” is not your mundane post-traumatic child abuse film, nor it is a film about a war veteran coming home disturbed and violent, and portrayed as a patriotic hero. It is the modern character of Travis Bickle in “Taxi Driver”, where his desires push him to “clean the filth for good.”

Ramsay shies away from films showing hitmen as emotionless hard-hitting creatures, but gives them a platform to dig deep into their psychological past. The bold piece of storytelling is a well entangled, hellish, and violent script. Joe is not Liam Neeson in “Taken”; he prefers the simplest weapon to inflict some serious damage on his enemies.