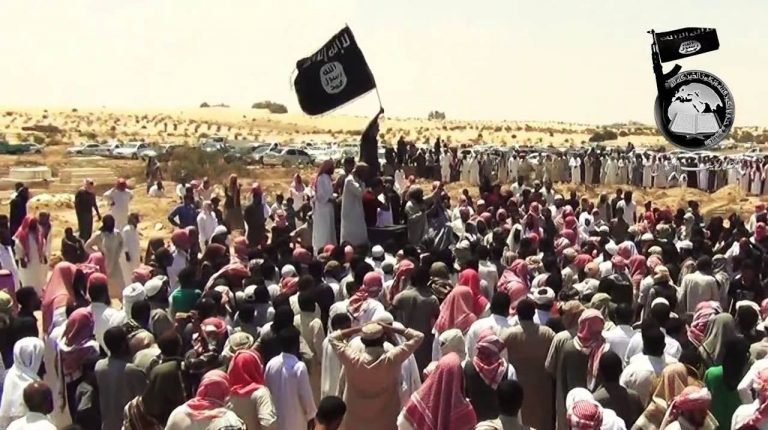 The map of militant groups in Sinai and the unity of Jihadist movements might change after the little-known Al-Qaeda militant group named Jund al-Islam announced it attacked the ISIS affiliated Sinai Province. After four years of fighting with the Egyptian state, Sinai Province has made another enemy, which joins lines of different enemies to the group, such as narcotics dealers, traffickers, tribe militiamen, and police and army forces.  The re-emergence of Jund al-Islam may mean a potential comeback of a new contender to Sinai Province, and hence a strong contender to ISIS in the region.

During the voice statement that was published on Jihadist forums, the group described Sinai Province as “Kharijites”, or apostates, who kill civilians and excommunicate them. Security sources told Daily News Egypt that Jund al-Islam targeted a truck that was carrying members of Sinai Province. The source added that the group relies of the literature and teachings of Al-Qaeda group, which prefers to stay in alliance with the local community it performs in.

He added that the group’s weaponry includes some heavy and advanced arms, most of which were stolen from police and security facilities in 2011. They also, as other Al-Qaeda affiliated groups, are professionals in using car bombs.

Media reports and statements on Jihadist-affiliated media outlets, says that the group became active or started its activities before 2011. They are known for considering the Egyptian security apparatus as “traitors, as they are cooperating with the Jews.”

In September 11, 2013, the group executed an attack using suicide car bombs to kill six people and wound dozens other, when they attacked a building of the army’s intelligence department in Rafah. The attack took part after the dispersal of the pro-Mohamed Morsi sit-in in the Rabaa square on 16 August, a day after the dispersal.

The statement justified the attack saying that ISIS are “Kharijites of Abu Bakr Aa-Baghdadi”, who is the leader of ISIS, which Sinai Province pledged allegiance to in 2014. Kharijites is a term used by Islamic scholars to describe groups who go against religious leaders or traditional religious institutions. The term originated in the 8th century in Arabia, when it was used to refer to Muslims who rejected Ali Ibn Abi Taleb to be the caliph. Militant groups often accuse each other with the term to undermine and criticise one another.

Since the rise of ISIS in 2013, it has been in competition with Al-Qaeda, but after several disputes in Sinai, the most prominent group in Sinai, Ansar Bayt Al-Maqdis, has chosen ISIS, which marked a victory for Abu Bakr Al-Baghdadi, whose troops have made several victories in Syria and Iraq in 2014. The result of the Sinai division lead to the rise of the militant group Ansar Al-Islam, which early this month claimed  responsibility for the Wahat shootout on 20 October. The group is led by Hesham Al-Ashmawy, a former military officer in the Egyptian army who joined Jihadist circles.

Al-Ashmawy was part of the Islamic State group but later joined Al-Qaeda. The jihadist cell is reportedly small, but with their knowledge of the Arab world’s largest military, they are considered to pose a serious security threat. Al-Ashmawy is suspected to have been behind several high-profile attacks on the Egyptian state, including a massacre of military personnel in Sinai, known as the Al-Farafra attack in 2014.

Some speculations also argue that Al-Ashmawy masterminded the assassination of Prosecutor-General Hisham Barakat in a Cairo explosion late last month, the first of its kind of a top state official since 1990. However, more than a dozen defendants were tried and were sentenced to death for this incident, with Al-Ashmawy not mentioned in the case. Al-Ashmawy has been accused of executing the Al-Farafra attack and is currently being tried in absentia.

Sinai has become the scene of frequent clashes between militants and state security forces, and intensified counter-insurgency operations were launched to curb militancy inside Sinai. These operations have imposed a state of emergency in the northern regions of the peninsula.

Over the course of the last four years, the Egyptian Armed Forces launched counterattacks against militant stationing points across the Sinai Peninsula, where the group is based, particularly in the cities of Sheikh Zuweid, Rafah, and Al-Arish.