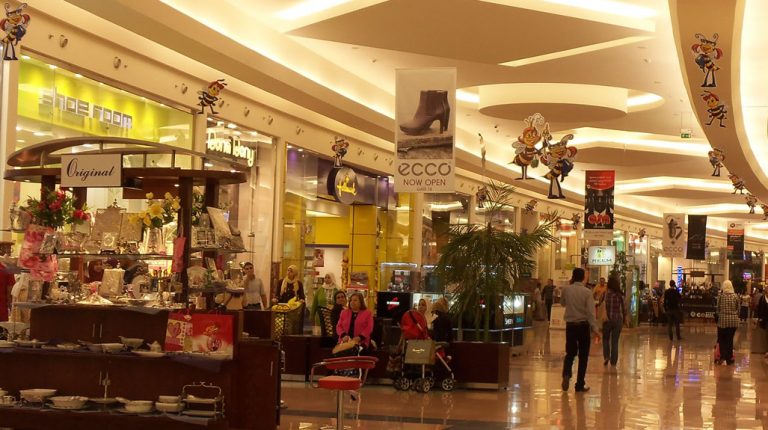 For decades, many have always wandered around the clothes stands and used garments shops in Cairo’s low-class neighbourhood, Wikalet El Balah. The market has long offered cheap options for families to buy Eid clothing and heavier outfits for the winter season. This year, however, the scene has changed; the roamers of the narrow alleys are different. The customers are no longer from low-class societies, but, walking around, one can spot shoppers coming from more affluent corners of the city.

In the wake of the Egyptian pound’s flotation, prices of all imported goods soared. For those who used to shop at Zara and H&M, buying garments seasonally became unfeasible. Instead, they joined the less-fortunate classes in looking for high quality wears at lower prices – something that can be found on the streets of Wikalet El-Balah, as well as other public areas.

Historically, the Wikalet El-Balah area, that is located near the Nile Corniche, was mainly selling scraps to citizens, but later came to offer a wide variety of clothing at the lowest possible prices, for males, females, and children.

It is known that winter clothing is the most expensive, for which the one should devote a large budget to be able to purchase clothes for the season. In any other season of the year, people in Egypt can wear any clothes, but winter is the only season that requires specific type of clothes that are made of heavy materials and fabrics with prices always on rise.

Offering high budgets for every family member to buy winter clothes has become difficult as the recent inflation of prices has caused families to cut their expenses to be able to save money for emergencies and other life requirements.

Currently, prices of clothes in local and high-end shops have become higher than any previous time in Egypt. To buy a jacket, boots, pullover, coat, or even a scarf, on average, one needs over EGP 3,000 to able to cover all their winter clothing needs.

Despite this, citizens of the middle and upper-middle classes have taken to Wikalet El-Balah, and other popular areas, to be the spots where they can find their winter clothes with prices lower than those presented at high-end shops, as prices of those places have also increased.

Other areas where people can find clothes at cheaper prices, as they target people from low classes, include Al-Arish and Deyaa streets in Al-Haram area, Roxy district in Heliopolis, and downtown Cairo.

With the constancy of salaries amid high prices, handling winter clothes is not an easy thing, leading people to sell their old clothes in public markets and through social media platforms, in order to get extra money for buying new ones. Apparently, they don’t actually buy new clothes, as they also head to the same places where they sold their clothes to buy other pieces, even if used.

A political science graduate who spoke to Daily News Egypt on condition of anonymity, said, “clothes available at local markets are presented with low quality and very high prices, which I don’t prefer or like. This year, I was able to travel abroad to European countries, so I took it as a chance to buy clothes from their local shops. The prices were reasonable. However I didn’t buy a large quantity, but enough for this winter and the upcoming one also.”

The 26 year-old man, characterised from upper-middle class said that he is not the type of person who shops on a regular basis, and goes shopping only when he is in need.

Another upper-middle class citizen, Nada Tantawy, 25, told Daily News Egypt, that she is the type of person who used to regularly buy clothes every month, always aware of offers and sales seasons, saying “luckily, I was able to buy a large quantity of clothes throughout the years that came before the flotation”.

“If I have EGP 1000, I will not buy a coat or a jacket. I will buy something else, like any another two winter pieces, that I can wear with my own jackets and coats,” the married women said, referencing that EGP 1,000 currently could not get her more than one or two pieces from high-end brands.

Tantawy added that for her personally, she is not impacted, but when it comes to buying clothes for her six month-old baby, the issue is hard, as prices of kids clothes are much more expensive than those of adults and teenagers.

“I need a budget of EGP 3,000 to buy winter pyjamas and jackets for my baby, but my husband’s income is not enough to afford this,” she explained.

When asked if she would go for tailors or lower-class popular shops, Tantawy said that she is still not sure about doing this, but she is always hearing from her upper-middle class friends about online shopping and Wikalet El-Balah stands.

“We have been a family of the upper-middle class all my life. However, sustaining [our living standard] after flotation is really difficult. We used to have a budget for winter cloths and it usually would get me, like, several hoodies, jeans, and even boots from high-end brands. Now, this budget can barely get me a two pieces from the same shops,” said the mass communications graduate.

She continued saying, “last year, we went to local shops as an alternative where they sell good quality [clothes] for lower prices. But even these places have become extremely expensive. I need a budget that is above EGP 5,000 more than my old one in order to get the same quality from the same old places.”

Amira Abdel Latif rhetorically asked Daily News Egypt, “why should I go for a shop where one coat costs EGP 1,000, when I can go to local areas and buy three jackets with the same amount.”

The 25 year-old Abdel Latif said the clothes at high-end brand shops have become very expensive and are of weak materials and poor quality. “I didn’t expect anytime in my life that I would go to area like Wikalet El-Balah, but now I was forced to do so. Prices are really unfair.”

Brides-to-be are at the top of people struggling with new prices of winter clothes. An old tradition, Egyptian females buy a whole new collection of clothes when getting married, leaving behind their old clothes at their parents’ house, but now the situation has changed considerably.

“As a bride-to-be, I will definitely take my current clothes with me and I will just get a few new outfits and items that I can wear with my old ones,” said Raghda Sayed.

Sayed’s statement hence indicated that when getting married, winter clothes are no longer seen as essential, as she can compromise on buying new clothes, since marriage already costs people a lot of money, therefore one should cut expenses on certain things, to save money for other main event.

Regarding prices hikes, she added, “before, it was normal. I used to buy winter clothes, new collections, from high-end clothing brands, but now I am no longer shopping for new collections or even high-end brands. I either buy from abroad or not at all,  or wait for seasonal sales to shop.”

Fatma Abuelkhair, a newly married woman, said that she was lucky to have been able to buy a good number of jackets and coats while buying things for her marriage. “I bought them in sales seasons, a few months right before the flotation. I was also keen to buy them in bigger sizes, to fit me after pregnancy.”

Buying clothes from shops abroad is definitely an alternative option for people, though the conversion of currencies with the reduction of the Egyptian pound’s value is an obstacle.

Meanwhile, upper-middle and middle class citizens’ increased reliance on lower-class shops and stands has led their previous main customers to complain that the richer people’s entrance into their markets has made prices unaffordable for all.

Yasser Yassin, a father of three children, living in Imbaba district, told Daily News Egypt that he believes that the vendors at Wikalet El-Balah have increased the prices by as much as double, as they became aware that they have “more classy” customers.

Meanwhile, a 40-year-old female, who spoke on condition of anonymity, did not agree with Yassin, saying that vendors are very clever, and so can identify the rich and poor customers, and accordingly offer different prices for each.

Vendors owning different clothes stand do not have unified prices for the clothing items. Pricing is random, depending on the look of the client and the way he or she is speaking. The clothes presented on these stands are either brought in bulk from factories, are used, or smuggled.

While prices of winter clothes is a problem, people were able to come up with ideas benefiting themselves, and others too. On Facebook and Instagram, pages and groups to sell and buy old clothes, as well as hand made clothes are on the rise. These groups and pages were met with high interaction from users, through joining and inviting family and friends. In addition to this, the price hike of winter clothes motivated people to donate more clothes, understanding that certainly the situation of neediest people is worse than their own amid the inflation.

“I search for coat designs online, I select the design, I tailor it myself. It only cost me [EGP] 300 or 400 instead of buying one from shops for over EGP 1,000”, Hend Hussien told Daily News Egypt.

Hussien goes to Ghoria district, where various materials, including, heavy fabrics are available in high quantities at reasonable prices.  She said that she is preparing to create a page to sell coats made by her at affordable prices.

Specifically, over the past two years, whether for winter, summer, or evening clothes, many girls have resorted to tailoring. Also, in Wekalat El-Balah, there are a number of shops selling plain or colourful fabrics of different materials. Females go to these shops to buy whatever fabrics they want, and go to their own tailor to make designs at half the price compared with prices of high-end brand shops. To do this, they prefer to deal with tailors of poorer areas, as their prices are cheaper than the ones present in their more affluent areas.

Inflation led rich people to opt more for outlet shops and malls, and to depend on places of the less-fortunate that they never expected to venture into. The situation is raising questions on how much worse it will be for both low and high social class citizens if prices continue to rise during the upcoming years.