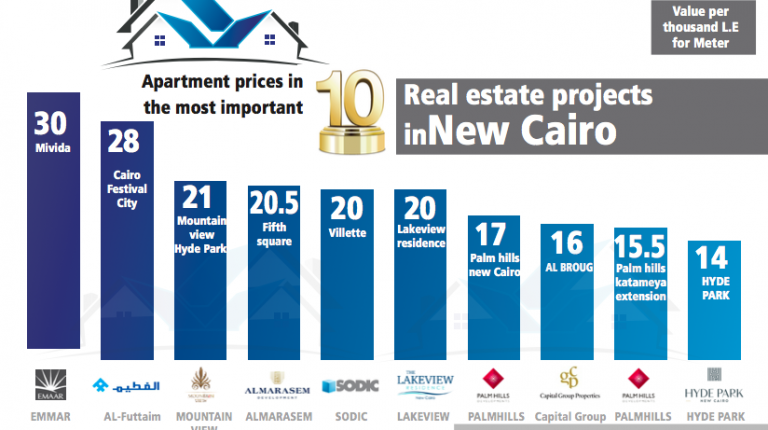 Seventeen years ago, the Ministry of Housing issued Decree No. 191 for the year 2000 to establish New Cairo city in the desert, at the time without utilities, services, or a population.

The head of New Cairo once said that the city used to have only one inhabitant living in a villa, adding that there was only one gas station and a bakery.

The city was built on an area of 70,000 feddans east of Cairo, and only 5 kilometres away from Nasr City.

Daily News Egypt will shed light on the housing unit prices in the top 10 residential real estate projects in New Cairo, according to the research and development section in the Business to Business for Investment and Real Estate Marketing.

Mivida real estate project, developed by Emaar Misr, is one of the most expensive residential complexes in New Cairo, where prices range from EGP 26,000 to 30,000 per sqm for apartments, duplexes, and penthouses with areas ranging from 190 to 290 sqm.

Meanwhile, the prices of villas, twin houses, and town houses ranged between EGP 7.3m and 22.5m with areas ranging from 280 to 500 sqm.

The project will be completed within four years, from the signing of the contract. The customer pays 5% of the unit’s price in advance, 10% when signing the contract and the rest over six years, in addition to maintenance expenses.

The project also includes small residential units with smart designs at competitive prices and ready for furnishing, along with commercial areas with integrated facilities, such as health care centres, schools, retail outlets, and hotels, as well as a central park with an area of more than 30 feddans.

The prices of Cairo Festival City’s residential units are EGP 28,000 per sqm for apartments and duplexes, with areas ranging between 144 and 267 sqm.

The units will be completed within three years. The booking fees amounted to 10% of the unit’s price, while the customer pays 15% of the price when signing the contract and 10% when receiving the unit. The rest of the price would be paid in installments over five years, in addition to maintenance expenses.

The commercial area of the shopping centre is estimated at 160,000 sqm. It has the first branch of the Swedish furniture chain IKEA in Egypt, built on an area of 33,000 sqm, in addition to an 11,000 sqm Carrefour hypermarket, a cinema complex, recreational areas, commercial stores, and a parking lot with a capacity for 7,000 cars.

The residential area exceeds 1m sqm. The total area of administrative offices is 286,000 sqm, while the hotels were built on an area of 41,600 sqm. The project is located on 90th Street in the Fifth Settlement, near the ring road.

According to Al-Futtaim officials, the Cairo Festival City project expects investments of more than EGP 21bn, but this value was estimated before the flotation of the exchange rate in November 2016.

Mountain View, a real estate investment company, has developed the Mountain View Hyde Park project on an area of 200 feddans in New Cairo.

The price of residential units at Mountain View Hyde Park reached EGP 21,000 per sqm for apartments, penthouses, and villas, with areas ranging between 166 and 278 sqm.

The project is scheduled to be completed in 2021. Customers can pay through different plans: they can pay 10% of the unit’s price as a deposit, with the rest being paid in installments over four years, 20% and the rest paid over five years, or 30% deposit and the rest over six years, in addition to maintenance expenses.

The project is part of Hyde Park’s total area, amounting to 6m sqm.

Hyde Park has agreed with Mountain View and Al Ahly for Real Estate Development to allocate 200 feddans for the establishment of a 5,000-unit residential area and another 2,500-unit project.

The alliance between Mountain View and Saudi Arabia’s Sisban Holding Company has started the development of the “I City’ project in New Cairo, on an area of 500 feddans, in cooperation with the New Urban Communities Authority (NUCA), with investments of $3.6bn.

The project is planned to include 18,000 housing units, of which 60% are owned by the Mountain View-Sisban alliance, and 40% by the NUCA.

I City’s units include apartments, town houses, and villas, on areas of 100-600 sqm.

The prices of villas, twin houses, and town houses ranged from EGP 6.9m-14m, with areas ranging between 249 and 369 sqm.

The project is expected to be completed within 42 months since the signing of the contract. The project offered two payment systems: the customer can pay 5% of the contract as a deposit and the rest would be paid over six years, or can pay 10% in advance and another 10% when signing the contract, in addition to maintenance expenses.

The company recently opened the door for booking the project’s units. It is located on 90th Street in the Fifth Settlement. The project includes a commercial mall and two health clubs, one for apartments and the other for villas.

Marasem owns two plots of land with an area of 118 and 40 feddans in New Cairo.

The Villette project is located on an area of 301 feddans and was developed by the SOREL company affiliated to the Sixth of October Development and Investment Company (SODIC).

The project consists of villas, duplexes, and penthouses with areas ranging between 127 and 320 sqm. The units’ prices range between EGP 18,000 and 20,000 per sqm. The customer should pay 10% of his unit’s price as a deposit and the rest can be paid in installments over seven years.

The prices of twin houses and town houses in the project range between EGP 7,100 and 9,970 per sqm, with areas ranging between 260 and 313 sqm. The customer should pay 10% of the unit’s price in advance and the rest would be paid in installments over five or six years.

The project includes a club built on an area of 30 feddans and various commercial and service areas.

The project is located near 90th Street in New Cairo, close to the American University campus.

SODIC launched the first phase of the project in December 2014, just six months after the company acquired the land proposed by the NUCA, with an area of 301 feddans.

The project was developed by the Lake View Residence for Urban Development company, on an area of 77.3 feddans, in the East Lotus area of New Cairo.

The project includes apartments and penthouses with areas ranging between 128 and 272 sqm, in addition to service, commercial, and entertainment areas.

In August, the Ministry of Housing and Urban Communities issued Decree No. 600 for the year 2017 approving the amendment of the Lake View Residence project, East Lotus in New Cairo city to establish an integrated residential project.

Lake View Residence received the land in mid-2014 and a ministerial decree was issued in November 2015 to start the development of the project, before applying the amendments this year.

Palm Hills Development Company has developed the Palm Hills on an area of 500 feddans in partnership with the NUCA.

The Palm Hills project consists of apartments with spaces ranging between 142 and 250 sqm, at a price of EGP 17,000 per sqm. The customer should pay 10% of the unit’s price as a deposit and 5% when receiving the unit, and the rest would be paid over seven years.

The villas and twin houses were built on areas of 295-610 sqm, at prices ranging between EGP 7.8m and 20m. The customer would pay 10% in advance, 5% when contracting, and the rest would be paid in installments over seven years, in addition to maintenance expenses.

The first phase of the project was up for sale in November 2016 and is scheduled to be delivered in December 2021.

Under the partnership agreement with the NUCA, Palm Hills will undertake all financing, construction, development, internal infrastructure, marketing, and sales, while the authority will provide the land as well as facilities and external infrastructure for the project.

The NUCA would receive 42% of the project’s revenues, in exchange for the value of the land that costs EGP 10bn.

The project is located 7 kilometres away from the Palm Hills Katameya project, and 15 kilometres from the American University in Cairo.

Capital Group Properties (CGP) won the establishment of the Alburouj project with investments of EGP 40bn, on an area of 1,212 feddans between Suez and Ismailia next to the Future City.

The customer would pay 5% of the unit’s value, 5% when signing the contract, 10% upon delivery, and the rest would be paid over eight years, in addition to maintenance expenses.

Alborouj is the first investment project implemented by CGP in Egypt. It includes about 28,000 residential units, as well as various commercial, administrative, leisure areas, and other activities, with an area of almost 5m sqm.

According to Capital Group officials, Alborouj offers 50,000 direct and indirect jobs, all of which are occupied by Egyptians. The company relies on Egyptian contracting companies with experience in similar projects.

The ownership of Capital Group is divided equally between Abu Dhabi Capital Group and Al Ain, while the parent company has implemented several projects in a number of countries around the world.

The project is located on an area of 434,000 sqm in New Cairo. According to the Palm

Hills Development Company, the project will include 441 housing units with total areas of 172,000 sqm.

The units’ spaces range from 285-410 sqm. Customers would pay 10% in advance, 5% when contracting, and the rest would be paid in installments over six years, in addition to maintenance expenses

The total area of the projects developed by Palm Hills in East Cairo reached 4.4m sqm, ranging EGP 90 and 800 per sqm.

Hyde Park is one of the largest real estate investments in New Cairo, with an area of 1,400 feddans.

Hyde Park includes a variety of units, including apartments, duplexes, and penthouses, with areas ranging from 145 and 274 sqm, at a price of 14,000 per sqm.

Customers should pay 10% of the value of the unit as a deposit, 10% when signing the contract, 10% upon delivery, and the rest will be paid over seven years, in addition to maintenance expenses.

Hyde Park Properties for Development was established in 2007 under the name “Damac Properties Development Company”. In 2009, the Housing and Development Bank, the Egyptian Arab Land Bank, and the Construction Products Holding Company for Investment acquired 60% of the company’s shares.

In May 2013, the NUCA replaced the strategic partner, Damac Emirates Group. Hyde Park is located on 90th Street in the Fifth Settlement area of New Cairo and overlooks the ring road.

SODIC targets EGP 8.7bn of contracted sales in 2018 as it mulls expansion