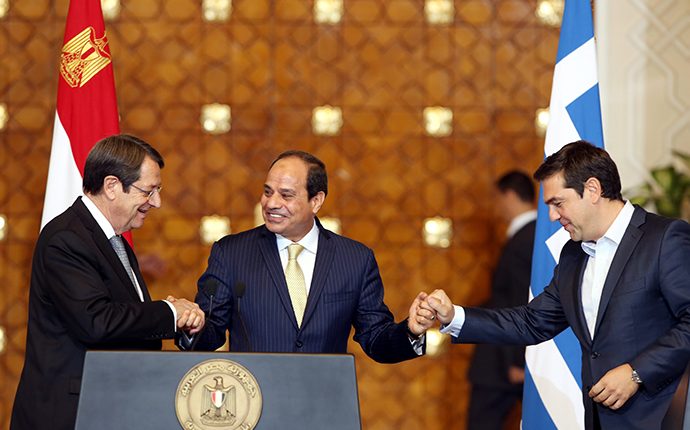 President Abdel Fattah Al-Sisi headed to Cyprus today to attend the fifth tripartite summit between the two states and Greece.

Upon arrival, Al-Sisi will attend a bilateral meeting with President Nicos Anastasiades to evaluate and promote bilateral cooperation in existing and new areas and to discuss regional cooperation to enhance peace and stability in the eastern Mediterranean.

As Cypriot authorities began preparations for receiving the two countries’ leaders, President Anastasidis said, “Cyprus has always been very supportive of the position of Egypt in maintaining stability and for being an important partner to the European Union. Cyprus is always a partner on which Egypt can rely.”
Egypt has strong ties with Greece and Cyprus. The Egyptian president visited Greece in December 2015 in a three-day visit, during which he discussed with his Greek counterpart boosting bilateral relations and enhancing economic ties between the two countries.

The summit also included discussions on the migration crisis and the constant flow of refugees from countries across the region.

They also discussed the situation in the eastern Mediterranean and means of cooperation in tackling terrorism and its threats, as well as discussing the issues related to the cooperation of the two countries in the fields of maritime security and energy.