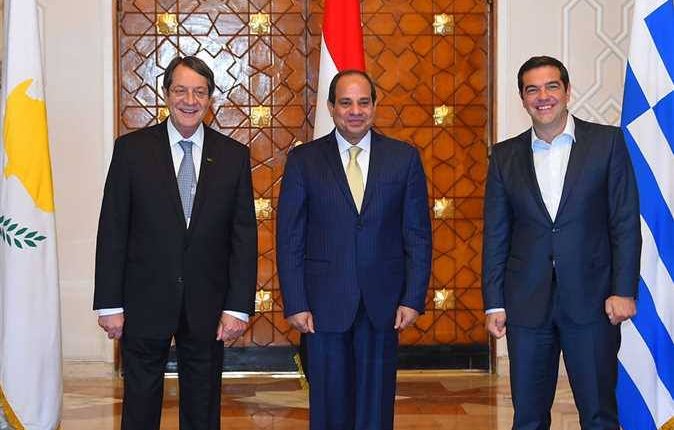 Al-Sisi has arrived to Nicosia on Monday morning in a two-day visit to take part in the 5th tripartite summit with his Greek and Cypriot counterparts.

During a press conference following his meeting with the Cypriot president, Al-Sisi said that they discussed several issues including boosting economic relations. He added that holding the Egyptian-Cypriot entrepreneurs forum on the sidelines of his [Sisi’s] visit will help in boosting communications between businessmen in the two countries.

The president expressed hope that the gas and oil discoveries to help in reaching stability and peace in the Eastern Mediterranean region. He added that those discoveries would provide Europe with its demand to reach the energy security, in light of the strategic location of Egypt and Cyprus which enables them to play a vital role in energy policies in the region.

“I assert Egypt’s stance in supporting Cyprus’s right in exploiting its natural wealth in its own economic zone, in accordance with the maritime international law, and agreements with neighbouring countries including Egypt,” Al-Sisi said.

Lately, Egypt has headed toward strong ties with Greece and Cyprus. Al-Sisi visited Greece in December 2015 in a three-day visit during which Al-Sisi discussed with his Greek counterpart boosting bilateral relations and enhancing economic ties between the two countries.

In October 2016, the fourth round of the trilateral summit between Egypt, Cyprus, and Greece was held in Cairo. As a result of the summit, the three countries agreed to work on the implementation of projects in the fields of energy, maritime transport, tourism, and agriculture.

The summit also included discussions on the illegal immigration crisis and the constant flow of refugees streaming from crises across the region.