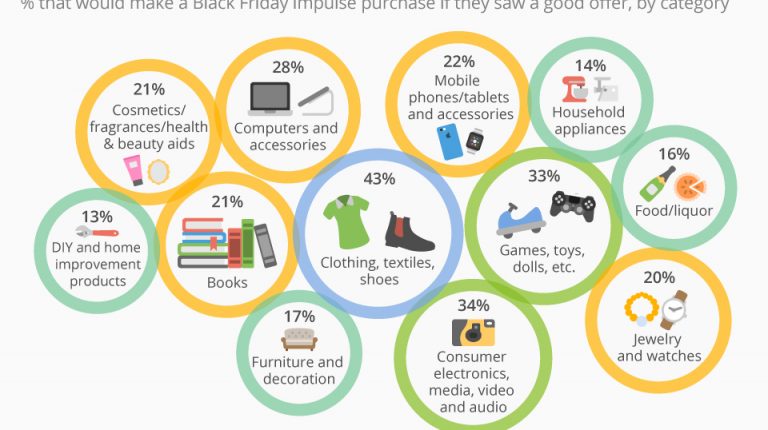 Black Friday, which is the day immediately following Thanksgiving in the United States, has become synonymous with rampant shopping, becoming an essential part of media, economic, and cultural calendars. Although there is a cultural basis for Black Friday in the United States, the concept has been embraced globally, especially after the rise of e-commerce over the last few years, and has become common for stores in Canada, Britain, Egypt, and the UAE to run Black Friday promotions.

This year, Black Friday will take place on 24 November, which is also considered the start of the holiday shopping season. The average American household is expected to spend around $936 in the 2017 holiday season, according to the founder and president of Brand Keys, Robert Passikoff, as reported by NBC.

Moreover, the United States National Retail Federation(NRF) forecast that the average spending per household will be $967 and that the total spending will be an estimated $682bn, increasing by around 4% from $655.8bn in 2016.

It is estimated that about 69% of Americans, or about 164 million people, plan to shop or consider shopping over the holiday weekend that begins Thanksgiving day and stretches out until Cyber Monday (27 November this year), as reported by the Financial Times.

On the other hand, British shoppers are expected to spend £10.1bn in the week of Black Friday, nearly 4% higher than last year, as more retailers take part in the promotional day. Yet, most of the activity is expected to be online, according to the Guardian.

The United Kingdom’s Interactive Media in Retail Group (IMRG), and the courier’s insurance firm Staveley Head, forecast that £1.74m will be spent every minute online in the UK on Black Friday, with £700m spent before 9 a.m., the Guardian reports.

Moving to Egypt, the country suffering from soaring inflation that greatly affected retail sector sales, Jumia – the first online retailer in Egypt – announced that the initial indicators for their website’s Black Friday offers are positive and could reach EGP 18m by the end of the campaign, indicating that the total number of visitors awaiting the campaign could reach 50,000 per second, Daily News Egypt learned.

More than 1.5 million visits to their website were reported, during the first hour of the campaign alone, and sales in the first five minutes were equal to the entirety of sales made during the campaign in 2014.

On the other hand, Souq.com the major online retail store in Egypt and the UAE – which was recently acquired by Amazon.com Inc. – has announced the return of its biggest online shopping event, the annual ‘White Friday Sale’, with 500,000 deals, claiming that they will offer deals of up to 70% off in all product categories on their website, Al-Arabiya reported.

While AWOK.com, one of the Middle East’s largest e-commerce businesses, operating in the UAE, announced that they will be offering discounts of up to 90% during Black Friday.

In Canada, that countries’ residents are estimated to spend on average around $1,400 per person, $654 of which will be dedicated only to gifts, according to a survey by savings website RetailMeNot.ca.