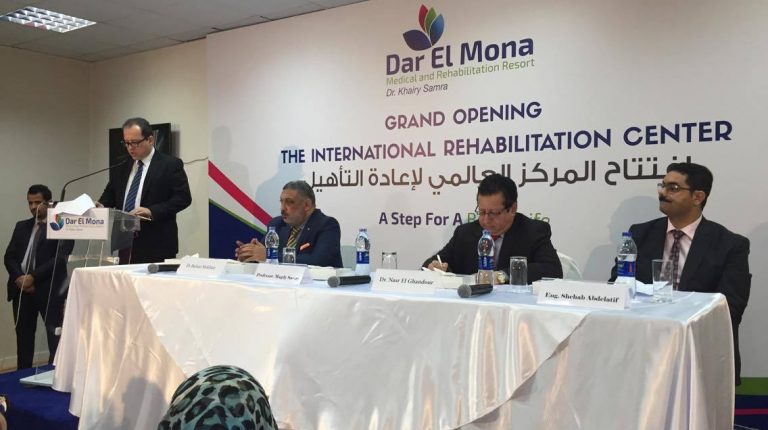 Dar el-Mona resort for medical and physical rehabilitation has kicked off its partner project, the International Rehabilitation Center “IRC”, on Sunday, with joint Egyptian-Saudi investments worth more than €2 mn.

The IRC is the first centre in Egypt and the Middle East to provide the latest state of the art equipment for rehabilitation under one roof. It is also considered as a new addition to Egypt’s growing medical tourism map, according to a statement issued by the centre.

“The IRC is comparable to a quantum leap in the field of comprehensive rehabilitation therapy aiming to uplift this sector of medicine in Egypt and the Arab world by applying the latest medical practices to achieve the highest cure rates as quickly as possible,” Magdy K. Samra, CEO of Dar el-Mona for Rehabilitation, said during the press conference.

Samra added that the centre is equipped to serve patients of Neuro, Orthopedics, geriatrics, cancer as well as paediatrics patients who have special care requirements using the latest equipments and techniques with a fraction of the cost compared to similar centres in the west.

According to Samra, Dar el-Mona applies a wholistic approach to rehabilitation, organising individualised programs in accordance with the patients’ actual needs to help him/her achieve their full potential. The centre also offers various rehabilitation services including physiotherapy, vocational rehabilitation, speech therapy, and psychological rehabilitation which is “deemed as an indispensable part of the program, all gathered under one roof.”

Samra expressed hope that Dar el-Mona would address the needs of Egyptian and Arab patients that used to travel for months and sometimes for years in order to be properly rehabilitated, with all the social and financial cost that comes with that.

“Now, all patient’s needs are here at home or nearby geographically and culturally within the confines of Dar el-Mona that provides a cosy atmosphere. For Europeans, they will find a comprehensive recreational and rehabilitation project with minimal cost in a country with ideal climate all year round,” said Samra.

Saudi investor Shehab Abdellatif, CEO of Plan Med for medical equipment, said that they chose Egypt to launch the IRC because it is one of the prime destinations for medical tourism in the MENA region and that they are aiming to transfer international technology to mix with Egyptian medical expertise that is renowned and trusted.

Abdellatif also added that Dar el-Mona in particular was chosen because it falls in line with Plan Med’s vision in developing rehabilitation treatment as they bring 25 years of experience in neuro rehabilitation to the table.

“Dar el-Mona is a resort that was designed to exist in a pollution free environment, overlooking the Giza pyramids, one of the most important world heritage sites, which helps to reinforce the concept of medical tourism.” said Abdellatif.

The percentage of disability in Egypt is 10,7 %, which means that more than 10 millions people with special needs exist, each of whom has a family of about four members. According to these numbers, half of the society is affected by disability, asserts Bahaa Mokhtar, deputy secretary general of the National Council for Disability Affairs plus a wide panel of prominent NGO’s concerned with challenging disability.

During the conference, Dar el-Mona honoured a number of champions who have undergone the rehabilitation program in the centre, including the Egyptian international diver Amr el-Sohagy who has taken on his own journey of rehabilitation through the centre and managed to make his comeback as an Egyptian champion and a role model for all people challenging disability.

El-Sohagy told Daily News Egypt that he has started his journey of rehabilitation at the centre since 2010. Over seven years of rehabilitation, el-Sohagy believes that he is now much better, he also achieved the first rank of paralympic swimming in Egypt, and the fourth in the world.