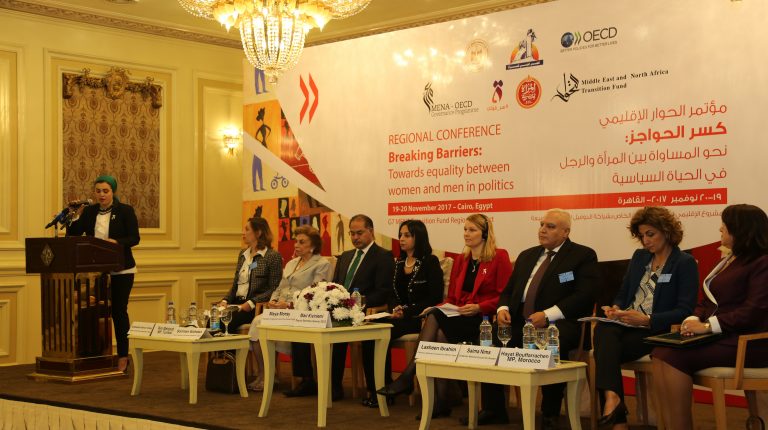 During a regional conference on women, Maya Morsi, head of Egypt’s National Council of Women (NCW), said that there are 14 women prime ministers across 109 countries, adding that the proportion of women’s participation in world parliaments is 24%.
Morsi pointed out the importance of supporting women in decision making positions.
The conference entitled “Breaking Barriers: Towards Equality Between Women and Men in Politics” was organised by the NCW in cooperation with the Organisation for Economic Cooperation and Development (OECD), and the Ministry of Investment and International Cooperation.
Furthermore, the NCW head said that women in Egypt have reached many positions including the president’s national security advisor, the governor, and deputy governor of the central bank.

During the conference, Morsi pointed out great achievements made during the year 2017, declared as the Year of the Egyptian Woman and coming as part of the newly released Egyptian Women Vision 2030: Women Empowerment Strategy, noting that the Council has already established an observatory to follow-up the implementation of the strategy based on clear standards.

“We hope women will represent 30% of parliament seats,” said Morsi.

In the same context, she added that she hopes women will secure 40% of the seats in local councils through the 25% quota assigned to them in addition to women’s quota under other categories.

We need to break barriers through changing the culture: ELTallawy

For her part, Mervat ElTallawy, director general of the Arab Women Organisation, stressed the importance of this conference and its theme, reviewing the situation of Arab women in parliament and ministerial posts.

In the same context, she said that women are represented in Mauritanian parliament by 25%, noting that in Algeria, the president of the State Council is a female.

Meanwhile, She pointed out that there is a sharp gap when it comes to the percentages of women in the judiciary among Arab countries, noting that, in Lebanon, women’s representation in the judiciary has reached 50%.

Finally, she stressed the need to break barriers through changing the culture and ending discrimination based on gender.

Reem Mahjoub, member of the Tunisian House of Representatives, said that women in Tunisia have made great strides towards real equality with men at the legislative level, pointing out that women`s labour rights in Tunisia are far better established than many countries in the region.

She added that, after the revolution in Tunisia, women fought to maintain their gains, which was clearly reflected in the 2014 Constitution, that made sure to protect the rights gained to-date for women.

Further more, “the key Law on the Elimination of Violence against Women issued by parliament is a revolutionary step in legislation and a response to the attempt to diminish women and ignore their role,” according to Mahjoub.

Salma Namis, secretary general of the NCW in Jordan, said that Jordan was affected by the change in the regional situation after 2011, where there was a need for political and legislative reform.

Moreover, she added that the electoral law and the ordinance of municipal councils have been amended, noting that the quota system has been applied in Jordan since 2005.

Also, she stressed that the electoral law increased the number of seats allocated to women in parliament to 15 seats.

Finally, she pointed out to annulling article 308 of the penal code prescribing for the rapist to marry the victim.

Hayat Bouffarrachen, member of the House of Representatives in Morocco,  said that Moroccan women’s participation in political life has been developing since the 1990s.

Further more, she stressed that the participation of Moroccan women in political life, particularly the parliament, is not only related to legal requirements, but also related to changing the mindsets of the people and introducing new ideas from the concepts of human rights.

Mari Kiviniemi, deputy secretary general of the OECD, told Daily News Egypt that the strategy for women’s empowerment by 2030 is a great initiative, noting that all stakeholders are needed in order to succeed.

Moreover, she stressed that, today, women are challenging the difficulties and problems as women in Jordan won an unprecedented 12% of seats at the local level.

She pointed out that Tunisia is a clear example of women’s ability to access appropriate positions in parliament.

Finally, she stressed the importance of parliamentarians’ role in the legislation on issues of domestic violence and the eliminating the legal conditions for racial segregation in Jordan.