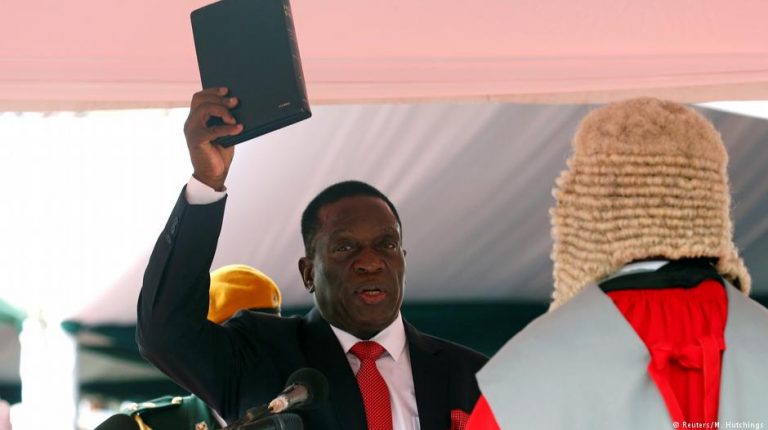 Former Vice President Emmerson Mnangagwa has been inaugurated as Zimbabwe’s new leader, taking over from his toppled predecessor Robert Mugabe. A large crowd gathered to witness an historic transition of power.Tens of thousands of people gathered at Zimbabwe’s National Sports Stadium, to see former Vice President Emmerson Mnangagwa swear his oath on Friday.

Mnangagwa, who was sacked from his role as Mugabe’s deputy earlier this month, is only the second president in Zimbabwe’s 37-year existence as an independent nation.

“I will be faithful to Zimbabwe and obey, uphold and defend the constitution and all other laws of Zimbabwe,” said Mnangagwa, as he took the oath of office before the country’s chief justice. Mnangagwa then received his chain and sash of office, before taking salutes and pledges of allegiance from military chiefs.

In his inaugural speech, Mnangagwa:

— praised Mugabe, declaring him “the only surviving, founding fathers of our nation.”

— said that Zimbabwean domestic politics has become “poisoned and polarized.”

— pledged to fight corruption. “Acts of corruption must stop forthwith. Where these occur, swift justice must be served,” said Mnangawa.

Mugabe, who ruled for the entire period since independence from white-minority rule in 1980, did not attend.

Read more: Emmerson Mnangagwa — The Crocodile who snapped back

Zimbabwe’s Herald newspaper on Friday said that, while speaking to Mugabe, Mnangagwa had agreed his former boss need not be present at the inauguration “given the hectic events of the past week-and-a-half.”

An important ‘no show’

Mugabe, who had been the world’s oldest head of state, resigned on Tuesday after the ruling ZANU-PF party sacked him as its leader and threatened to begin impeachment proceedings.

South African President Jacob Zuma, who would have represented southern Africa’s dominant regional player, was not due to attend because he was hosting a visit by Angola’s new head of state.

Morgan Tsvangirai, the leader of the main opposition Movement for Democratic Change (MDC), was among the dignitaries.

Mnangagwa served as a former justice and defense minister, and was in important Mugabe confidant for decades before the pair fell out because of the presidential ambitions of Mugabe’s wife, Grace. Mugabe sacked Mnangagwa from his vice presidential role in early November. Mnangagwa then fled to South Africa.

In his first speech since returning, Mnangagwa said he had fled the country because of threats to his life, as well as an attempted food poisoning in August. Mnangagwa said he was in constant contact with military leaders during his time in exile.

He also pledged “jobs, jobs” for Zimbabweans, who have seen their country’s economy collapse during Mugabe’s period in office.

Despite an overall message of inclusion while speaking in English, it was noted that Mnangagwa had switched to the local Shona language to condemn opponents of the party as being like “barking dogs.”

Mugabe is understood to have been given assurances that he will be immune from any future prosecution, as well as a guarantee of safety for his family, including wife Grace.