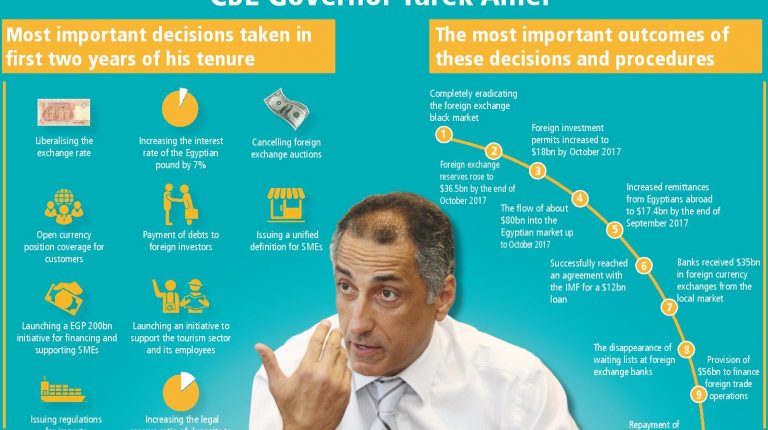 Monday 27 November 2017 marks the second anniversary of Tarek Amer assuming the position of governor of the Central Bank of Egypt (CBE).

During these two years, Amer took a range of decisions and actions – and launched a number of initiatives – that received strong support from the political leadership and played a major role in improving indicators of economic performance.

As a result of these decisions, procedures, and initiatives, Amer was declared the Best Arab Central Bank Governor in 2017 by the board of directors of the Union of Arab Banks, as well as the Best Central Bank Governor in the Middle East and North Africa by Global Markets newspaper, issued on the sidelines of the World Bank and the International Monetary Fund’s (IMF) annual meeting.

Amer previously served as the first deputy governor of the CBE between 2003 to 2008, during which he participated in the implementation and preparation of the programme to reform the banking sector and monetary policy. From 2008 to 2013, Amer served as chairperson of the National Bank of Egypt (NBE). During that period, he led a comprehensive reform of the bank that was praised by many financial institutions at the international and regional levels.

Amer previously worked at Bank of America and Citibank abroad, then returned to Cairo to take the position of vice president of Banque Misr before working at the CBE. He also served as chairperson of the Federation of Egyptian Banks.

Daily News Egypt looks at the most important decisions taken by Amer in the past two years, the impacts of those decisions on the economy, and the effects on the domestic market.