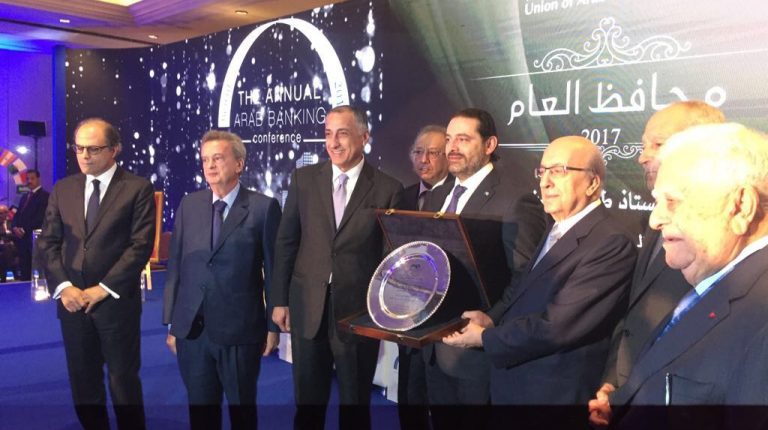 Lebanese Prime Minister Saad Al-Hariri presented an award recognising the best Arab central bank governor in 2017 to the Governor of the Central Bank of Egypt (CBE) Tarek Amer, having been selected by the Union of Arab Banks board of directors in recognition of his distinguished efforts in controlling monetary policy in Egypt.

Wissam Fattouh, secretary general of the Union of Arab Banks, said that the CBE governor is a pioneer in the Arab banking industry and one of the best experts in the banking and financial services sector. “He made great achievements during his career that supported economic development in Egypt, stimulated the economy, and promoted the development of the Arab banking sector,” he added.

Fattouh highlighted Amer as the main coordinator of the economic reform program, agreed upon with the International Monetary Fund (IMF), and the driving force behind reforming the exchange rate system, a step that played a great role in putting the Egyptian economy on a sustainable path and restoring confidence among foreign investors.

He pointed to Amer’s commitment to implementing a prudent monetary policy, including clear inflation targets, timely communication with markets and the establishment of macro-prudential controls.

Within this context, GlobalMarkets newspaper, issued by the annual meeting of the World Bank and the International Monetary Fund, honoured Tarek Amer, naming him the Best Central Bank Governor in the Middle East and North Africa 2017.

“We believe that [the] CBE is the engineer of the IMF’s economic reform programme in Egypt. We also believe you played a pivotal role in putting the Egyptian economy on the right track and restoring the confidence of global investors,” said Toby Fields, chief editor of GlobalMarkets.

He noted that the great improvement in the Egyptian economy was due to the bank’s commitment to the monetary policy and to the process of conducting marketing communications in a timely manner.