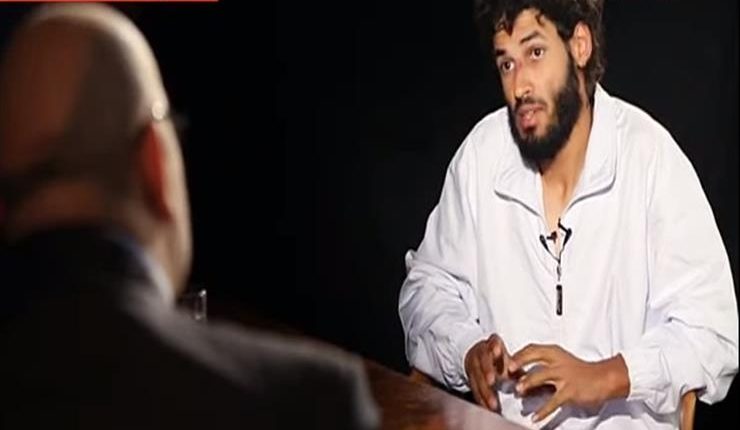 One of the tools that has served terrorists such as the Islamic State group (IS) is, unfortunately, the media, whether their own platforms or coverage they obtained after each attack.

The former is propaganda, while the second is meant to be documentation. In both cases, the audience is left with horrific images and footage.

Moreover, thousands of messages of hate are conveyed through mainstream media. When the platform is open to religious figures, controversy arises over what should be considered extremist and inciting.

Could we then bear to give those who advocate killing those of different faiths more media space?

In Egypt, a recent debate emerged when, on 16 November, Al-Hayat TV broadcast an exclusive interview by Emad Adeeb with Mohamed Abdel Reheem Al-Mesmari, who was captured by security forces in retaliation operations for Al-Wahat shootout, which claimed the lives of more than a dozen police officers, according to the Ministry of Interior.

Al-Mesmari, a Libyan citizen from Derna, was asked about the circumstances in which he joined extremist groups, the military training he received, and details of Al-Wahat shootout.

But half of the interview questions were about whether he had remorse, slept with a clear conscience, or felt okay about killing people.

When Al-Mesmari put forward a religious argument as justification for his killing he said that “Prophet Mohamed, peace be upon him, killed his own uncles,” Adeeb’s answer to such an allegation was that they were “infidels”, to which Al-Mesmari responded, “exactly”.

There was no further challenge; Adeeb didn’t question the statement – argued by scholars to be incorrect.

The anchor faced criticism. In response, he told state-run newspaper Al-Ahram that the interview was an “exclusive chance which I couldn’t refuse”, that he tried to be as “objective” as possible, and that his profession is about enabling others to express themselves.

However, many – who were not questioning his integrity or professionalism – were, rather, concerned that a person regarded as an extremist and terrorist killer was given a media platform.

Hossam Al-Sokkary, former head of BBC Arabic, wrote in a column for the local Al-Shorouk newspaper last week that Adeeb failed to send a responsible message on terrorism, instead giving a platform for the “terrorist” to send his ideas to millions of people.

Likewise, Al-Akhbar’s journalist Eman Rashed described the interview as a “one-sided dialogue”, opining that an expert on religious teachings should have been present to respond, as well as a psychological analyst to explain why the “blood-thirsty creature” felt no regrets towards murdering innocent people.

Al-Ahram’s Khaled Al-Asmai wrote that there is supposed to be confrontation between the culture of death and demolition and that of life, but instead, the interview resulted in creating supporters for those who have blood on their hands.

Journalist Ghada Atef explained that when she pursued a woman who joined IS, she was going to trace her radical transformation. Having background knowledge on her life, Atef wanted to ask her who influenced her or whether an unfortunate event had driven her.

“I was surprised because she was originally an open-minded person and suddenly completely changed. What were her reasons?”

Atef did not eventually reach her subject, but had she interviewed her, she would have aimed to shed light on the “terrorist, not religious” ideology, and would not have run the story as a one-on-one interview, but rather, talked to other sources as well.

As such, Atef argued that Adeeb failed at doing his job when he did not come prepared enough to reply to his interviewee who stated incorrect historical facts, which according to her, only showed how brainwashed he was.

“Had Adeeb challenged him, the core of the extremist ideology the interviewee tried to promote would have fallen to pieces,” she said.

As for journalist Asmaa Nassar, she interviewed members of Islamist groups such as the Muslim Brotherhood and the Salafists back in 2006. She viewed those encounters as journalistically “highly important”, though she also saw Adeeb’s interview as a failure.

Nassar said that at the time, she was observing the rising threat of extremists and wanted to raise awareness on their upcoming violence.

“I asked them about their personal lives, the environment they grew up in, social circumstances they faced. But I also had religious academic knowledge which I used to prevent reflecting their extremism in my articles,” Nassar said.

Yet, despite being able to challenge extremist ideology with religious arguments, some religious dilemmas cannot be solved, according to Nassar.

“Your sense about humanity and culture must be reflected, you must point out to the audience that there are different perspectives, such as highlighting contradictions in the religious texts,” Nassar said.

To her, Adeeb did not go deep enough when interviewing his subject, thus misapplying balance.

Impact on audience taken into consideration

Such concerns have already been tackled by journalists and experts worldwide.

In an article for the Guardian in November 2016, BBC presenter Samira Ahmed wrote that news editors might underestimate “the distress of hearing certain views expressed on air, especially if these are not challenged properly.”

“When I first reported on the rise of antisemitic and misogynistic Islamic radicals on Newsnight in 1994, our film didn’t simply put a leader on TV. We interviewed them, but also their critics, including other Muslim students,” Ahmed wrote – also pointing out to the same dangers of giving a platform to far-right racism.

Anjem Choudary, convicted for supporting IS, is an illustrating example of how radicals were given platforms to preach pro-terrorist messages in the media. He has several interviews available on YouTube.

CBS’ Clarissa Ward also interviewed Choudary on 60 Minutes, who was described by her producer as a “steamroller, trying to dominate the discussion and refusing to answer Ward’s questions.”

When Sun News Network host Ezra Levant interviewed Choudary, he faced him with atrocities committed by IS, which he not only falsely denied, but he succeeded in making the conversation about the Western world against Muslims. Choudary called Osama bin Laden a freedom fighter on air.

Experts have established that extremists will take media opportunities to promote their ideas, defend their right to killing, and attract more people. But journalists must bear in mind the messages they aim to send to viewers through interviewing them.

According to Eman Ragab, expert on regional security at Al-Ahram Center for Political and Strategic Studies, those who have not renounced their extremist ideology will aim at showing capacity and confidence when answering their interviewers’ questions.

“But a debate will show the weakness of their arguments, not only logically, but also factually,” she wrote in a recent op-ed for local website Masrawy.

Interviewing extremists developed from trying to acquire knowledge on background circumstances, recruitment, activities, and organisation, to focusing on personalities.

Among the most famous interviews with terrorists were those conducted by Al-Jazeera’s former investigative journalist Yousri Fouda, who sat down with 9/11 masterminds before their capture, Ramzi bin al-Shibh and Khalid Sheikh Mohammed.

Fouda’s series provided detailed information on how the plot was conceived, but in his book, In Harm’s Way: From the Strongholds of Al-Qaeda to ISIS Incubators, Fouda outlined how he was summoned to the interview and how they they were in control of the situation the entire time, including the camera, what could be shared, when, and where. “All I had to do was listen,” Fouda wrote, as he awaited the information and documents.

On the other hand, an interview with a supposed IS fighter in Syria published by Deutsche Welle in June 2015 had the following introduction:

“You might argue that one shouldn’t give a terrorist a platform to explain his views. But we wanted to know how a person of our age, with a similar educational background to us, can have such a fundamentally different worldview. We were deliberately open, to try to understand – although we might disagree with the other’s beliefs.”

The interviewers asked if their subject ever had doubts, what his daily life looked like, about his habits, and where he saw himself in “three or five years.”

The interviewee was able to promote an image of IS’ internal democracy and did not seem to regret his old life, saying, “we’re still buying and using smartphones and laptops, getting apartments and cars, using the internet frequently, sending our kids to school, and going to work.”

Evaluating the interview, Nathan S. French, assistant professor at the department of comparative religion at Miami University said that overall, it did not offer information that was not already stated by IS propaganda tools.

In 2014 and 2015, IS was on the rise and attracting thousands of foreign fighters. Interviews with them reflected strong beliefs and persistence.

But by the end of 2016, as IS suffered territorial losses and defeats, journalists started presenting a new image of delusional, regretful fighters.

In an interview published in 2017 by the Sydney Morning Herald after IS was pushed back from Iraq, journalist Michael Bachelard spoke with a defeated runaway fighter in Kirkuk.

The subject regretted joining the group, said it did not turn out to be the promised dream, and exposed atrocities and contradictions between their leaders’ actions and religion. In several instances, Bachelard insisted on the notion of crime and punishment, which he said could reach the death penalty.

Similarly, Kurdistan 24 covered, in 2017, stories on foreign fighters who ended up escaping IS and surrendering to security forces in Iraq, including an American Palestinian, a Swedish girl, and a Dutch woman.

Ragab argued in the same direction: a “hesitant terrorist” could be given space as sort of encouragement to resign, and a resigned extremist integrated in the society should be presented as an example of good behaviour.