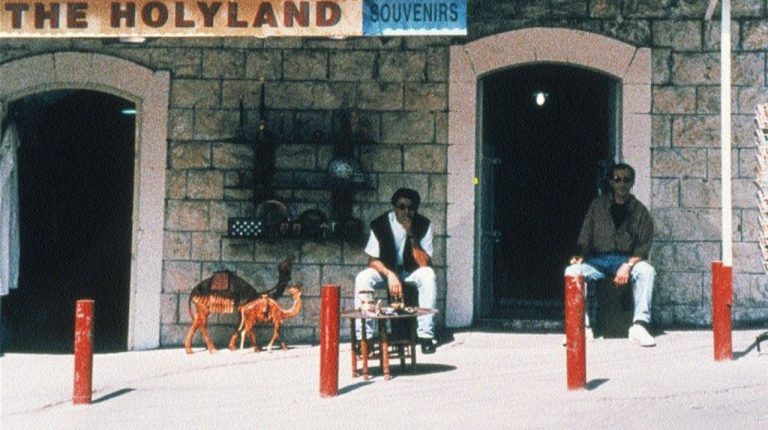 In Elia Suleiman’s first feature film, Chronicle of a Disappearance (1996), he depicts Palestinians through the theatre of everyday life. He does so by steering the film via fragmented and observational snippets of mundane life in the occupied territories. The seemingly unrelated vignettes, that lack introductions or conclusions, penetrate the livelihood of Palestinians that live in Israel, and by doing so, evoke feelings of a fractured culture and population, with barren opportunities for growth. Despite Suleiman’s film’s incoherency, this analysis will tackle it through the following motifs: sacredness of the mundane, the fruitless future that awaits Palestinians, and the loss of a collective Palestinian identity.

The film is defined by two chapters, distinctly separated as “Part I – Nazareth Personal Diary” and “Part II – Jerusalem Political Diary”. Part I is presented with a sense of stagnation and lack of urgency through unrelated tableaus that focus on the mediocrity of life in Palestine, and the audience is offered a voyeuristic lens through the placement of a static camera. In one scene, Suleiman’s mother, and presumably his aunts, are in the kitchen discussing the price of garlic. The film then cuts to the next scene where Suleiman’s father is feeding parrots, while the radio can be heard in the background broadcasting heated political news. Therefore, the film marginalises the heated political environment and rather focuses on the slow-paced way of life that is not portrayed in mainstream media. Palestine is a heavily politicised arena, if not the most, yet one is not watching or paying attention to the news, but rather the film’s attention is drawn to the old women’s conversation about garlic. By doing so, the film deconstructs the significance of hard-hitting news through its emphasis and intense attention to the mundane. In contrast, very sacred domains are not treated with this degree of serious vigilance, but are instead seen through a comedic light. For instance, a souvenir shopkeeper is shown to be filling glasses labelled as ‘Holy Water’, only for the audience to realize that it is in fact tap water. In Part II, this portrayal of the sacred persists, however, focusing more on the Israeli military. In this chapter, the Israeli Defense Forces (IDF), one of the most brutal forces in the world, are presented as comedic caricatures. For instance, in one scene, the military forces rush out of a van, only for the audience to find out that their urgency was for a wee. In another scene, Adan, played by Ula Taberi, gets hold of one of their walkie-talkies and orders them around the city like a little boy playing with his figurines. Therefore, it defiles the scared by making the mundane seem sacred.

Another ploy used in the film to intensify the mundane is repetition. One would assume that the reappearance of characters such as Suleiman’s mother or father would instil a certain intimacy between actor and spectator, but to no avail. Instead, audience members experience the feeling of an impasse. The lack of conversation, character development, and camera movement capture the essence of a deadlock future. This is further highlighted through the plight of Adan, a Palestinian woman who forgoes traditional custom by choosing to live on her own. Despite her fluent Hebrew, she is rejected by every Israeli landlord she contacts due to her incontestable Arabic name. In a sense, Seamus Heaney’s “you are neither here nor there” is a sentiment that so aptly fits as it illustrates the sense of disorientation Palestinians must feel as they live under two simultaneous statehoods. Additionally, the political irony behind Adan’s story is that her attempts to integrate are thwarted due to an ill-founded prejudice. The feeling of being left behind or left out is also highlighted in a scene where a flyer gets put up and locals come up to read it, however, due to the static camera, we are not permitted to see what is printed on it. This limited vantage point is a theme that haunts the whole film and adds to the notion that the Palestinian identity is a grim paradox. Furthermore, in one scene, an Orthodox priest stands at the Sea of Galilee and criticises the incoming flux of tourists that contaminate the holiness of the sea and expresses that, “they’ve expanded their world and mine has shrunk”; this is the guiding sentiment behind the Palestinian plight as demonstrated through Adan’s conflict or through the Suleiman household where they speak Arabic but go to sleep to the sound of the Israeli national anthem.

That is why it is important, more than ever, to chronicle the disappearance because if there is any hope to capture the Palestinian identity and materialise it before it disappears, one must record it. It becomes clear towards the end that it is not about a coherent structure, but rather, that these incoherent portraits are strands that serve as the genetic make up of Palestine, as a whole. By capturing the mundane as sacred, through intense scrutiny, and treating the sacred with humour, Suleiman reveals that the construct of ‘identity’ is a fabricated notion and the lines between identity and nationality are as foggy as the film’s lines between the mundane and sacred.

Topics: Chronicle of a Disappearance film Fragments of Broken Glass