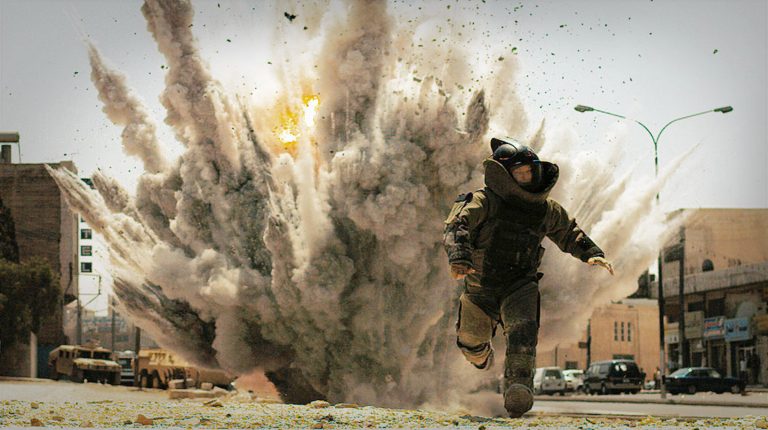 Somewhere in Iraq, a soldier steps forward to disable a bomb, some tension rises and then boom, the bomb explodes. After his death, the main protagonist of the film Sergeant William appears to take the lost one’s place. William is a stubborn, sarcastic, well-trained explosives expert who is always fixing issues even when he does not appear to be so much committed to the military’s discipline.

Although tension was well crafted in the first scene of the movie, it loses all its pace in the rest of the film except for some lonely moments in the film. When William goes to disable his first bomb, the tension is reduced to half the tension in the first scene because it is very predictable in a war movie that the coming sergeant is much smarter than the previous one, and his stable manner of handling the bomb looks like he is playing some kind of a video game, and afterwards when he takes off his armour while dealing with a car filled with explosives, making him similar to some kind of a super bad-ass man who couldn’t care less about his dangerous job.

The drama builds up in the film, Sergeant William establishes a good relation with a kid selling DVDs, he plays football with him, and in the next events of the film, the kid ends up as another victim of the “bad” Iraqi bombers. This kid resembles the kind of Iraq that America hoped to see: some peaceful Iraqi who welcomes the invaders of his land and deals with them as his friends.

But let’s take a more precise look at this film’s details, which reveal a lot about the director’s pro-war point of view. The American soldier is always in a defensive position, always acting with great responsibility toward the Iraqi people, even if they’re suspect. So what kind of idealistic war is it where soldiers don’t ever shoot a possible suspect, regardless of who’s right and who’s wrong? But these are some kind of ‘human rights soldiers’, not the American army ones.

William’s lovely character makes us sympathise with him as he is always trying to save both the army and civilians from the evil of Iraqi bombers, in this film we are always on the American side, and here, the director once again ignores the reason these bombs exist. Of course, the director has the right to shoot the film from this point of view, but with such flat good and evil characters, we feel that it is just some kind of pure propaganda and some other silly justification of the war itself.

In Full Metal Jacket, directed by Stanley Kubrick, the soldiers commit some terrible acts against the Vietnamese people, but the director succeeds in depicting the great psychological impact they face due to their acts, and this is the difference between ideological propaganda film and another film that deals with the war subject without ignoring obvious, simple logic.

Although this logic is completely irrational to anyone who has a bit of information about any war or conflict, the director’s visual choices of shooting the soldiers in silhouette kind of lighting is a very rational choice for what she is trying to tell, that these soldiers are just employees that don’t intend to harm anyone other than some bad Iraqi guys refusing to hand their country over to the democratic United States of America. The weird thing about this film is that attempts, at certain times, to build some appropriate tension in the bomb-disabling scenes, and in other scenes, you get the impression that it is really just a video game where you can replay or restart.

The film ends with some idealistic lines of dialogue that assert the main point of view clarified before, and it is really provocative how much the director ignores all legitimacy, in order to deliver some kind of an ideological message to her audience.