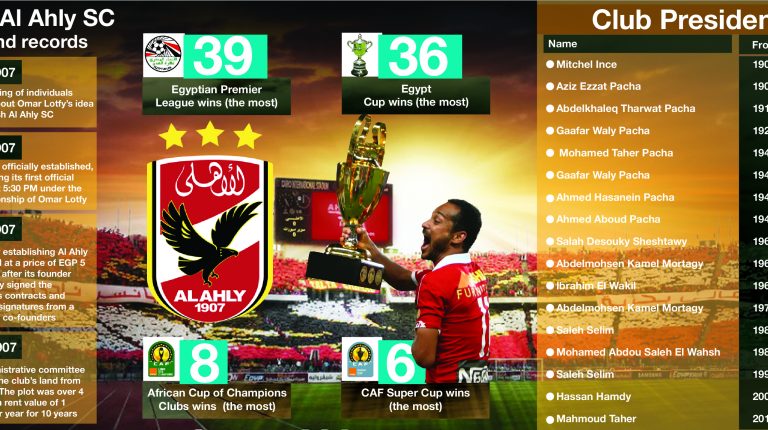 There is a powerful, brewing battle between Mahmoud El Khatib, the candidate for the presidency of Al Ahly SC and Mahmoud Taher, the current president of the club, to take the throne of the Red Castle in the current election.

The election will be held under the guidance list system approved by the Olympic Committee, headed by Engineer Hisham Hatab, after the cancellation of the General Assembly held in late August at Al Ahly over two days. The committee refused to recognise that body.

El Khatib and Taher’s lists have witnessed a fierce war in the mobilisation of stars and celebrities in order to gain support in the upcoming elections, in addition to forming voting blocs.

In Khatib’s list, there are several businessmen or their sons that support him in his battle against Taher.

Among these names is Mohamed El Damaty, owner of one of the largest cheese companies in Egypt, who is a candidate on Khatib’s list, in addition to Mohamed Gamal El-Garhy, who is the son of business mogul Gamal El-Garhy and owner of an iron and steel company. Both are under age candidates.

Also among the names are El Amry Farouk and his brother, who own the largest experimental schools in Egypt and constitute one of the most important voting blocs on the list. In addition, there is Yassin Mansour, a businessperson, who supports Khatib’s list but will not be competing in the elections, as well as businessperson Safwan Thabet of Juhayna.

On the other side, Mahmoud Taher’s list is supported by Ahmed Abu Hashima, the prominent businessperson, who is harnessing his financial capabilities to serve Taher in his battle against Khatib.

Without a doubt, the role of Abu Hashima alone can give Taher electoral and financial weight in the face of Khatib in the elections, but will likely to be the final determinative factor.

Among the most prominent supporters of Taher is Presentation Company, which sponsors the Egyptian Football Association, chaired by Mohamed Kamal. It is the same company that sponsors Al Ahly SC and is its main source of funding. The company will also not shy from backing Mahmoud Taher in the upcoming elections.