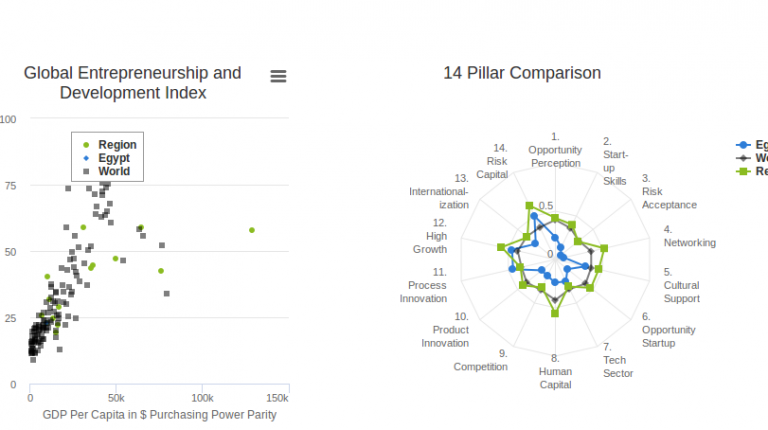 The past few years have seen the term entrepreneurship echo many times among the Egyptian youth, specifically since the 2011 revolution. The startup sector has seen accelerating growth. Many companies have achieved strong growth, while others drew in funding from Egyptian and regional venture capitalists, which attracted investors interested in emerging companies to consider Egypt as a promising market.

Last year, Algebra Ventures fund was launched with a capital of over $50m. Its main contributor is the global company Cisco and it is managed by Tarek Asaad and Khaled Ismail.

The government has also started payng more attention to the sector, establishing Misr Entrepreneurship Company. The startup culture is spreading among youth—many companies have emerged, with some of them falling quickly, while others continue to pick up pace and attract further funding and investments. This prompted Daily News Egypt to look for Egypt’s rankings in the entrepreneurship and startup industry on the regional and global levels.

A  Global Entrepreneurship & Development Index (GEDI) report has ranked Egypt at 13th across the Middle East and North Africa in the entrepreneurship industry and 81st globally.

The report highlighted 14 factors that measure the efforts made on each of them on the global level.

For Egypt, the “risk acceptance” factor showed 23% improvement this year over the past year (y-o-y). This could be attributed to the emergence of several venture capitals on the local market, while networking saw an improvement of 20%.

“Startup skills” also showed a 16% hike, while “opportunity startup” indicated a 13% improvement, next to “product innovation” which recorded an 11% improvement y-o-y.

The “internationalisation” pillar, according to GEDI, showed a 3% improvement.

Yet, the report stated that Egypt did not accomplish any improvement in factors measuring “cultural support”, “process innovation”, “high growth”, and “risk capital”.

Global Entrepreneurship and Development Institute, which produces the index, is a research organisation founded by world-leading entrepreneurship scholars from the London School of Economics, George Mason University, the University of Pécs and Imperial College London. It is based in Washington DC and dedicated to expanding economic opportunities for individuals, communities, and nations.