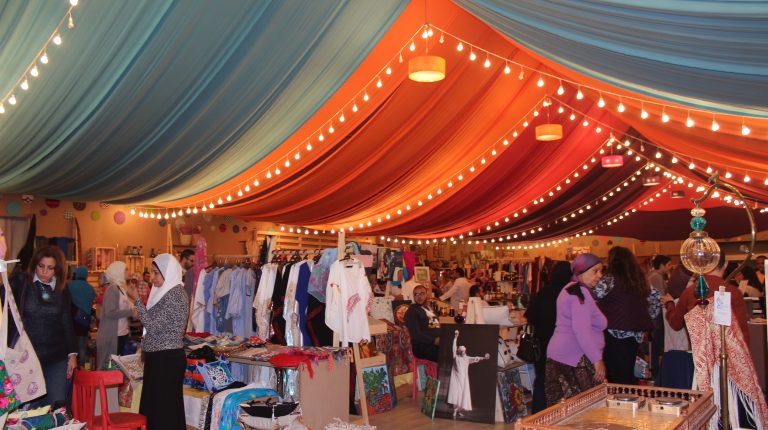 The second edition of the International Handicrafts Show took place at the Cairo International Convention & Exhibition Centre from 15-24 November.

The exhibition aims at preserving the heritage of handicrafts in each region of Egypt, as the exhibition includes exhibitors from all governorates. Daily News Egypt took a tour of the exhibition.

The first section of the exhibiton was “Ebda3 Men Masr”, that was launched and sponsored by the Bank of Alexandria, which is a strategic partner of the event.

First Egyptian woman to participate in an international ceramics exhibition

The first artisan seen upon entering the first section is Rawya Abd El-Kader sitting in front of her many coloured ceramics. The elderly woman said that she started working in ceramics since she was 12 years old.

“We were children playing with mud, making different shapes with it in the village, then a Swiss ceramic artist, called Éveline Boudreau, saw us and offered to let us attend her ceramic school in the village where she would teach us the craft,” Abd El-Kader said.

Rawya added that her family refused her participation in the ceramics school.

She said that she stubbornly opposed her family’s refusal and continued at Boudreau’s school, becoming its first student at the time.

“When I was a teenager, Éveline offered to take me on a trip to Europe to show my products in an exhibition, so I was the first Egyptian woman to participate in an international exhibition for ceramics,” Abd El-Kader said.

“All the people in the village used to treat me as if I was doing something wrong, but I insisted on travelling with Éveline to Paris then when I returned, I opened a workshop in my village and taught the art of ceramics,” Abd El-Kader continued.

She said that she has 47 women and three men training in her workshop, whom she taught. She added that the ceramics industry is time consuming as making ten plates takes a week to complete.

rug industry developed to make tabloids with the addition of paintings and designs, after the use of wool thread to add colour

During DNE’s tour of the exhibition, there were drawings and writings on mats, sitting beside a 60 year old man on the ground making another one of these mats. Mohammed Fawzy is from Damanhour, the homeland of handmade mats.

He spent 48 years making mats out of crops grown with Nile water.

Fawzy began telling his story by saying that in the past, all Egyptians had to sit on handmade mats, but after plastic mats came, the mat-making industry disappeared.

He added that this industry is a global one that should not vanish, so he decided to improve it by adding writings and designs to them.

Moreover, mats developed to become like tabloids after the addition of paintings, designs, and the use of wool thread.

Meanwhile, Fawzy talked about the prices saying that it starts from EGP 200 to EGP 3,000.

“Obtaining raw materials is one of the biggest obstacles that I face, because I get crops from the Nile, meanwhile, the Ministry of Irrigation is limiting the existence of these raw materials under the decree to clear the banks and canals,” Fawzy said.

Fawzy said that he dreams of writing the entire Holy Quran on rugs and stated that he already finished four pages of it until now, calling on the government to support his project.

Similarly, he said that he made a rug with Allah written on it and granted it to the Museum of Islamic Art in Cairo.

A Nubian woman wearing a traditional Nubian dress smiled while presenting her woven products as well as handcrafts embroidered in an attractive manner.

Her name is Sanaa Mohamed and she said she knows nothing in life except handcrafts and embroidery, which is her only source of income, so she goes from east to west in search of her livelihood.

She also said that she suffers from higher prices of raw materials, explaining that a kilogram of beads reached EGP 130 and a metre of cloth reached EGP 13.

Furthermore, she called on the government to make a permanent exhibition in Aswan to provide a steady source of livelihood for her.

Carvers dream of exporting their art to the world

Another artisan seen on the tour was Adel Mahmoud, who has dedicated his life to carving on the wood of palm trees.

He said that he has been working this job for more than 15 years, explaining that the raw material that he uses for carving, which is the wood of palm trees, is readily available in his governorate, the New Valley, but it is usually wasted.

A woman named Amal Mansour interrupted the dialogue to say that Mahmoud has had the hobby since he was a child, also saying that she too works in craving, but uses sandstone.

Furthermore, she added that she graduated from the Department of Carving in the Faculty of Fine Arts, but she preferred using raw materials like sandstone in the New Valley, rather than the raw materials that she studied about.

Moreover, they both talked about their dreams saying that they hope to market more products locally and then export their art to the whole world.

Finally, they concluded saying that raw materials may now be available and cheap, however, it takes effort to find the best piece of palm tree wood or sandstone to use.

A group of girls and women were standing around a Bedouin woman from North Sinai’s booth. Her name is Sabha Abdallah and she presented Bedouin folk costume.

Abdallah said that making these clothes takes a lot of time so she increased the labour force to now reach 632 families working on this craft with her.

Also, she added that this was not her first time to participate in the exhibition, pointing out that if it were not for a grant from the Bank of Alexandria, she would not have participated due to the high cost of fees.

Moreover, she added that her products bring a strong turnout from the Egyptian people.

“I also market my products through the Ministry of Social Solidarity through their “Diarna” exhibition, held three times a year.

Copper’s forms and shapes attract the eyes of the customers

In another section of the exhibition, specialised for companies and factories, there lay various copper forms that attracted attention. The man who made them is named Mohamed Gamal and he has been working in this field since he was seven years old.

Gamal said that he worked as an assistant in a workshop in Manshiet Nasser where he gained great experience that helped him open his own workshop in El Gamalia.

Furthermore, he added that he implements received work orders at the workshop, but has no space to present his work, so he demands that the government make more exhibitions.

He explained that he markets his products through Facebook.

Finally, he also said that he suffers from the higher prices of raw materials, pointing out that the price of copper reached EGP 200 per kilogram instead of EGP 80.

“I can’t increase product’s prices as the raw materials increase, because customers will not accept this higher price”

In the same section was a woman named Nermine Hamed, who has a workshop for making floor lamps, hooks, and baby cribs.

She said that she makes the floor lamps using organza cloth.

“I learned this industry from a big artist called Mogy El Kateeb’s school,” according to Hamed.

Moreover, she added that she participated in the exhibition last year, but this year there is a great interest in exporting her products, as the Egyptian Export Council for Handicrafts invited many foreigners who came and took artisan’s contact information.

Further more, she said that she used many raw materials, but the most common obstacle is that their prices increase everyday and, on the other hand, she cannot increase her product’s prices accordingly, as customers will not accept these higher prices.

The charitable organisation Misr El Kheir Foundation had its own section at the exhibition, where a man named Ibrahim Ahmed showcased carpets and small rugs that he makes out of loom.

He said that he left school and began working at a factory in Alexandria, owned by Misr El Kheir, where he learned the handwoven carpets craft and how to use loom.

Ahmed added that he entered this field at first because he did not have a job, but once in it, he enjoyed it.

Moreover, he added that the prices of these products range between EGP 1,700 and EGP 12,000, depending on the number of suture complexity made using loom.

He concluded saying that he dreams to have a large carpets project and to export his products globally.