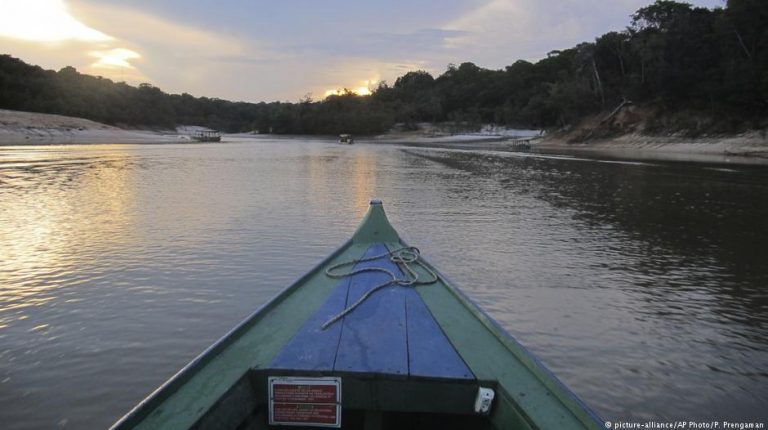 The Amazon is not visited in great numbers. But the adventurous tourists who go there are rarely disappointed.”Look before grabbing any branches because the ants bite. You will be in pain for 24 hours,” said Jackson Edirley da Silva, wearing a bright yellow shirt and rubber boots. The warning from our guide made clear that this “forest walk” would be anything but a leisurely stroll. “And watch where you step. You don’t want to get bitten by a snake.”

Our group, about a dozen tourists, got quiet. “Don’t worry,” I whispered to our sons, ages 6 and 7. “We will be careful where we step.”

My wife and I had flown with our kids from Rio de Janeiro to Manaus, a major jumping-off point for Brazil’s Amazon rain forest. The gritty port city of over 2 million people reached its splendor in the 19th century when growing global demand for rubber brought throngs to the area to cut and gather sap from rubber trees. A beautiful opera house built during that time, which today hosts several shows each year, is the city’s main tourist attraction.

From Manaus into the Amazon rainforest

From Manaus, we took a boat for an hour ride up a tributary of the Rio Negro, or Black River, and then walked 15 minutes to an “eco lodge” in the middle of a forest.

Even at the edge of the forest, monkeys screeched, birds bellowed and bugs buzzed, a cacophony that felt both terrifying and calming. Ironically, we would learn that it’s rare to actually see most of the animals. You are in their house, and they know how to hide.

Our cabin was sparse but had some essentials: a small refrigerator for bottled water, mosquito screens on the windows and an air-conditioning unit that combated the oppressive humidity that would cling to us upon walking outside.

Over the course of a week, we swam with fresh water dolphins, gawked at alligators wrestled from river banks by scrappy guides, fished for piranhas and stood in awe at “the meeting” of the Negro and Solimoes Rivers (called the Amazon River in Manaus and eastward), where a difference in density and temperature means that black and yellow waters flow side by side for miles.

The food also has unique tastes. Massive tucunare fish get chopped into fillets that taste like chicken with an extra dose of zest, potato-like manioc roots are prepared with forest spices that most people have never heard of.

Te Batista, a boat operator who took us to several areas of the Rio Negro, meets many tourists who ask him about conservation: “Foreigners are afraid about the future of the forest,” said Batista, who added flatly that he was not. “They worry that the cutting here will mean they die in their countries,” because of global warming.

One day we visited a small village of about 100 people belonging to the Dessana tribe. The village is only about a 90-minute boat trip from Manaus but worlds away. Speaking limited Portuguese, a young man named Bohoka told me the tribe lived as they always had – in little huts without electricity, running water or cellphones – but with a few modern twists that included allowing tourists to visit. “Tourism allows us to maintain our way of life,” said Bohoka, 24, who showed us necklaces and other handcrafts for sale.

As I chatted with Bohoka, a small boat pulled up on the riverbank. About a dozen members of the tribe, all dressed in slacks and T-shirts, got off carrying plastic bags. They disappeared into their huts and reemerged a few minutes later wearing traditional clothes. Bohoka explained they had gone to “the city,” or Manaus, to buy sewing materials.

Despite its worldwide fame, not to mention increasing importance as climate change becomes a global issue, the Amazon is not visited in great numbers. Amazonas, Brazil’s largest and heavily forested state, which includes Manaus, was visited by just under 1.2 million foreign and Brazilian tourists in 2014, the most recent year for available statistics. By comparison, the Eiffel Tower in Paris gets roughly 7 million visitors a year.