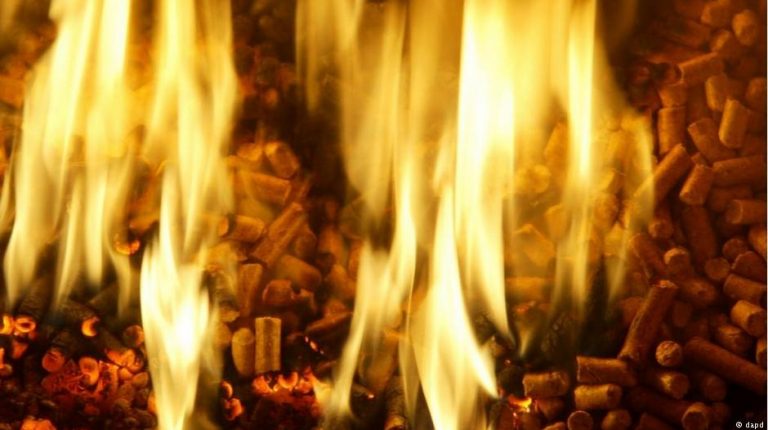 To meet the EU’s renewable energy target, countries have rediscovered wood as a fuel. But conservationists fear this new hunger for wood might have disastrous consequences — for the forests, the people and the climate.You may think that conservationists would be happy with the European Union’s (EU) goal to switch from fossil fuels to renewable energy. However, the reality of the issue is not that simple.

They claim that a new demand for wood is driving deforestation and boosting carbon dioxide levels, as well as dangerous particulate matter emissions.

The EU Renewable Energy Directive from 2009 requires member states to include renewables in 20 percent of their energy needs by 2020.

This week, the European Parliament’s Committee on Industry, Research and Energy (ITRE) voted to increase the renewable energy target to 35 percent by 2030 and to introduce an additional target for renewable heating.

But while some renewable energy supporters across Europe are celebrating, others are horrified.

In 2015, biomass accounted for about two thirds of the EU’s renewable energy consumption, with wood and wood products making up about half of the used products.

Compared to other biomasses derived from plants, like leaves and stalks, wood’s higher mass density means more energy can be stored in the same volume, making it a perfect fuel for power plants and heaters.

According to a study commissioned by the NGOs Birdlife Europe, Forests and the European Union Resource Network (FERN) and Transport & Environment, the use of wood for energy purposes increased by about 75 million cubic meters between 2010 and 2015 — an uptick of 21 percent.

The initial idea of the EU’s policy was to produce energy from residues, says Linde Zuidema from FERN — for example from the parts of a tree that can’t be used for furniture and other products. “But in some areas in Europe, it is leading to increased harvest,” she says.

According to FERN, Slovakia’s and Romania’s forests are being chopped down to meet the EU’s newly-risen demand for wood.

Zuidema is urging the EU to recognize that even though wood is a renewable source of energy, “it is a limited resource.”

Some countries – including the UK, the Netherlands, Belgium and Denmark – have built new wood-fired plants or converted coal-fired plants to produce electricity from burning wood.

Drax power station in North Yorkshire, England, is the UK’s biggest power plant and provides about 7 percent of the country’s electricity. The company boasts that it generates 70 percent of its electricity from compressed wood pellets rather than coal. But part of their wood source comes from the US.

Read more: How the EU’s green energy drive is hitting US forests

“The USA is now the main supplier of wood pellets to Europe,” US and Dutch researchers write in the journal Biofpr – Biofuels, Bioproducts and Biorefining.

European pellet consumption reached 7.3 million tons in 2015, with about 4.6 million tons being imported from the southeastern US.

How climate-friendly is it really?

When power plants burn wood, they can claim to emit zero carbon dioxide.

In practice that’s not true of course, and depending on the water content of the wood, wood-burning furnaces might emit even more CO2 than coal-burning plants per unit of electricity produced.

The popular notion is that if you cut down a tree, burn it and plant a new tree in its place, you are simply recycling carbon.

But as Zuidema points out, “forests and trees have a very important role to play while they are alive and standing in the forest as a carbon sink.”

Cutting down trees that are still sequestering carbon is a big mistake, she says — even if young trees might indeed replace the older ones one day: “Forest biomass is not carbon-neutral at all.”

In Germany, particulate emissions from small wood-burning units can even exceed the ones coming out of the engines of cars and trucks.

Together with other conservationists, Zuidema wants the focus to stay on solar and wind energy to replace fossil fuels.

But some researchers are still divided on the issue.

In February 2016, 65 US scientists sent a letter to the US Senate warning that following the EU’s lead in giving forest biomass a carbon-neutral label could lead to serious harm.

But only a month later, more than 100 scientists took the opposite view when writing to the Environmental Protection Agency (EPA), claiming “that the carbon benefits of sustainable forest biomass energy are well established.”

In a simulation study, researchers concluded that an increased demand for wood fuel could cause ecosystems in North Carolina to shrink by about 10 percent until 2050, replacing natural hardwood and pine habitats with intensively managed forests.

Still, others presume that this new hunger for wood will have a positive effect, creating incentives for landowners to grow trees and properly manage forestries.

As far as logging in Germany goes, Matthias Dieter, director of the Institute of International Forestry and Forest Economics in Hamburg, gives the all-clear.

“The forest area and its biodiversity in Germany are growing,” he tells DW.

Fuel wood used in Germany comes from sustainably managed forests, Dieter points out. “We don’t have any major imports of fuel wood from other countries.”

He says that “the forests in Europe remain stable.”

So burning wood doesn’t need to be catastrophic for the environment — if done in the right way.

But Sievers admits that some criticisms of the international wood pellet market are “justified,” so consumers should make sure to do their research before buying a product.

One big question remains though: What would happen if more people in Germany suddenly decided to install wood pellet-based heating?

During the COP23 in Bonn, China and 18 other nations announced plans to increase the use of wood and other plant matter as a means of generating electricity.

Announcements like this have left some conservationists deeply worried that if too many countries follow the example of the EU, the situation will only get worse.