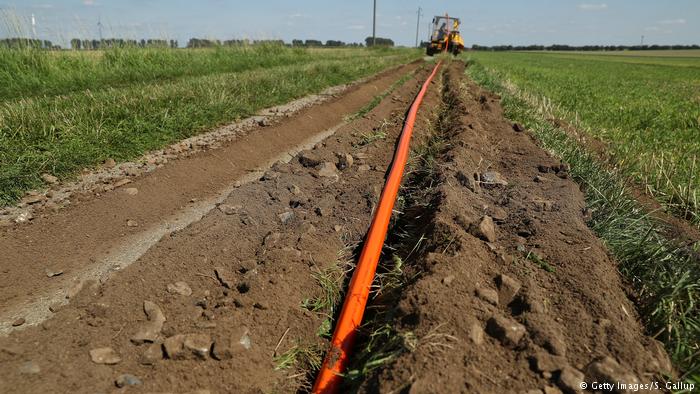 German economists have proposed an ‘investment agenda,’ calling for a massive boost in public spending on infrastructure and education, to boost the nation’s productivity. They say it would more than pay for itself.A well-timed new report on Germany’s investment requirements has been released this week by Tom Krebs and Martin Scheffel, experts at the Universities of Mannheim and Cologne. Entitled “Public Investments and Inclusive Growth in Germany,” the report, which was sponsored by the respected Bertelsmann Foundation, proposes major new public investments in three categories: Education, transport and digital networks infrastructure, and residential buildings construction.

Krebs and Scheffel say that their economic models show that the proposed investments would “strengthen the growth potential of the German economy, and in the long term, result in a significant increase in aggregate economic production.”

In addition, public investment in kindergartens and full-day schools as well as residential buildings would generate a substantial reduction in poverty and an improvement in equality of opportunity. It’s an agenda which the authors describe as “inclusive growth.”

The Social Democrats are likely to be substantially more supportive of a big new public investment push than the fiscally stingier, libertarian Free Democrats tend to be.

While there are regional variations — schools are administered by the provinces, or ‘Länder,’ not by the federal government — a typical schoolday in Germany starts at 8 AM and ends at 2 pm. This can present logistical problems for the many families in which both parents work at full-time, nine-to-five jobs.Krebs and Scheffel propose a permanent increase of €10 billion ($19 billion) a year to improve kindergartens and schools, and to extend school-days later into the afternoon. In their view, all-day schools will both improve childrens’ educational outcomes, enhance the cultural integration of the very large number of foreign-born schoolkids, and free up both parents in lower- and middle-income families to take full-time jobs.

The report proposes a permanent increase of €5 billion per year on public spending on transportation infrastructure and the construction of a “modern digital infrastructure.”

In view of the rapid evolution of digital technologies, broadband fiber-optics networks should be expanded even beyond the German government’s existing, fairly ambitious plans in this respect, which date from 2014, according to Krebs and Scheffel. They estimate that an additional €60 billion to €100 billion will have to be spent in total over coming years, in excess of what had already been planned, in order to complete a nationwide fiber optic network capable of future data transmission speeds of several gigabits per second.

Finally, the report calls for a permanent increase in public investment in social housing, to provide affordable homes for low- and middle-income urban families.

The proposal calls for a gradual increase in spending on social housing, levelling off at about €20 billion a year from 2022 forward. This would imply additional spending of about €40 billion in total over the coming four-year period.

Taken together, the added spending, the authors say, would entail an increase in Germany’s national gross domestic product (GDP) of about €50 billion a year by 2030, yet cause no increase in public debt, even in the short term. That’s partly because the German government is currently running surpluses, but also because the investments proposed would increase the pace of GDP growth as well as improve productivity, in a virtuous circle, leading to a very healthy estimated “fiscal return on investment” of 9.0 percent.

Krebs and Scheffel’s economic modelling also estimated that the proposed investments would generate about 160,000 additional new full-time-equivalent jobs by 2020, and more than 350,000 new jobs by 2030, compared to business-as-usual.

In an article entitled “Where and how much the next government should concretely invest,” in the online economics journal “Makronom,” co-authored by Bertelsmann Foundation economist Manuela Barisic, Tom Krebs and Martin Scheffel conclude with an invitation to the next coalition government:

“Our research shows that public investment in education, housing and infrastructure is the order of the day under prevailing conditions. A lasting increase in government spending in these areas is worthwhile from a macroeconomic and socio-political perspective. Moreover, there is currently no alternative use of budget surpluses with comparablly strong positive effects. The next federal government should therefore launch an investment offensive deserving of the name.”