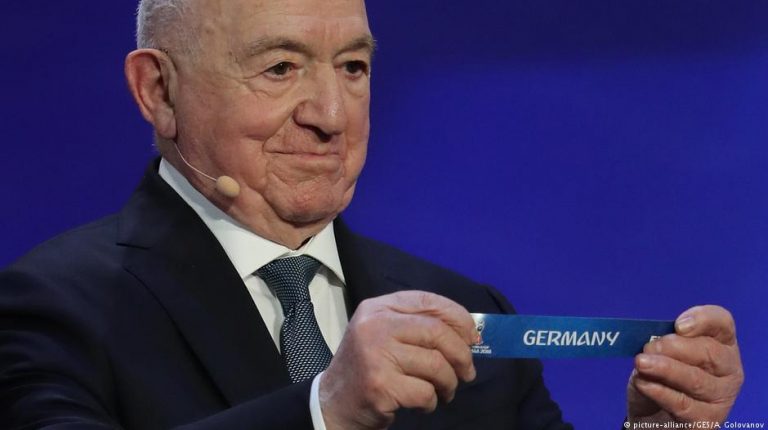 The reigning World Cup champions will begin the defense of their title against Mexico in the Russian capital on June 17 before traveling to Sochi to face Sweden on June 23. Their final group stage game will take place against South Korea in Kazan on June 27.

On paper, Group F looks like one of the toughest groups but it is a group Germany will likely have to win if they are to avoid Brazil in the last 16. The Brazilians are clear favorites to top Group E ahead of Switzerland, Costa Rica and Serbia.

“All the other countries have been watching us closely as champions, including at the Confederations Cup,” said Germany coach Joachim Löw, who attended the draw. “But I think other nations have caught up somewhat and have some great players. It will be an exciting World Cup here in Russia and we’re all looking forward to getting started.”

As always, the hosts, Russia, were first out of the hat and were joined in Group A by Saudi Arabia, Egypt and Uruguay. After a disappointing performance at the Confederations Cup last summer, coach Stanislav Cherchesov will be confident of progressing to the last 16 when it really matters. They will kick off the tournament against the Saudis on June 14.

Among the other tournament favorites, Spain and Portugal were drawn together in Group B which, along with Morocco and Iran, has a distinctly Mediterranean flavor. France, who knocked Germany out of Euro 2016 at the semifinal stage, have a favorable draw on paper; Didier Deschamps’ hugely talented team face Australia, Peru and Denmark.

World Cup debutants Panama, who shocked the United States in qualifying, landed in Group G along with Belgium, England and Tunisia, while Iceland, the smallest nation in the competition, face tough tests against Argentina, Croatia and Nigeria in Group D.

Relive the draw and reaction as it happened on the DW live blog:

16:43 The Mexican FA said they were afraid of nobody in their group, not even Germany.

16:40 The Swedish newspaper Expressen has expressed horror at its national team’s draw: “There were three or four teams that we really didn’t want, and one of them was Germany!”

16:38 Manuel Neuer added that “Mexico tends to play very aggressive football, while we know how to approach Sweden. They knocked out Italy, so we certainly won’t take them lightly. South Korea is also a strong team. It is an interesting group with opponents from three continents.

16:35 Germany captain Manuel Neuer: “We have been drawn against opponents who are not unknown to us… They are all opponents that we will have to take seriously, but our clear goal must be to finish top of the group.”

16:15 Germany’s first match is to be against Mexico in Moscow on June 17. The Germans then face Sweden in Sochi on June 23, before wrapping up the group stage against South Korea in Kazan on June 27.

16:12 The German football association (DFB) president, Reinhard Grindel: “It’s a very interesting group for our team. The preparation for the first three opponents at the World Cup begins now for Joachim Löw and his team.

16:08 Germany head coach Joachim Löw has given his reaction to the draw. He said Group F included “very interesting opponents.” He also said Germany intended to use the group-stage matches to lay the foundation for a successful defense of their World Cup title. “This is our goal.”

15:49 The third deam in Group G is Tunisia. They will face England in their opening match.

15:48 Sweden are Germany’s next opponents, they are drawn into position three in Group F.

15:48 Costa Rica are drawn into third place in Group E with Brazil and Switzerland.

15:47 Iceland will make their debut at the World Cup from the second position in Group D. That means they’ll open their tournament against Argentina.

15:45 Denmark have been drawn. They can’t go into Group B, because there are already two European teams. They are placed in fourth spot in Group C.

15:44 Egypt enter Group A. They slide into the third spot.

15:44 Colombia are in third position in Group H with Poland.

15:43 England are drawn in to the final position in Belgium’s Group G.

15:42 Germany draw Mexico in their Group F. They slide into second spot, meaning Germany’s opening match will be against Mexico.

15:41 Switzerland go into the second position in Group E.

15:40 The Croatians, who needed the playoffs to qualify, are in third position in Group D, Argentina’s group.

15:40 Peru are drawn in at the third position in Group C with France.

15:38 Now we’re on to Pot 2, with Maradona doing the honors. He pulls out Uruguay first. They go to the bottom spot in Group A with Russia.

15:32 Gordon Banks draws Russia’s playing, they are top of Group A. Kind of fitting as the hosts!

15:32 Simonyan draws the first team and it is Russia!

15:29 The main presenters are there (which is a good sign); former England star Gary Lineker and the Russian television presenter, Maria Komandnaya.

15:26 Banks is followed by the Russian representative, Nikita Simonyan, and several other former stars, including Argentina’s Diego Maradona.

15:25 Many former World Cup stars are in attendance for the daw and some of them are now being introduced, starting with England’s legendary goalkeeper Gordon Banks…

15:16 Now we’re starting to get down to business though, as former Germany striker Miroslav Klose brings in the World Cup trophy, which of course, was won by the national team in Brazil in 2014. Klose, of course, is the top scorer of all time at the World Cup, with a total of 16 goals between 2002 and 2014.

15:14 As is always the case at such affairs, the evening begins with the showbusiness side of things.

15:12 There’s been a bit of light snow in Moscow as the guests arrived to watch the draw. Among them are Germany coach Joachim Löw and national team manager Oliver Bierhoff.

15:01 We are just minutes away from the start of the draw for the World Cup in Russia next summer. The defending champions, Germany, are in Pot 1, along with most of the other favorites.

The draw for the group stage of the 2018 World Cup in Russia is to start at 6 p.m. Moscow time (15:00 GMT) in the concert hall of the State Kremlin Palace in the Russian capital. This is when national team coach Joachim Löw will find out in which of the eight groups Germany will play next summer – and who the compeition will be. That’s not to mention the other 31 head coaches and their teams…

With less than an hour to go until the draw starts you can read up on which countries are in which “pots” and some of the possible group scenarios Germany might face here.

Russia’s first World Cup comes as Moscow continues to struggle with doping and the IOC, potentially even threatening its place at the Winter Olympics in South Korea. Earlier on Friday, Russia 2018 organizing committee boss Vitaly Mutko rejected separate allegations about the national football team and hosts.

For all of Russia’s sporting success, football was never really the country’s forte. Will the tournament finally impact on that? Emily Sherwin filed this report from Moscow for DW.

Where will the games be played? Are the grounds ready? Below, we’ve got a look at the venues for you.