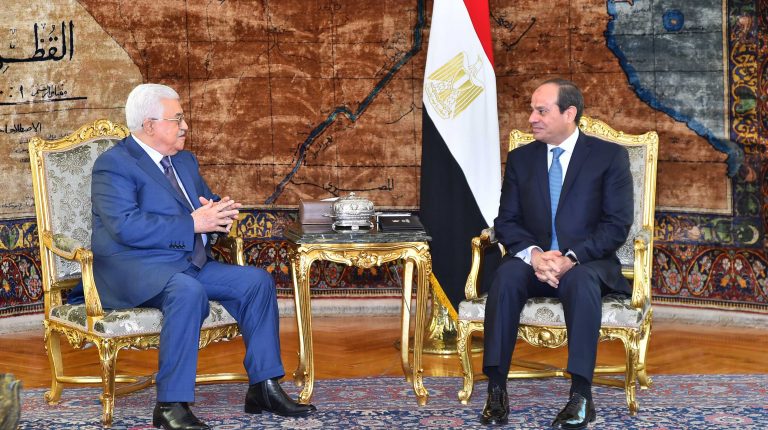 Egypt’s President Abdel Fattah Al-Sisi discussed the updates on the Palestinian reconciliation negotiations with Palestinian Authority President Mahmoud Abbas on a phone call on Saturday, according to a statement issued by Presidency Spokesperson Bassam Rady.

During the phone call, Al-Sisi asserted Egypt’s keenness on reaching a comprehensive and fair solution to the Palestinian issue. This solution should guarantee the right of Palestinians to establish their own independent state in accordance with international resolutions, Rady added.

Abbas expressed his country’s appreciation for Egypt’s efforts and its historical role in supporting the Palestinian cause. He also praised the Egyptian role in achieving Palestinian reconciliation, which he said would help enable the Palestinian people to face all challenges.

Both Al-Sisi and Abbas agreed to continue coordination and consultation regarding the developments of the Palestinian issue, and ways of resuming negotiations between the Palestinian and Israeli sides.

Meanwhile, senior Palestinian officials from the two major Palestinian movements Hamas and Fatah met in Cairo on Saturday to discuss the remaining obstacles to reconciliation, as well as enabling the reconciliation government to carry out its duties in the Gaza strip.

Hamas Leader in Gaza Yahya Sinwar represented the movement in the negotiations, while Azzam Al-Ahmed, the Fatah official charged with the reconciliation file, joined as a delegate on behalf of his movement.

No results were announced regarding the outcome of the negotiations until now.

Egypt was the mediator that brokered the deal between the two main Palestinian movements in Cairo on 12 October. At that time, Hamas and Fatah signed an agreement at the Egyptian General Intelligence Directorate headquarters, agreeing to proceed with inter-factional meetings to plan presidential and legislative elections.

The negotiations came after Hamas announced in September dissolving its administrative committee in the Gaza strip, in order to end the escalation with Fatah, the movement with which President of the Palestinian Authority Mahmoud Abbas is affiliated. According to the agreement, Hamas would allow a reconciliation government to carry out its duties in the 360 sqm strip.