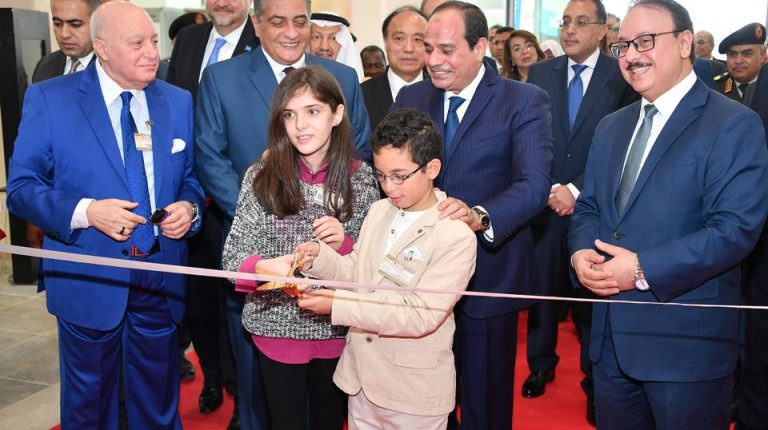 During the opening ceremony, Al-Sisi inaugurated the first phase of the technology park in Beni Suef via a conference call. The village stretches over 50 acres, including 16,000 sqm of buildings.

He also inaugurated a similar park in Sadat City, Menoufia, located on an area of 50 acres, with an equivalent 16,000 sqm of buildings so far. Moreover, Al-Sisi inaugurated the first stage of the technology park in New Assiut City, where the first ‘Made in Egypt’ mobile phone originated. The factory that manufactured the phone used expertise from Chinese experts that helped 500 Egyptian technicians and engineers, who were trained in China.

In his speech, Al-Sisi said that the information technology sector is a fundamental pillar of the state’s plan to move towards an integrated digital society.

He pointed out that today, Egyptian society is reaping the fruits of several initiatives launched in recent years in the communications and information technology field, in order to achieve a significant leap for Egyptians. “This is done through localising and settling technology in different governorates of Egypt, besides providing an environment that encourages capacity-building of youth and promotes the electronics industry and design fields,” he added.

Furthermore, Al-Sisi pointed out that the opening of an electronics factory in the Assiut Technology Park marks the first step on the way to develop the local production of electronic devices and export products bearing an Egyptian label.

He stressed that the launch of the Egyptian e-visa portal is the first phase of an integrated project for the development of technically-advanced mechanisms regarding passports, emigration, and nationality administration. This includes building databases and control systems that provide precise data analysis capability for all ports n Egypt.

“In context of the pivotal role of information and communication technology, the Egyptian government is establishing an agreement with the United Nations to launch a regional centre fostering technological innovation in Egypt, the first of its kind in Africa and the Middle East. The first phase will focus on providing innovative solutions to the challenges in the education, health, agriculture, and industrial sectors,” he said.

For his part, Minister of Communications and Information Technology Yasser El-Kady said that the support given by Al-Sisi to this sector reflects its importance as one of the anchors that can push the Egyptian economy forward.

He noted that 4G services were launched in Egypt in September, adding that Egypt is now preparing, through experiments and studies, to introduce 5G technology—potentially making it one of the first countries in the region to adopt it.

He added, “we are on the right track to achieve the strategic objectives of the sector derived from the Egypt 2030 vision, to achieve a balanced and diversified economy based on innovation and knowledge. We aim to achieve sustainable development and improve the quality of Egyptians’ lives through a package of initiatives launched during the last two years. And this strategy has positively reflected on the ICT sector’s contributions to Egypt’s economic growth.”

El-Kady further added that his ministry has inaugurated two technological parks in Beni Suef and Sadat City, both in Menoufia governorate, part of the presidential initiative to expand technological parks in different governorates. The parks are considered the main pillars for the development process in these governorates, based on creativity, innovation, and entrepreneurship. The smart parks additionally provide job and training opportunities through Egyptian and international companies.

In addition, the parks will include industrial complexes for manufacturing electronic products, the first of which was opened in the new technology park in Assiut. The minister said that the first locally manufactured mobile phone will be launched from Upper Egypt with 45% Egyptian components.

Moreover, El-Kady has launched the National E-Commerce Strategy, in cooperation with the United Nations, and pointed out that this step will contribute to developing e-commerce in Egypt, next to achieving sustainable development and strengthening the digital economy. He also expressed his gratitude to the ministries of trade, industry, and finance for their effective cooperation to support e-commerce activities.

Houlin Zhao, secretary general of the International Telecommunication Union (ITU), said that Egypt is an important strategic partner in the Middle East, noting that the union has a regional office as well as many projects in Egypt.

He added that the ITU has signed an agreement with the Egyptian government to establish a Smart Ground Water Management Project, as well as using information technology to make direct contributions to agricultural productivity and financial inclusion.