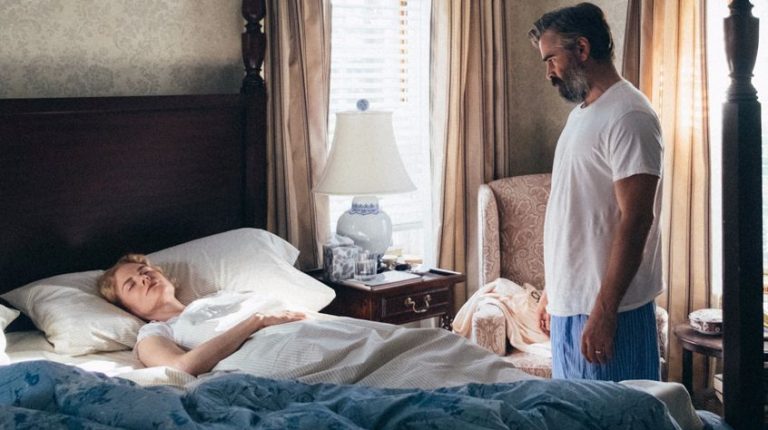 In his film Dogtooth (2009), Greek Director Yorgos Lanthimos used one lens for shooting, unknown actors, one location, and dropped using a soundtrack. A few years later, Lanthimos released his film The Lobster (2015), where he selected famous actors such as Colin Farrell and Léa Seydoux, more than one huge location, and a lot of soundtracks. Another difference between the two films is that Dogtooth takes place in a realistic world, while The Lobster occurs in a dystopian world, which the director writes its rules from the beginning.

This time, in his film The killing of the Sacred Deer (2017), Lanthimos also mixes the worlds of Dogtooth and The Lobster, as he asserts that using well-known actors was a commercial and important element in the process of making the film. He uses Colin Farrell, Nicole Kidman and Barry Keoghan to return to the real world. Yet he continues to use mysterious events that metaphysically explain this world, and uses music this time, but in an abstract way so he can find the right recipe to present his two worlds.

The film revolves around a skilled surgeon who lives calmly with his family, until a young man shows up to turn their lives upside down. This year, Lanthimos returns to engage with his favourite subjects: power, justice, and cruelty, among other themes. In Dogtooth, he tackled family authority, and in The Lobster he tackled societal authority. In The killing of the Sacred Deer, he clashes with the authority of knowledge and institutions, especially of medicine and doctors who only acknowledge medical reports.

In The Killing of the Sacred Deer, the main protagonist is a doctor named Stephen (Colin Farrell), married to Anna (Nicole Kidman), and they have two children; a young boy and a teenage girl. Stephen seems to be skilled in his profession: he is the diagnostician who deals with critical medical results, convinced that he can do no harm to anyone. Anna, the wife, also works in the medical field, and seems to agree very much with her husband.

She accompanies him to a medical conference where he is a main speaker. When they return home, she takes off her clothes and lies almost dead, so they can have sex, in what seems to be a kind of fantasy for both. The portrayal in this scene says a lot about Steven’s character who sees himself as a hunter attacking his surrendered prey with some sort of animal instinct.

Lanthimos opens his film with real-life footage from an open heart surgery removing a patient’s heart to save his life, an opening scene that is very expressive of what the film is about, and that heavily advances the progress of the plot.

As Martin, the son of one of Stephen’s former patients, shows up, the couple’s happy life becomes endangered. The true face of Stephen, his wife, and even their innocent children is unveiled, after hiding behind a false mask since the beginning of the film.

Despite its shocking nature and frustrating approach, The Killing of a Sacred Deer is one of this year’s best films. It gives us the same intense dose of emotions, reminding us of our love for cinema. It additionally proves that directors who are capable of creation and innovation exist, at a time when some might claim that there is nothing new to offer. Lanthimos’ topics and stories are not new to this world, but the ingenuity of Lanthimos lies in how he handles events inspired by stories from Greek mythology, where the director himself was born.

Topics: movie The killing of the Sacred Deer

The Hurt Locker: how to use film to create pro-war propaganda?