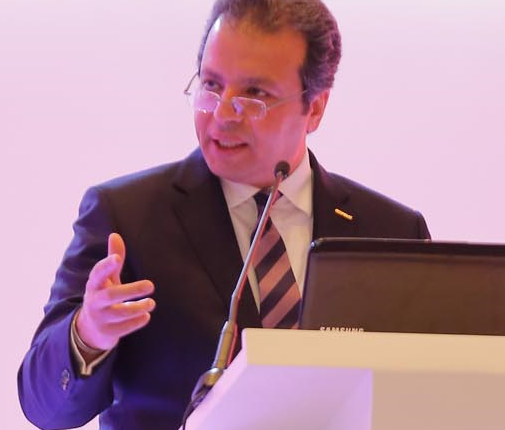 Oracle believes that new technologies, artificial intelligence (AI) being the most prominent among them, in addition to cloud computing, have imposed themselves on countries’ strategies in light of a new information revolution invading the world.

According to Daily News Egypt’s interview with Abdul Rahman Al Thehaiban, senior vice president of technology for the Middle East and Africa at Oracle, and Bassel Mubarak, country leader for Egypt at Oracle, the world is currently witnessing drastic changes in terms of the information revolution.

Where does technological development stand at the present time? And what is the extent to which the region’s markets could accommodate this development?

Al Thehaiban: Technological development is controlling the relation between companies and customers, which led to the appearance of startups that support the government and impose strategies that eventually provide jobs and create an attractive investment environment.

Uber and Careem are two of the most prominent startups that have supported the markets they are in. 40 years ago, there was a gap between high-growth and emerging markets, but technological developments have managed to bridge this gap.

Gulf markets, for example, are currently living in the post-petroleum era which led to imposing technology on most of their strategies. The decline in petroleum prices has contributed to relying on new technologies to limit spending on industries and trade.

All countries in the Middle East, including Egypt, are qualified and ready for the new information revolution and introducing AI programs into all of their activities.

AI programs are considered the most prominent technologies that I see as double-edged swords. However, they are highly required and good when used to develop services offered.

All markets in the Middle East are qualified for using AI programs, and the policies of countries will determine the implementation mechanisms.

I would like to note that AI programs will create new jobs.

Mubarak: The fears that have emerged from AI are normal, and this is actually what happened when machines were invented. At the time, scientists called for stopping the invention of machines because they would affect employment, however, it seems that the opposite has happened, and more jobs were created.

What role has Egypt played in the information technology industry during that past period?

Mubarak: The challenge that the local market recently faced was accommodating the shock of the exchange rate liberalisation, which led to reducing spending by nearly 50%.

2017 was a good year for Oracle in Egypt and the company is supporting government trends, especially the strategy to shift towards a digital economy.

What about the company’s strategy in the Egyptian market?

Mubarak: Oracle Egypt is focusing on many factors in its strategy, including the inclusion of global technologies in the Egyptian market and qualifying Egypt to accommodate them through supporting databases and launching the necessary applications for them, as well as providing services to customers easily and quickly.

Oracle’s strategy focuses on investing in the education and health sectors. The company holds agreements with government agencies to provide services in these sectors.

Currently, the local market is starting to pay attention to small and medium enterprises (SMEs), however, the private sector needs to play a larger role in this process. At the moment, the government, in addition to the communication and banking sectors, are the most prominent clients of the company in Egypt.

Oracle provides a program to support business leaders and small companies in the field of cloud computing. Spending in the field depends on the volume of use, which helps small projects grow.

Spending on IT develops, especially with the presence of major national projects in Egypt, such as the New Administrative Capital and the Suez Canal.

A report issued by the IDC showed that spending on IT in Egypt reached $1.8bn this year.

Currently, we have centres in Egypt that provide their services to nearly 60-70 countries. These services include technical support and technology solutions to avoid crises, in addition to cloud computing applications.

We are willing to support the Egyptian government with the suitable technological solutions that help achieve economic development, reduce costs, and support national projects through the latest technologies.

Oracle has also launched a centre to develop human resources in Egypt. It serves the entire region and helps provide the necessary training and qualification in the field for the local market, especially that the local market is growing rapidly in terms of the numbers of annual graduates in the field of engineering, IT, and computers.