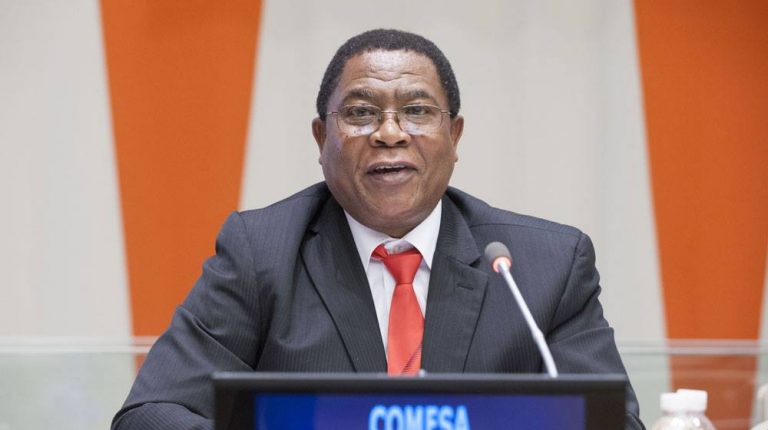 Common Market for Eastern and Southern Africa (COMESA) Secretary General Sindiso Ngwenya said, in an interview with Daily News Egypt, that the Egyptian initiative to establish logistical centres in a number of African countries is a laudable initiative.

Ngwenya added that the COMESA will be pursuing specific trade programmes in 2018 and these include the Digital Free Trade Area (DFTA), which is a comprehensive trade facilitation programme, for trade in services and small-scale cross-border trade.

Does COMESA have new programmes to support exports and promote trade exchange between the COMESA countries?

Yes. The COMESA Business Council (CBC) is a specialised agency of the Common Market for Eastern and Southern Africa that is representative of the private sector in the region. The CBC brings together the national chambers of commerce and trade promotion organisations in the COMESA region. Through the CBC, the private sector is informed about trade opportunities in other COMESA member states and is thus able to form business links.

In addition, COMESA is developing instruments for the implementation of the Digital Free Trade Area, which comprises e-commerce, e-legislation, and e-logistics. It will include an electronic certificate of origin, which will facilitate and expedite the export process.  Implementation of the DFTA will be done in phases, beginning in 2018.

There are other established institutions to support trade and investment in the COMESA. They include the Trade and Development Bank (formerly PTA Bank) which provides trade finance as well as project finance.  The COMESA Clearing House provides facilities for settling payments for intra-COMESA trade and services, without resorting to letters of credit. The African Trade Insurance Agency is another organisation that provides political and commercial risk cover for investments and exports, while PTA reinsurance company ZEP-RE provides reinsurance services.

How should trade exchange between COMESA countries be promoted?

COMESA attained free trade status in October 2000 with nine member states and this number has since risen to fifteen. The removal of tariffs for trade in products that comply with the COMESA Rules of Origin provides an advantage, which promotes trade and exchange of products between COMESA member states.  A crucial means of promoting trade exchange between COMESA countries would be through improving the availability of information on trade opportunities among the member states. It should be noted that in 2014, a study done by the secretariat on intra-COMESA trade potential identified the lack of information on trade opportunities as a key factor contributing to low intra-COMESA trade, which is currently below 10% of total trade. It is through robust and up-to-date market intelligence information that buyers and sellers in the COMESA region can be linked, given that the market is dynamic, with new firms entering and exiting.

COMESA member states hold annual international trade fairs, which provide an opportunity for companies to exhibit and market their products, and thus promote trade in the region. In addition, member states undertake trade missions where they identify market opportunities between themselves.

What are the problems hindering trade between those countries?

Does COMESA promote Egyptian exports in the region? What will be the volume of Egyptian imports from COMESA by the end of October 2017?

Does COMESA work with Egypt on programs to ensure export shipments to Africa? If yes, what are the procedures to ensure shipments?

The Trade and Development Bank (TDB) provides trade finance, in addition to the Africa Trade Insurance Agency (ATI), which is a pan-African institution providing robust risk solutions including credit insurance to companies, investors, and lenders interested in doing business in Africa. The ATI’s capital stock increased from $180.5m to $222.2m as of 30 June 2017 following the addition of Ethiopia, Ivory Coast, and Zimbabwe as new members and the increase of capital by Benin.

The TDB and ATI are reputable and indigenous institutions uniquely placed to serve both businesses and investors in the COMESA region and Africa at large.

Egypt plans to establish logistical centres in a number of African countries. Does COMESA support that?

Does COMESA cooperate with foreign financial institutions to provide support to member states and to increase trade?

In particular, the EU funded the Regional Integration Support Mechanism (RISM) programme implemented under the COMESA Adjustment Facility (CAF) framework, which is an instrument used for the effective delivery of aid for trade in the region. The programme supports member states in implementing their regional commitments through the disbursement of funds either through budget or project support.

What are COMESA’s programmes in 2018?

COMESA will be pursuing specific trade programmes in 2018 and these include the digital FTA, a comprehensive trade facilitation programme, trade in services, small-scale cross-border trade, in addition to supporting COMESA member states in the ongoing Tripartite Free Trade Area (TFTA) and Continental FTA (CFTA) negotiations.

What is the update regarding the Tripartite Free Trade Area (TFTA) that has been signed in Sharm El-Sheikh in June 2015?

The TFTA has three key pillars, namely market integration, industrial development, and infrastructure development. There has been progress registered under each pillar since the launch of the TFTA in Sharm El-Sheikh, Egypt, in June 2015. At the time of the launch, 15 member states signed the agreement and since then, six additional member states have signed the agreement, while Egypt and Uganda have ratified the agreement. It should be noted that 14 ratifications are needed before the agreement can enter into force.  However, negotiations are still ongoing on some outstanding issues, specifically the rules of origin and tariff liberalisation.

In the area of industrial development, the Tripartite Council of Ministers adopted a work programme for the industrial development pillar. The work programme identified priority actions required to improve the productivity and competitiveness in tripartite regional value chains and subsequently improving the enabling environment for the selected priority sectors in agroprocessing, chemicals, and minerals. In addition to this, studies have been undertaken on industrial statistics and agroprocessing value chains. The work under this pillar is critical as it will address the issues of the manufacturing sector, noting that a larger market of 680 million people will require high quality products.

On infrastructure development, the first meeting of the Tripartite Sectoral Ministerial Committee on Infrastructure was held on 26 October 2017, in Dar es Salaam, Tanzania. This meeting reviewed the progress of projects and took policy decisions that will give impetus to the infrastructure pillar, in particular, an infrastructure work programme and a strategy for sustainable funding of infrastructure programmes are to be developed. In addition, the Tripartite Transport and Transit Facilitation Programme funded by the European Union was launched and will address the lack of an integrated and liberalised road transport market through the implementation of harmonised road transport policies, laws, regulations, systems, and standards that affect drivers, loads, vehicles, and road infrastructure in the countries of the eastern and southern African regions.

The TFTA is now focused on the next steps which will see member/partner states embarking on Phase II negotiations, which will cover trade in services, intellectual property rights, competition policy, cross-border investment and cooperation in trade and development. Another critical issue is the implementation of the programme, which is now a key priority for the member/partner states. Now is the time to implement and operationalise the TFTA that was launched in 2015.