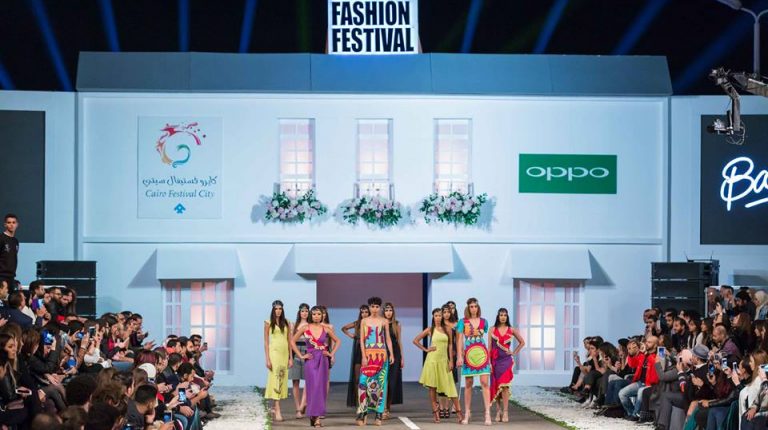 As more days get crossed off the year’s calendar, those currently known as the Cairo Fashion Festival (CFF) crowd worked on their outfits for the anticipated date. From the country’s most renowned fashion designers, to those with an army of loyal followers, hundreds marched on the green carpet under the fading sun of late November.

For the ninth season, CFF came back with a new layout, sizzling fashion, and fresh talents to celebrate the Fashion Week (FW) season. This season, the festivities unfolded over an entire weekend, starting with a local shopping bazaar then a number of fashion talks powered by the industry’s leaders before the great finale.

The biannual fiesta proved to be the country’s biggest fashion event with five presentations plus four runway shows, which took place on the festival’s longest runway to date. From those who have trusted CFF to be their launchpad a few seasons ago, to those who met Cairo’s fashion enthusiasts for the first time, it is safe to say that the event had a little something for every taste.

While the early sunset led to a long and chilly night, the first model took the stairs to walk on a fashion-forward modified container. The industrial platform was this season’s designated location for fashion presentations. First in line, Ola Azzam’s evening dresses answered many puzzling dress codes with flirty silhouettes and satin-fuelled grace. The multiple high and low hemlines, paired with hints of lace, made the collection both fresh and timeless.

Next in line, Dubai’s Three Fifty Nine had their spot inside the container. The brand’s signature vibrant colours and geometric patterns stood out against the surrounding white backdrop. The label’s modern aesthetic and carefree flair attracted the attention of many bold and contemporary women in the crowd.

The container later witnessed the work of Sara Shenawy and Heritage collection by Ahmed Hamdy. While Shenawy addressed the ladies, Hamdy favoured his own kind. For the new season, the precious sapphire stone has a significant impact on Shenawy’s thought process. The designer’s collection was inspired by the gem’s transparency and rich colour. Accordingly, her evening gowns came in a rainbow of emerald green, ruby red, and without question, sapphire blue.

The simple yet memorable collection got Shenawy to walk one more time inside the container; albeit the second round was only to pick up her gigantic ticket as the winner of this year’s fashion grant provided by London College of Fashion.

On the other hand, the gentlemen had an appointment with a fashion-forward blast from the past. Menswear designer Ahmed Hamdy chose to base his design on what he defined as the golden era of tailoring in Egypt: the 1930s.

“In the year 1925, Cairo was named the most beautiful city in the world. One of the main criteria for this award was the way people dressed,” Hamdy added. “Accordingly, I was inspired to use the best-selling fabrics from that decade; wool, cashmere, and velvet. Meanwhile, I have followed a more modern cut while maintaining nostalgic reveres.”

With that said, nothing was as intriguing as the Oppo fashion presentation competition. The presentation featured the work of many talented designers, including Malak El-Ezzawy, Ahmed Hamdy, Randa Torky, Christina Leon, and Eva Habashi. According to the brand’s guidelines, the designers would bond to use the Oppo colours as well as intertwine the new phone. The container witnessed creations as diverse as a men’s suit with a transparent breast pocket, a duo-coloured coat—half green and half white—and an evening gown worthy of a night on the dance floor.

As for the runway shows, they were a whole new ball game. Bardees Ahmed came back for a second season with CFF. Inspired by Egypt’s popular heritage, the ready-to-wear designer took florals from a spring cliché to a locally-flavoured dress code.

“Spring Fiesta is a colourful celebration of the season. It is a happy collection based on spring’s colours, flowers, and movement,” Ahmed said.

Her petals blossomed on denim outfits and summer dresses; meanwhile, she clashed and matched statement patterns to formally welcome the upcoming heat waves.

On the contrary, Maison SG by Sara Gabr focused on the current FW18 season, as well as her synchronised army of women. Her over-sized power blazers bounced supremacy with the ripped denim shirts. Further to this, the short hemlines reflected the collection’s overall confident allure.

“The Crystalline Rain was based on the manipulation of dark shapes against neutral colours,” Gabr said, adding, “rain is a unique element and each outfit is inspired by the need to standout. Each piece could be styled in many different ways in order for it to become one with the woman wearing it.”

Unlike what the name might suggest, Diva Couture is anything-but unattainable. The home-grown brand aimed to partner up with the ladies that plan to have a prosperous holiday season without (what used to be) unavoidable hustle. The FW18 collection aims to make dreamy and practical synonyms. Through matching exaggerated shoulders with flowing skirts and detailed-lace bodices with high and low satin skirts, Diva Couture created a haven for modern women.

“Haute couture does not necessarily have to restrain women; they should be able to move and have a good time while looking their best. This fall and winter collection is an opportunity to prove that femininity and practicality can come hand in hand,” said the founder, Mona Salim.

Mary Theotoky came all the way from Greece to put on a white finale for the busy schedule. The bridal designer sent down the runway a number of gowns, which were designed to appeal to every taste. From mermaid cuts, to those inspired by fairy tales, the gravel runway saw the dainty and the heavily extravagant. Furthermore, the Greek designer also added a dose of colour via a number of slick evening gowns.

Sort: Changing formal wear one sock at a time