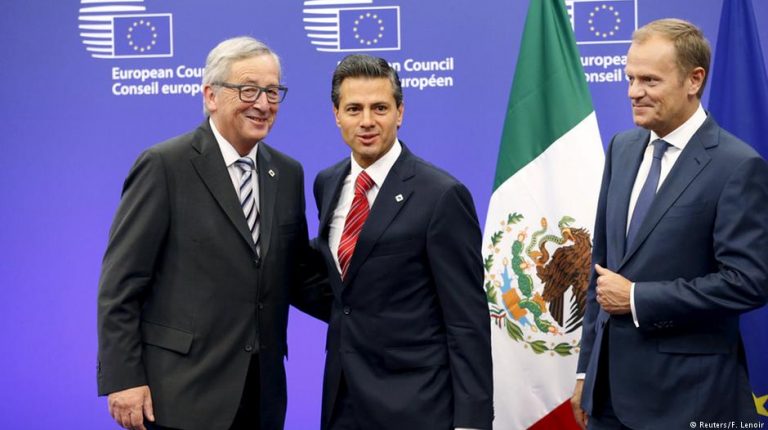 The EU and Mexico have had a free trade agreement for 17 years, but have been negotiating a new one for the past 18 months. Following the most recent round of talks, hopes are high that a deal can be concluded next week.The EU and Mexico hope to conclude a new trade agreement by the end of the year, following another round of negotiations in Mexico City over the past week.

Mexico has had a free trade agreement with the EU since 2000, but has been negotiating an updated version with the bloc since May 2016, focusing on various aspects of modernization of the current agreement.

The most recent talks — the sixth round — focused on issues related to market access, competition policy and intellectual property.

Following the conclusion of that round on December 5, the Mexican economy ministry, headed by Ildefonso Guajardo Villarreal, said that at the next round of talks in Brussels on December 11, there are hopes to “outline a possible conclusion of negotiations.”

Ahead of that meeting next week, a number of video conference calls will take place between the main negotiators to further refine the discussions.

Concern over the future of NAFTA

With a Mexican general election scheduled for July 2018, there is an added incentive on the Mexican side to conclude the negotiations by the end of the year.

The seemingly serene progress of the talks contrasts significantly with the tense state of the ongoing North American Free Trade Agreement (NAFTA) negotiations.

Canada, Mexico and the US are currently in talks about updating various aspects of that 1994 deal, with US President Donald Trump having repeatedly attacked it over the past two years, calling it “the worst trade deal, maybe ever signed anywhere.”

The Mexican economy is heavily dependent on trade with the US, which accounts for 81 percent of Mexican exports and 47 percent of imports, according to the Massachusetts Institute of Technology’s Observatory of Economic Complexity.

The continuing uncertainty over NAFTA has led the Mexican government to prioritize the development of its trading relationship with other partners, such as the EU.

“Modernizing the EU-Mexico Free Trade Agreement is a priority in Mexico’s trade agenda seeking to strengthen our integration with existing trade partners and diversify our economic relations around the world,” the economy ministry said.

Mexican-EU trade has grown significantly since the 2000 deal but remains miniscule in comparison with the volume of trade the Latin American country conducts with the US and China.

Mexico exported just 5.4 percent of goods to Europe in 2016, the vast majority of it to EU countries. It terms of Mexican imports, 12 percent came from Europe last year.

The EU also expressed hopes that negotiations could be concluded by the end of 2017.

“During the sixth round, both delegations came to an agreement on all the political and cooperation issues not related to the ongoing trade and investment negotiations,” the EU delegation to Mexico said in a statement.

“The conclusion of these areas of the new agreement reaffirms the commitment of both parties to finalize negotiations overall by the end of this year.”