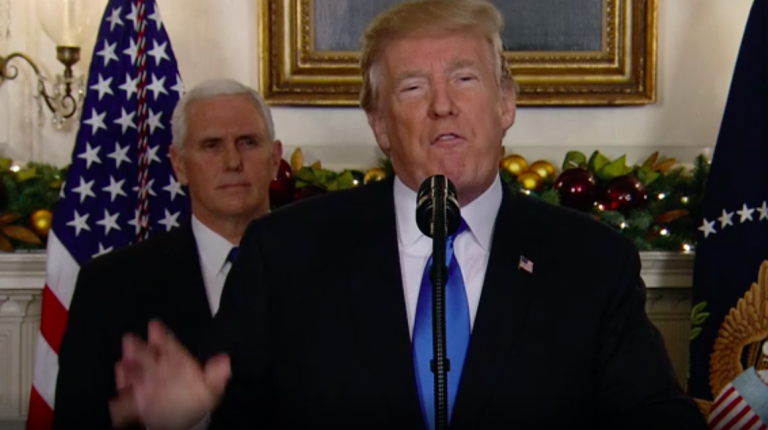 US President Donald Trump declared his country’s recognition of Jerusalem as Israel’s capital for the first time in history. “I have determined that it is time to officially recognise Jerusalem as the capital of Israel,” he said in a televised speech on Wednesday.

Moreover, Trump said he directed the State Department to begin preparations to move the US embassy from Tel Aviv to Jerusalem.

“Today, we finally acknowledge the obvious, that Jerusalem is Israel’s capital,” Trump stated, describing the unprecedented move as the “recognition of reality and the right thing to do.”

The US president said the announcement marks “the beginning of a new approach” to the conflict between Palestinians and Israelis, saying that delaying the recognition for “two decades” did not advance peace negotiations and that problems cannot be solved by repeating failed strategies of the past.

He added that the US remains “deeply committed” to facilitate a peace agreement acceptable to both sides.

Despite warnings received from Arab and world leaders, Trump said during a cabinet meeting at the White House prior to the announcement that the move was “long overdue,” according to media reports.

Protests broke out in the Gaza Strip ahead of the expected announcement. Demonstrators burned pictures of Trump, as well as American and Israeli flags.

Hamas said on its website Wednesday that Palestinian factions organised a demonstration against what they considered an “American invasion of Jerusalem.”

Additionally, the movement stressed the necessity to speed up the reconciliation process between the factions to stand strong in this confrontation.

At least 10 Palestinians were detained, including Fatah’s secretary general in Jerusalem, after clashes broke out between protesters and Israeli forces, Palestinian news agency WAFA reported.

An emergency meeting of Arab foreign ministers is scheduled to take place on Saturday, based on a Palestinian request.

EU High Representative Federica Mogherini issued a statement warning of the consequences and repercussions such a decision can have on much of the world’s public opinion.

Saudi King Salman bin Abdulaziz told Trump in a phone call on Tuesday that “such a dangerous step is likely to inflame the passions of Muslims around the world due to the great status of Jerusalem and the Al-Aqsa Mosque,” according to Sky News Arabia.

Egypt and Jordan had advised against the move, as Turkey warned it would cut ties with Israel.