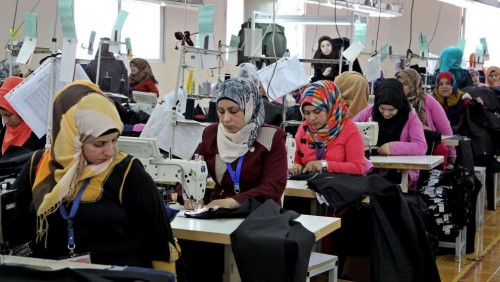 According to a report released by Egypt’s Central Administration for Mobilisation and Statistics (CAPMAS) in April 2016, women account for approximately 22.5-23.5% of the local labour market compared to 46% in the UK, 47% in Russia, and 50% in South Korea, as examples.

Even though the portion of women in the active workforce has slightly improved since its 19% low in 2011, these are still shocking figures, particularly given that women constitute 49% of the overall population.

The picture might still become a little bit brighter if we were to add the informal sector with its high female participation. These, however, are mostly jobs with low productivity and an even lower wage.

One should not necessarily be concerned here with the reasons that lead to this awkward, and indeed, unacceptable situation—notwithstanding their importance, of course—but rather focus on its impact on the Egyptian economy as a whole and the tremendous loss of productive capacities which, if properly utilised, may generate considerable revenues, hence effectively contributing to leading the country out of its current crisis that has by now reached frightening dimensions.

As a matter of fact, the scene becomes even bleaker if we realise that Egypt’s average monthly per capita income amounts to about $165 (equalling approximately EGP 3,000) and that the unemployment ratio amongst women officially registered in the labour market is 23.6%, i.e. slightly more than 1,650,000 women with the actual figure probably being much higher. Hypothetically, this means that if we were to assume that half of those women are actually unemployable, there still would be a wasted capacity of no less than 6,600,000 working hours (based on an 8-hour working day) or EGP 112,200,000 per day (based on an average hourly wage of EGP 17.00). As a total, that would be around EGP 41bn per year. Given that the portion of women on the labour market barely reaches 50% of international standards, we may rightly double that figure once more, therewith exceeding EGP 80bn, which would account for roughly 2% of the gross domestic product estimated for the fiscal year 2017/2018.

However, all of these figures, as disastrous as they are, still do not reflect the actual magnitude of the problem, given that the government’s economic policy lacks any kind of vision, programs, or mechanisms that could promote the employment of women. One mechanism can be allocating a minimum of funds out of those made available to SMEs, which is a tendency strongly supported by the state, to projects conducted by women, or linking such financing to a certain minimum percentage of women employed in the respective business. On the micro level, that would be difficult to accomplish, but very much doable with SMEs that are recognised by the CBE as companies which may operate with a working capital of millions of pounds.

It would moreover be possible to intensify training programs qualifying women for the labour market and increase their ability to compete with men who are usually favoured over females in employment due to the conservative approaches of Egyptian society, which probably also requires improving public awareness pertaining to the importance of employing women, first and foremost in the middle class that is still very suspicious of the issue of working women.

The prime condition for all this is will remain political resolve, though, which is something that is not visible anywhere right now.

It should also be noted that the terrible situation of women in the Egyptian labour market does not only cause losses that can be measured in direct monetary terms but also leads to depriving Egypt’s economy of a potential for versatility and horizontal expansion. Such expansion can be achieved by adding activities that particularly benefit from females, such as the textiles industry, to name just one. Working women should, of course, not be stereotyped, but this field is indeed an area where Egypt should, in theory, be a major stakeholder while the truth is that today other countries—especially Turkey—have exceeded us by lightyears.

The key then is that we need to make some serious efforts to seek the added value that could be generated by increasing female employment on all levels, hence, additionally creating a more balanced social structure through providing gender equality in the workplace.