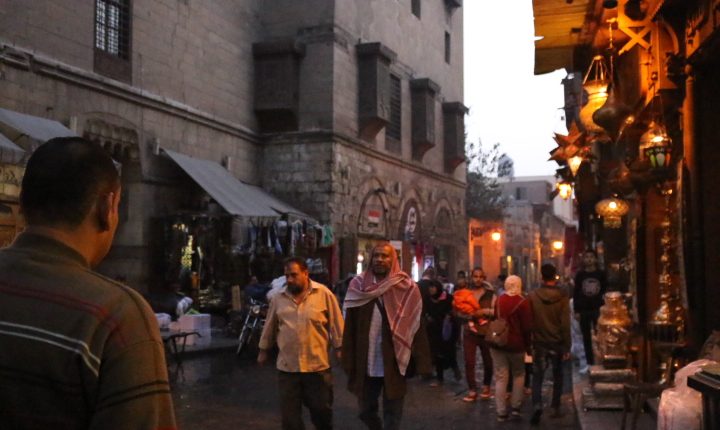 is one of the oldest streets in the city, approximately one kilometre long. A United Nations study found it to have the greatest concentration of medieval architectural treasures in the Islamic world. The street is named after Al-Mu’izz li-Din Allah, the fourth caliph of the Fatimid dynasty.

In the past it was known as Bein El Qasrein after two castles built by Jouhar al-Saqli. One was on the eastern side that was for caliph Al-Mu’izz, known as “the Great Eastern Palace” and

the other was on the western side, built for Aziz Ibn Nizar Ibn Al Mu’izz, and is known as “the Small Western Palace”.

This was until Salah El-Din Al-Ayyubi came and took the Grand Palace as the seat of his state until another castle was built on Mount Mokattam. Since then, the Grand Palace has been neglected. Today, it is replaced by the Dome of King Salih Najm al-Din Ayyub and a number of Fatimid schools. Meanwhile, the site of the small palace is today occupied by the Mosque of Hussein and the famous Khan Al-Khalili market.

To enjoy visiting Al Mu’izz Street, there are few things to know before going there.

It is a historical site so it is hard to find a place to buy water there, so people have to bring bottles of water with them.

The street alleys are left as they were originally built in the past, so the streets are not very comfortable to walk on. It is preferable for people to wear sports shoes to overcome this problem and not feel uncomfortable.

The street itself is never closed, yet it is hard to get inside after 11 p.m. However, the most important part of it are the museums inside, which close at 5 p.m.

Night time at the street is mesmerising due to the lights used as part of the place’s decoration. A ticket costs EGP 3 for students and EGP 5 for everyone else.

The best places to start a tour in the street are those that people rarely know about.

This bath was a hot bath that was built for Sultan Inal. It gets its hot water from industrial kitchens for cooking beans. That is due to the long time beans take in order to be cooked, 12-14 hours, so these kitchens are always hot. The water pipes were set in the kitchens in order to heat the water using the place’s continuous hight temperatures.

The place is locally named by “elly akhtasho mato” due to a famous incident that took place in it.

“Elly akhtasho mato” translates to English as “people who are shy, die”. It is an Egyptian idiom that is used to describe that people who are still apprehensive die.

The story behind this famous quote tells that the Inal bath, which later became a public bath for women, witnessed a fire in 1889. With no access to their clothes, women had no option but to get out of the bath naked in public. Women who came out naked survived, but those who were shy or had fear of being seen naked eventually got stuck and died in the fire.

The second place to visit is “el zouk mkhragsh mn masr”, which translates to “the good manners did not leave Egypt”.

This is an Egyptian idiom, but in fact this idiom is not about good manners, but is about a man whose name is El Zouk (the manners).

He was a man trying to help people to live in peace and not to fight, but he got tired of Egyptians and the non-stop fights occurring among them. So he decided to leave Egypt because of the bad manners of people in that time, but on his way out, he died at one of Al Mu’izz Street’s gates.

His grave is actually the first thing people witness on their way to Al Mu’izz Street from Al-Futuh Gate.

The third less famous place in Al Mu’izz Street is the Mosque of Sulayman Agha Al-Silahdar.

Mosque and Sabil of Sulayman Agha al-Silahdar is a complex that includes a mosque, a place to get water for free, and a school, established during the era of Muhammad Ali Pasha in Islamic Cairo, who established the historic medieval district of the city.

It is located at the beginning of Burjouan Alley of the famed Al Mu’izz Street.

In the past, people had to buy water, so richer people offered to build a free drinking water taps, as a sort of charity. These taps were available at all times for people to drink and get as much water as they need for their houses.

In order to do so, they built a cistern inside the complex, which can be filled with up to 2.5 million litres.

This well pours into four rooms, each one with architectural decorations on their walls, built to purify the water from dirt.

In Pictures: Egyptians ask for intercession on Mulid Al-Hussein