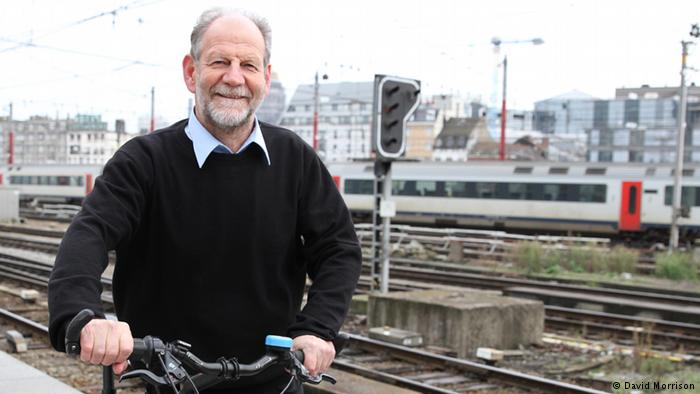 Germany’s long-awaited high-speed rail link between Berlin and Munich has finally been inaugurated. But Green MEP Michael Cramer says it’s not enough to lure most travelers away from carbon-heavy road and air travel.On Friday, German politicians celebrated the opening of a long-awaited high-speed train line between Munich and Berlin. The 632-kilometer (392-mile) ride will shave two hours off current journey times, raising hopes that fewer people will opt to fly between two of Germany’s biggest cities.

But despite the project’s €10-billion price-tag, train tickets will still cost more than a budget flight. We asked Michael Cramer, a transport expert for the German Green party in Germany and member of the European Parliament whether high-speed trains are a solution to cut carbon emissions from air and road transport.

DW: With the new train connection between two of Germany’s biggest cities, Deutsche Bahn wants to compete with low-cost airlines. Given that tickets may total around €130 to €150 per journey — considerably more than a low cost flight — is this realistic?

Michael Cramer: There are some people, especially from business, who will now be using the train instead of a flight, because in time there is nearly no difference and you can work on a train in a better way. For tourists looking for low-cost carriers, there will not be a big advantage, because they are looking at the price and not the time.

So, do you think business people will benefit more than the wider public?

Yes. In fact, also for other people who like the railway. That is an advantage, because the time from Berlin to Munich will be reduced by two hours; instead of six hours you will be there in four. Of course the price plays a role. But the [number of] passengers will be doubled in the future — that is the expectation of Deutsche Bahn.

So what can governments do to incentivize train travel over short-haul flights?

We have a problem in Germany: We have been working now for 25 years with a lot of money for this track. But we have in Germany a lot of tracks which are not, for example, electrified.

Between Berlin and Wroclaw in Poland, there is a gap of 50 kilometers which is not electrified. Therefore we need five hours between cities that should be two-and-a-half [hours apart], because the locomotives have to be changed twice. Only 5 percent of passengers on the railways are on high-speed trains. Even by 1906, Germany wanted the entire network to be electrified.

Today, after more than 100 years, we are only on 60 percent. In Switzerland they have 100 percent. So concentrating only on the high speed trains is not the right way because we have other solutions. In Germany, they are not thinking and not acting. So not, “as fast as possible,” we must think “as fast as necessary.” And not from main station to main station — but from house to house.

Is it up to the public to opt for more environmentally friendly transport, such as trains, even though it costs more and may take more time? Or is it the government’s responsibility to provide a better service?

Of course it is the government that is responsible. But the railway companies are following the government and they both are going in the wrong direction. I can tell you in the new transport plan in Germany we have 800 road projects and 27 projects on rail. That says everything.

In Europe we have unfair competition. For example, each locomotive has to pay a toll on each kilometer of track. On the road, it is the free will of the [European Union] member states if they have a toll. And then in Germany, it is only on highways and some other roads for trucks more than 7.5 tons.

So how can how can Europe get on board with low cost rail travel so that it’s competitive with low-cost flights?

With low-cost carriers we have a big problem because they are saving taxes. They are not paying the normal wage on pilots. That is all a problem because, for example, in Ryanair only one third of the pilots are employees of Ryanair. The others are self-employed. So [the airline] saves taxes. They save insurance money, and therefore they can offer a low price.

And that is not fair. We need a fair competition — then we can save mobility and the climate, but also the social issues.

Do you think you’ll be using the new high speed train between Berlin and Munich any time soon?

Of course, I will use it because I [already] used the train from Berlin to Munich. But I know, for example, that Jena [a city between Berlin and Munich] is not on the track. And that is a problem because lots of cities, big cities in Germany, have no connection.

We can’t think only of the two or three big cities in Germany. We have to look at infrastructure of the whole country. That is very important — and there we have to change it.

Michael Cramer has been a member of the European Parliament since 2004. He sits on the German Green party’s Committee on Transport and Tourism.

The interview was conducted by Ajit Niranjan and has been edited and condensed for clarity.