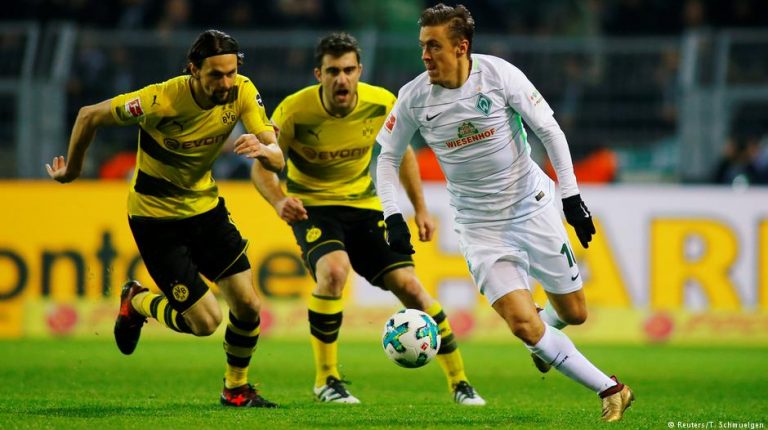 Four games into his interim tenure as Werder Bremen head coach, the similarities between Florian Kohfeldt and his predecessor Alexander Nouri are clear to see. The real difference maker though, is Max Kruse.With Borussia Dortmund in ‘crisis mode’ and Peter Bosz imploding like a bad Looney Tunes ACME Co. rocket, it would be easy to overlook not just how impressive Werder Bremen’s 2-1 win over BVB was, but also its implication in their bid to turn their form around for a second season running.

It was Werder youth coach Nouri who took over at the helm when Kohfeldt was let go by the club as part of Viktor Skripnik’s coaching set-up back in September 2016. Bremen went on to pick up seven points from a possible 12 in Nouri’s first four games. Kohfeldt has gone one better as the 2-0 defeat to Leipzig on Matchday 13 remains the only blemish on an otherwise perfect record, which now includes the scalp of Dortmund.

While Kohfeldt is being given until the winter break to prove himself, it took Nouri just three games to lock down the head coaching role on a full-time basis. Bremen’s form was hit-and-miss at the start at the start of his tenure, but a run of 11 games without defeat ultimately saw Bremen transform from relegation candidates to top six contenders.

This season they’ve been nowhere near as irresistible going forward, but like in the previous campaign, it is Max Kruse making all the difference. The real question is whether they can sustain a similar transformation this time around.

It comes as no surprise that the aforementioned 11-game unbeaten streak coincided with a purple patch that saw Kruse have a hand in 16 goals – nine scored, seven set-up – in the final nine games of the season.

Werder didn’t quite crack the European qualification spots, but their form lent itself to pre-season expectations that revolved around pushing for a top-half-of-the-table finish.

After a torrid start to the current campaign Bremen’s problems were compounded by, but not solely inspired by, Kruse’s goal drought. Much like life under Nouri at the start, a change in personnel appears to have breathed new life into Bremen and their star striker.

Not only has Kruse had a hand in seven goals in his last four games, those are the only seven goals Bremen have scored in that timespan. The 29-year-old didn’t get his name on the scoresheet against Dortmund, instead he played the decisive passes that saw Maximilian Eggestein and Theodor Gebre Selassie fire the Green-Whites to victory.

Lest we forget, Kruse has an added source of motivation knowing that he hasn’t completely dropped off the national team radar as FIFA’s summer showpiece looms large on the horizon. Should he be able to maintain this type of form, whilst steering clear of injuries, Joachim Löw will be hard pressed to turn a blind eye.

For the time being though, there’s no getting away from the fact that the Reinbek-native’s form will be a critical factor in Bremen surviving this season, irrespective of whether the club stick by Kohfeldt or are tempted by the services of someone like Peter Stöger.

While we’ve seen him produce mesmerizing moments in fits and spurts, consistency will be the key to both Werder and Kruse reaching their targets come the campaign’s conclusion.