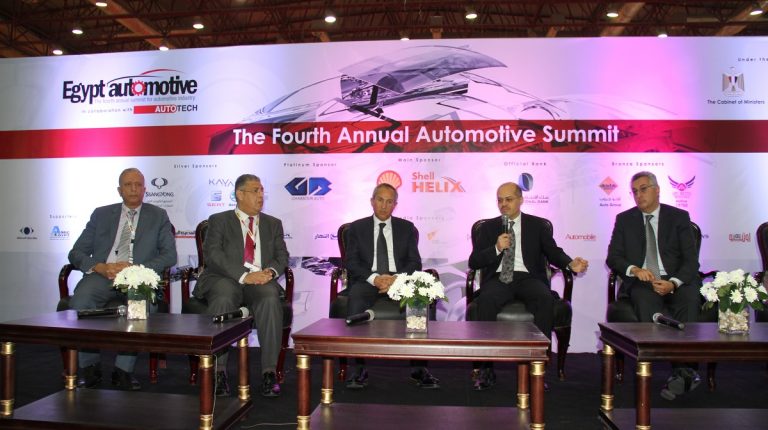 Egypt’s automotive sector appears to be on track to revival after years of instability, as the industry strategy, which is set to be approved in weeks, is expected to lure fresh investments to the sector, market experts and auto manufacturers said on the sidelines of the fourth Egypt Automotive conference.

The auto sector is an important contributor to the Egyptian economy, representing around 3.7% of Egyptian manufacturing output and 1.8% of manufacturing employment annually, according to a recent report issued by Research and Markets.

According to the report, in terms of revenue, the domestic automotive sector generated $3.5bn in 2014.

Saher Hashem, managing director of Shell Egypt, said that the summit is a chance to exchange experiences and views between the car industry companies’ representatives.

“As Shell is considered a partner in the industry, it now seeks to diversify the sources of profitability in order to restore the market’s strength,” he added.

During the opening speech of the summit, Raouf Ghabbour, chairperson of the board of directors of GB Ghabbour Auto, said that promoting the car industry in Egypt needs a mutual desire from the government and investors.

Meanwhile, he added that supporting this industry would result in growth rates for the auto sector that stand at 10% annually.

Moreover, he explained that these development rates will increase citizens’ purchase power, which will result in widening Egypt’s car market, and increasing competitiveness capabilities.

On the other hand, Ghabbour added that Egypt needs to make a shift, turning to industrialise the country in all fields, not only in the car industry.

Moreover, Ghabbour called on the government to finish the car industry investment strategy, as this strategy will play a great role in supporting the local factories in continuing their productivity.

Furthermore, he added that Egypt’s car industry suffers from a main problem which is an economic problem that is based on polices, including subsidies, which started in 1960s.

In this context, Ghabbour explained that Egypt has to first create an investment strategy, referring to the Morocco experiment with Renault.

Moreover, he pointed out that GB Ghabbour Auto did not launch any new projects for three years because it is waiting for a clear investment strategy.

Meanwhile, Ghabour explained that the clear investment strategy will support investors as not to shift their investments from Egypt to another country.

Moreover, he pointed out that the zone has many advantages, including the investment law that was issued recently.

Another advantage is that the production inputs, as well as the exports are not subjected to any kind of taxes or customs.

In this context, he added that Suez Canal economic zone can be considered as a free trade zone.

“Despite the fact that Morocco lacks the mentioned advantages that we offer in Egypt, it succeeded in attracting three car factories. Moreover, it targets attracting a fourth factory,” he said.

Moreover, he added that Egypt targets dealing with investors who export to Europe or those who have a potential to deal with African markets.

Meanwhile, he added that it aims at gradually creating the Singaporean model in eastern Port Said.

“Egypt needs a clear strategy to keep investments of the current companies that work in Egypt and its investors,” he added.

Moreover, he added that the government has to overcome the current obstacles that the industry faces.

On the other hand, Hussein Mostafa, chairperson of a car manufacturers union, said that the main role of his union is to support factory development and progress, but it has to cooperate with the governmental associations in order to consult them, especially in the supplier industries field and input industries.

“Car industries cannot be developed unless the governments create a strong local market,” he explained.

On the other hand, Mostafa expects that Egypt’s dollar revenues will return to strength.

Moreover, he expects that the second half of 2018 will witness the return of solid tourism revenues and gas exports.

Meanwhile, Mostafa hopes for the Egyptian pound to regain some of its power, which will result in decreasing the prices of the industry’s inputs, driving down final product prices.

Moreover, he added that all international security and safety standards must be applied, as Egypt applies only 10 standards out of 46.

Meanwhile, he added that customers’ purchase power retreated as a result of the negative temporary impact of the economic reform programme, followed by a hike in prices.

For his part, Ahmed Abd El Razek, chairperson of the General Authority for Industry Development (IDA) said that Egypt has to review the car market’s status nowadays.

“Egypt’s market is narrow, thus we have to look forward to widen the market, especially in the suppliers industry field.

Moreover, Egypt has to look forward to international markets’ requirements.

On the other hand, he explained that international markets are now looking forward to shifting to the use of electric cars, adding that the authority found that the differences between fuel cars and electric ones are limited to four differences in the car’s inputs, while the rest of the inputs are similar.

For his part, Shady Rashad, business development director at Industrial Engineering Company (INDE), said that the number of exported cars is 1,000 annually.

“This number is considered low as the Egyptian car industry has been available in the international market for 20 years, so Egypt has to review the exported car numbers annually in order to achieve competitiveness,” Rashad continued.

Furthermore, he added that the value of total exported African cars amounted to $11bn, noting that Egypt’s share reached about $450m.

Moreover, he revealed that the customs imposed on importing the cars’ inputs is not stimulating for the investors.

In this context, Rashad added that the government has to review the customs and taxes law.

Egypt possesses one of the few domestic auto production capacities in the MENA region and is the largest auto producer in North Africa.

Today, there are 16 businesses with 26 assembly lines that manufacture 325,000 passenger cars, commercial vehicles, trucks, and buses. To support the sector, there are over 259 factories that supply 70% of all component parts.

Exports of engineering industries aimed to increase to $30bn: Aboufreikha