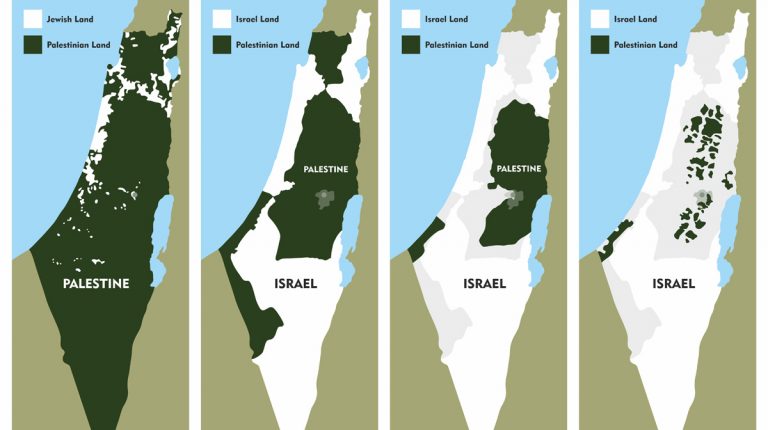 “Recognition of reality” was the justification US President Donald Trump claimed on 6 December as he announced his country’s historic recognition of Jerusalem as the capital of Israel, accompanied by a decision to begin preparations to move the US embassy from Tel Aviv to the holy city, being the only country to do so.

In response, Palestinian President Mahmoud Abbas said, “US President Trump’s decision tonight will not change the reality of the city of Jerusalem, nor will it give any legitimacy to Israel in this regard, because it is an Arab Christian and Muslim city, the capital of the eternal state of Palestine.”

European countries, including France, Germany, the UK, Sweden, and Italy did not see Trump’s reality either, as they denounced the decision and called it “unilateral.”

The move revived the decried Balfour Declaration of 1917, which marked the first recognition of a Jewish home in Palestine. Moreover, Palestinians and Arabs refused to consider Jerusalem as anything but the occupied capital of Palestine.

1947: UN partitions Palestine into an Arab and Jewish state

14 May 1948: UK relinquishes its mandate over Palestine and disengages its forces

According to a Friday statement by Al-Azhar, Al-Tayeb asserted that he would not sit with “those who are falsifying history, robbing peoples of their rights, and assaulting their sacredness.”

Al-Tayeb described the decision using the common Arabic expression given to the Balfour declaration: “the promise of who doesn’t own, to those who don’t deserve.”

Stating that he must immediately retrieve a solution, Al-Tayeb held Trump responsible for fuelling hate within the Muslim world and wasting democratic principles, as well as justice and peace values.

“Such hate that Al-Azhar has been working hard on eliminating and spreading tolerance instead, specifically towards the American people,” read the statement.

On Friday, a protest erupted from Al-Azhar mosque, as Al-Tayeb expressed support for the Palestinian people’s “third intifada”.

For his part, Reverend Andrea Zaki, president of the Protestant Churches of Egypt, said that reality is that “Jerusalem is an occupied land which must be returned to the Palestinians, no matter how much time passes,” state-media reported on Friday.

Zaki added that Trump’s announcement violated the UN charter and could not change the fact that Jerusalem is an Arab, Palestinian, occupied land and one of the rights of the Palestinian people.

Resolution 50 (1948) called for protection of the Holy Places and the city of Jerusalem, “including access to all shrines and sanctuaries for the purpose of worship.”

Resolution 54 (1948) ordered an immediate, unconditional ceasefire in Jerusalem, instructing its demilitarisation “without prejudice to the future political status of the city.”

Resolution 35/207 (1980) rejected Israel’s decision to annex Jerusalem and declare it its capital, considering “all these measures and their consequences null and void.”

Resolution 28/22 (2003) reiterated “its determination that any actions taken by Israel to impose its laws, jurisdiction and administration on the Holy City of Jerusalem are illegal and therefore null and void and have no validity whatsoever.”

Resolution 62/108 (2007) noted that that the International Court of Justice concluded that “the Israeli settlements in the Occupied Palestinian Territory (including East Jerusalem) have been established in breach of international law.”

Resolution 65/179 (2011) stressed that the wall and settlements being constructed by Israel in “Occupied Palestinian Territory, including in and around East Jerusalem” violate international law and deprive the Palestinian people of their natural resources.

Resolution 2334 (2016) condemned the construction and expansion of Israeli settlements, confiscation of Palestinian lands, demolition of homes, displacement of civilians as “measures aimed at altering demographic composition of Palestinian Territory occupied since 1967.”

UNESCO document 200 EX/25 (2016) on occupied Palestine “deeply deplored the failure of Israel, the occupying power to cease the persistent excavations in East Jerusalem and around the Old City.” It also strongly condemned escalating Israeli aggressions against Muslims’ freedom of worship and access to the Holy Site.

Reality of Israel’s assaults on Al-Aqsa

Storming the mosque and its compound, assaulting prayers and freedom of worship have been one of the main characteristics of the decades of occupation.

2017 alone witnessed a series of assaults. The most recent incident was reported by Palestinian media on Wednesday, which said that dozens of settlers stormed the mosque from Al-Magharba gate chanting “Jerusalem is the capital of Israel,” in parallel to Trump’s announcement.

Hundreds of settlers stormed the mosque in May on the 50th anniversary of the occupation of East Jerusalem.

The situation escalated in the following months and more clashes erupted in Jerusalem, resulting in the killing of a dozen Palestinian people and the injury and arrest of hundreds of others.

This followed a Palestinian ‘day of rage’, after metal detectors were installed at the entrances of Al-Aqsa, in protest of increasing security measures at the site. This resulted in Israel removing them.

Attacks by settlers had also reached a peak between 2015 and 2016. Moreover, it was not the first time the holy site witnessed the killing of worshippers.

Goodman first killed and injured security guards then made his way into the mosque where he opened fire at worshippers, killing nine people, at least two of which were Palestinians.

Furthermore, the UN said that in an attempt to cover up Goodman’s attack, “a gang of Israeli troops directed heavy fire from various directions at Al-Aqsa mosque.”

In 1969, the UN Security Council grieved “damage caused by arson to the Holy Al-Aqsa Mosque in Jerusalem under the military occupation of Israel.”

The UN once more called on Israel to abide by the Geneva Convention and other UN decisions and to stop its measures to change the status of Jerusalem.

The blaze was initiated by Australian Denis Michael, who sympathised with the Jews.

The assaults on the holy site were not limited to the mentioned years, but took place nearly every year, even repeatedly within one year.

In October 1990, the first Al-Aqsa Massacre took place. “It was a massacre committed by the Israeli occupation forces with all its units; border guards, police, unidentified plain-clothed people,” the UN Security Council established.

Jewish extremist group Temple Mount Faithful, which rejects Muslim authority over the mosque, had planned to march towards it, sparking the gathering of dozens of Muslims there.

Israeli soldiers used live ammunition, then stormed the mosque, shooting at prayers, including women and the elderly. At least 18 people were killed, according to the UN, while higher numbers were reported elsewhere. Hundreds were injured.

A second massacre took place in 1996 when 63 people were reportedly killed and a third one in 2000 at the beginning of the second intifada.

In 2014, Israel launched Operation Protective Edge, which is estimated to have killed over 2,000 Palestinians in the Gaza Strip, the majority of which were civilians.

In 2012, in another air strikes operation over the strip called Operation Pillar of Defence, at least 167 Palestinians were killed, according to a BBC report in September 2014.

The report provided numbers for the previous 2008-2009 Operation Cast Lead into Gaza as follows: 1,391 Palestinians killed, including over 300 children and 100 women.

The United Nations Relief and Works Agency for Palestine Refugees (UNRWA) counted a total of 5,266,603 registered refugees as of 1 Januray 2016, distributed over the Gaza Strip, West Bank, Syria, Lebanon, and Jordan.