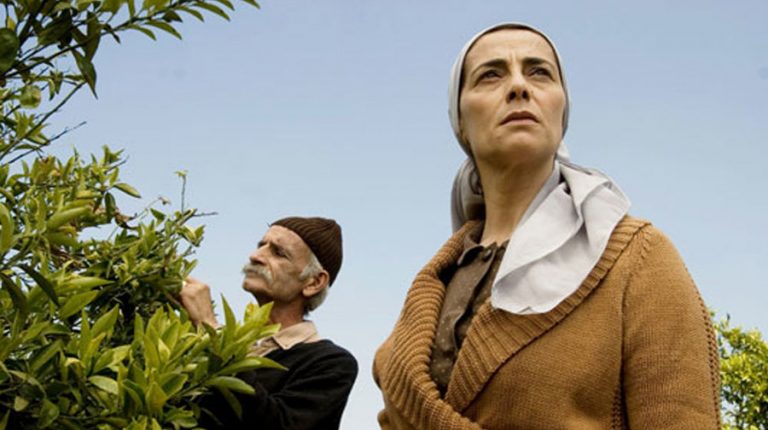 Lemon Tree brings the camera to the borders. The film takes place at the separation line, or the “Green Line”, that separates the occupied Palestinian territory of the West Bank from Israel. Unlike the checkpoints, the borders are not owned by any side. However, the ones who control the regulations on whom and what should pass are the ones in charge. This relation is visible in the film, where we see the Israeli side, represented by an Israeli Minister of Defence, who sets the laws and enforces them on the Palestinian side, represented by the owner of a lemon grove. This confrontation is prominent in the Arab-Israeli conflict, appearing in the film to describe the relations that exist between the controller and the controlled, the authorities and the subordinates.

On the one hand, there is Salma Zidane (Hiam Abass), a Palestinian widowed farmer who is cultivating a small piece of land which she inherited from her father, a lemon grove in the West Bank. Living off the little money from the lemon grove, and money sent to her by her son who works as a dishwasher in a restaurant in the US, she can barely manage, in addition to having siblings and daughters in Gaza and the West Bank who are bearing their own problems. On the other hand, there is the rich, newly appointed Israeli Minister of Defence Navon (Doron Tavory) who, with his wife Mira (Rona Lipaz Michael), is planning for a house-warming party in their new villa. Paranoid, the minister has army personnel, secret service body guards, and surveillance all around the house. Yet, he wants to remove Zidane’s grove as he saw it poses a threat to his house. Having martial law, the army, and the state on his side, the minister, ignoring reality, controls what right and wrong is. His wife, showing a more tolerant side, shows sympathy for Zidane, something that makes her clash with her husband several times. Zidane is left alone to fight this harsh reality with her lawyer Ziad Daud (Ali Suliman), who files a lawsuit and loses it in a military court, and then the two decide to escalate the cause to reach the International Court of Justice and the press.

The injustice is in the right to control not only the land, but also the lives of those who own the land. Salma Zidane did not just consider the small grove as capital to make money, but she considered it a part of herself. Both Salma and the minster live in what is theoretically an “in-between space”. It is neither his nor hers, yet the minister, for “safety reasons”, utilises the law, his law, to claim it as his own, by power if necessary. Hence, injustice is shown in the film, and puts Zidane in a situation where she fights the law, the minister, and the reactionary Palestinian National Authority.

The third party of the conflict here is the camera, which points out the prejudices and the fear that each side have. Between the barbed wire of the minister’s house and the lemon trees of the widow farmer, there is a border where ideologies and identities meet and interact. From one side, the minister, representing the Israeli state, looks at the grove as a threatening sign, because there is an anticipation that terrorists might infiltrate after hiding among its trees. On the other side, there is the widow that resisted the forceful cutting of her trees by the authorities, refusing to receive compensation. The camera played a crucial aspect in the film. From the side of the minister’s house, there are heavy security measures and there is also a newly planted tree in the shape of a menorah. On the other side, there are the natural lemon trees of the grove. The symbolism shown here is not religious, but ideological. The first side replants and reshapes the identity of the newly owned land. But on the second side, the tree takes the shape that the land wants.

The music of the film depended on the mood of the scenes. The tracks differed from traditional Arabic music when showing the crowded areas of the West Bank and its refugee camps. The songs turns into a cheerful oud tune when the camera shows the bright yellow lemons, but turns into a more sombre violin when showing the despair of the protagonists.

The dialogue in the film mixed between Arabic, English, and Hebrew, not only showing the complexities in this part of the world, but also showing that by time, a level of assimilation and acceptance can arise between the conflicting sides. Ziad, the lawyer, knows Hebrew to pursue his work. Samir, the caterer in the Minister’s house, speaks fluent Hebrew with his customers. The liberal Israeli journalist who published the full story of the trees knows Arabic and uses it to contact Zidane. Also, the guard at the grove, armed with guns and rifles, speaks with Zidane in Arabic to convince her to leave the territory. Zidane replies in broken Hebrew saying that long ago, her father took her to Israel to sell lemons, only for a secret security agent to come and break a smiling conversation. In the international court, while presenting an appeal against the order to cut down the trees, Abu Ziad, an elderly man who helped Zidane take care of the lemons, spoke Arabic in front of the court, while emphasising the meaning of some words in Hebrew, like the words land, hope, and people. Finally, the minister’s, who always spoke in Hebrew, shouted in Arabic to apologise to Zidane as some guards tried to take lemons from her trees without permission.

The exchange of language shows the many humane sides of the conflict; the angry prime minister, the desperate widow, the passionate lawyer, the assimilated Arab-Israeli caterer, the friendly IDF soldier, the depressed wife of the minister. All the characters shows how complex the conflict is and how it is no longer separated into Israeli and Palestinian. Although, the borders create this separation, the film argues that human feeling goes way beyond cement walls.

One of the most telling scenes is of the trial session were Zidane and her lawyer hear the decision of the judge who asserts that based on the “Intifada Act”, any threat to the Jewish people should be terminated, hence ordering the cutting of the grove. The director showed Zidane’s tears, but her face was still; only the tears were moving. With full determination, she decided that she will go the International Court of Justice to appeal against the Israeli military court. In many respects, it represented certain aspects of Palestinian resistance. The scare and the pain is there, present in the tears. The determination and dignity is there, with the steady, solid look. The resistance is there, with Zidane’s desire to further escalate the case against all odds; the aggressive occupation, the reactionary Palestinian Authority that does not want to get involved, the patriarchal society she is living in, where she is suspected of “betraying her dead husband” with her lawyer.

The film ends with half of the grove being cut down and a huge cement wall built to separate Zidane from Navon. The big wall leaves whoever watches the film questioning whether half-measures are a suitable solution to the crisis. Mira asks the prime minister if this is the solution, accusing him of always ignoring reality. He answers saying that for three thousand years, no one has found a solution. It seems that Navon, along with the Israeli authorities, are answering this question by ignoring reality and building a wall around them, thinking this will be the answer. A historical angle here is discussed by Navon as he reaches the conclusion that for ages, the conflict has been going, so it is just easier to cut the trees and compensate the widow, so that the problem can end; a vision that is popular in Israeli policy-making.