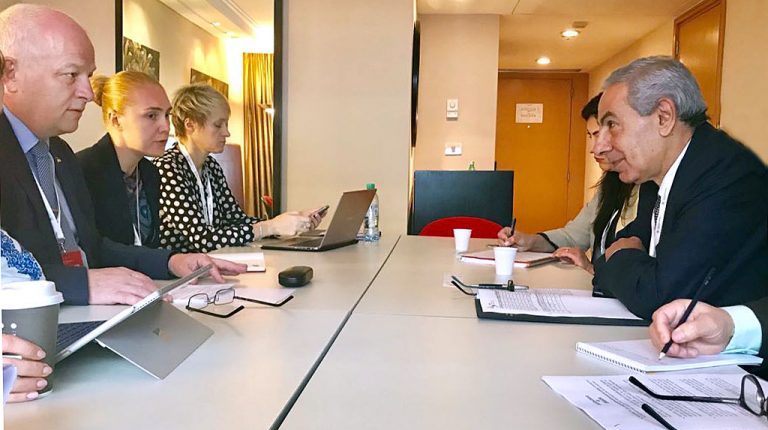 Minister of Trade and Industry Tarek Kabil met with First Deputy Prime Minister and Minister of Economic Development of Ukraine Stepan Kubiv and the ministers of foreign affairs and trade of Brazil, on the sidelines of the World Trade Organisation (WTO) 11th Ministerial Conference.

Kabil announced that the upcoming period will see joint Ukrainian-Egyptian coordination to resolve obstacles restricting entry of Egyptian exports into the Ukrainian market, especially since the trade balance between the two countries is in Ukraine’s favour. He noted that a meeting will be held between export officials in both countries early next month.

The volume of trade exchange between Egypt and Ukraine during the first half of this year increased by 4% to reach $1.255bn, compared to $1.206bn during the same period last year.

Kabil also met with Brazilian Minister of Trade Marcos Pereira and Aloysio Nunes, minister of foreign affairs. Kabil said that he is currently conducting a study to establish a joint economic Egyptian-Brazilian committee to enhance cooperation between both countries in different service and production sectors, noting that establishing it will contribute to creating a leap in the rates of trade exchange and investments between both countries.

Kabil noted that the discussions also included the importance of speeding up the formation of the Brazilian side in the Egypt-Brazil Business Council to speed up its cooperation with its Egyptian counterpart in terms of encouraging countries of both sides to establish investment partnerships.

The volume of trade exchange between Egypt and Brazil during the first nine months of this year increased by 26%, reaching $1.867bn, compared to $1.478bn during the same period last year.

Exports of engineering industries aimed to increase to $30bn: Aboufreikha